Started as a riff on this and predictably spiraled out of control. So blame Blutarsky. 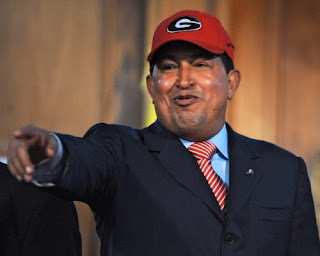 VERNE LUNDQUIST: We're back with the start of the fourth quarter here in Maturín, Venezuela, where the Venezuelan government has graciously invited the Georgia Bulldogs to play their entire home schedule in 2009 -- and the Dawgs have, uh, risen to the occasion, leading the Gamecocks of South Carolina sixty-three to nothing, though I think most of the people on either side here at Estadio Monumental de Maturín would have to agree that the Dawgs have built that lead through some . . . pretty creative application of the rules, wouldn't you agree, partner?

GARY DANIELSON: Yeah, president Hugo Chavez has been a pretty constant presence on the Georgia sideline the entire game -- you can see him there conferring with Mark Richt -- and he's also been shadowing the referees pretty closely. I can't think of a single call when he hasn't been standing right by the referees, and even conferencing with them in a lot of cases -- and you know Steve Spurrier is just livid about that, but honestly it just doesn't look like there's a lot he can do.

LUNDQUIST: At the start of the fourth, Dawgs have the ball at the Carolina 17 after a long punt return by Prince Miller -- refs originally put the Dawgs back deep in their own territory after a block-in-the-back penalty, but that penalty was overturned after another one of those "conferences" with Chavez. First-and-10 now, Dawgs in the I, A.J. Green split wide at the bottom of your screen. Logan Gray takes the snap from under center, he's looking, nobody open, cuts back to his left, one man nearly gets a hand on him, but Gray is scrambling -- looks right, ball is in the air -- CAUGHT by Green in the end zone! Touchdown, Georgia, if it stands -- ohhh, but there's a flag.

DANIELSON: Yeah, number 96, Clifton Geathers, was pretty obviously held by Cordy Glenn on that play, Glenn had both hands on the back of Geathers' jersey.

LUNDQUIST: Let's go down to Penn Wagers and see what the call is.

LUNDQUIST: Oh, my, President Chavez is out on the field, and he does not look happy. Very forceful, uh, "conference" there with Wagers, and now it looks like two bodyguards -- well, we don't know that they're bodyguards, but they're armed -- are coming to back Chavez up. Wagers is waving his arms, uh, all right, here's the call.

WAGERS: Uh, upon further review, we have a, uh, the quarterback was outside the tackle box and the offensive lineman in question released the jersey with his, uh --

WAGERS: -- uh, right hand, therefore there is no flag, the touchdown is good.

LUNDQUIST: Wow. Wah-how! Quarterback was outside the tackle box, offensive lineman had both hands on the defender's jersey but released with his right hand, therefore there's no holding penalty -- Gary, are you familiar with this?

DANIELSON: No I am not, Verne, and it looks like this is another one of those "artful" interpretations of the rules that you were referring to. We've seen a lot of those from Chavez today.

LUNDQUIST: Well, whatever his reasoning was, the touchdown will stand, and the Dawgs are on now for the extra point. Walsh's kick is up, and it is good -- with fourteen-fifty left in the fourth quarter, Georgia now leads 70 to nothing, and with that kick by Walsh, the Dawgs have scored their highest point total since beating Northeast Louisiana 70 to 6 on September 17, 1994.

DANIELSON: And that's with nearly a full quarter left to go!

DANIELSON: And the thing is, Georgia's offense hasn't looked bad out there today -- Joe Cox had a good day, Caleb King has had a pretty good day, but the one really imposing his will out there on the field is Chavez. I mean, he's been like a 12th man out there for Georgia nearly the entire game, and South Carolina just hasn't had an answer for him.

LUNDQUIST: And you can see the frustration in the face of Steve Spurrier -- he didn't want to come down here to play this game, lobbied against it, but came anyway under threat of forfeit, and now it looks like his Gamecocks are going to go home smarting from their worst defeat in quite some time. Not how the Ol' Ballcoach wanted to kick off a make-or-break SEC season with this young team of his. All right, Georgia set to kick off once again, and -- they're at midfield again, I'm assuming this is a result of President Chavez's new rule that teams who score touchdowns get to kick off from the 50. Walsh boots a line drive, and not surprisingly, it's out of the end zone, so a touchback for the Gamecocks, they'll start at the -- well, their own 20. Interesting, Chavez made them start from the 5 the last time that happened. An unusual bit of charity there from El Presidente.

DANIELSON: Yeah, and you're kind of seeing the unpredictability that Chavez brings to this game -- South Carolina just never seems to know what he's going to do next, and that's really hurt them out there today.

LUNDQUIST: Well, it looks like Stephen Garcia will be the quarterback for this series -- and the redshirt sophomore from Tampa has not had a good day: 2-of-39 for 15 yards and five interceptions, and get this, he's had seventeen completions negated by offensive pass-interference penalties. Now, that has to be some kind of record.

DANIELSON: Yeah, we knew South Carolina's receiving corps was gonna be a bit of a liability early in the season with Kenny McKinley and Jared Cook both gone, but the receivers just have not helped out their QB today. Now, a lot of that certainly has to do with Chavez's influence, but still, not a performance Steve Spurrier is going to be very happy about on the ride home.

LUNDQUIST: First and 10 now, Gamecocks at their own 20, Brian Maddox the lone setback, Garcia in the shotgun. Garcia takes it, drops back, launches it deep, and -- oh, wide open in the middle of the field is Jason Barnes, who slips one defender and makes it down to the Georgia 16 before being brought down by Bryan Evans. Sixty-four-yard pass play from Garcia and the Gamecocks are in business deep in Georgia territory.

DANIELSON: And you see here on the replay, it looks like there was some miscommunication between the Georgia defenders on that side of the field, because Quintin Banks, the safety, is covering Barnes right here but then he breaks off to cover number 83, I don't think he knew Brandon Boykin had number 83 in the flat. That leaves Barnes to just head straight up the middle of the field, and the pass from Garcia is right on the money. Well, you can say one thing for the Ol' Ballcoach, he's not giving up, in spite of all the obstacles, to be dialin' up a play like that --

LUNDQUIST: So it's first and 10, Gamecocks, at the Georgia 16, and the play clock's already down to -- oh, good gracious, they're gonna have to burn a time-out here --

DANIELSON: Where's the quarterback? There's only 10 South Carolina players on the field, and I don't even see Garcia on the field --

LUNDQUIST: Part of their problem, of course, is that the play clock has been cut down to 15 seconds for the visiting team, but still, no sign of Stephen Garcia anywhere, and now Spurrier is sending -- Aramis Hillary, the sophomore from North Augusta, out onto the field.

DANIELSON: Did Garcia get hurt or something on that play? It didn't look like anyone got a finger on him.

LUNDQUIST: Let's go down to Tracy Wolfson on the field, who can maybe shed some light on this for us. Tracy, what have you got for us?

TRACY WOLFSON: Guys, shortly after the last play was over, Garcia was running up the field for the next play but only made it to about the 40 before a couple of official-looking gentlemen came and escorted him off the field. I'm told that they were with the General Intelligence Office of Venezuela, and folks down here say they don't know where Garcia is being taken, but that he'll be fine, they probably just want to ask him a —

VENEZUELAN LAW-ENFORCEMENT OFFICIAL: No pictures. No pictures. Everything is fine. You come stand over here, please.

WOLFSON: Uh — OK. OK. Anyway, uh, the point is I wouldn't expect to see Garcia back on the field today. Verne?

LUNDQUIST: Mmmm. Another tough break for South Carolina and the Ol' Ballcoach, who's taken a time out here to try and sort things out. Probably not a bad idea, and we'll take it with them, as the Georgia Bulldogs appear to have things well in hand, 70 to nothing over South Carolina. We'll be back to Maturín, Venezuela, after a word from our sponsors.
Posted by Astronaut Mike Dexter at 11:48 PM

"Walsh boots a line drive, and not surprisingly, it's out of bounds."

"Walsh boots a line drive, and not surprisingly, it's out of bounds."

Very funny! I enjoyed this! Thanks!