A memo from the desk of Arnold T. Pants, Esq.:
In which our signing class includes Marlon Brown, two scorching Poles, and the best cake ever. 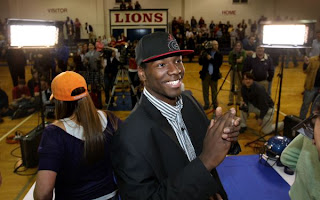 · So, National Signing Day? Yeah, I got a nice little surge of giggety upon finding out that Memphis's Marlon Brown (above) said no thanks to Kiffykins and instead signed with the Dawgs, but otherwise, I'm still of the opinion that recruiting is to college football what carrot sticks are to after-school snacks: It's something, yeah, but it's not really what you want. Georgia landed another top-10 class? Fine, that's enough for now, wake me when the season starts and we can actually see whether any of these guys are any good on the field or not. (Actually, go ahead and wake me on Saturday, April 11, when the G-Day game rolls around. Yes, there's gonna be another G-Day tailgate -- stay tuned for details.)

· Here's what I do love following on signing day, though: wacky names. I've all but decided that if my kids are ever going to get noticed enough to get a chance to play at the D-IA level, I'm gonna have to give them some wild-ass names, so I've come up with a plan: I'm gonna write down different nationalities and ethnicities on little pieces of paper and put them in a hat, and each time I have a kid I'm gonna pull out two of those pieces of paper to come up with a name. Starting in 20 or 25 years, the Jamie Newbergs of the world will be writing about Fulgencio Soichiro Gillett, Jean-Claude Mohandas Gillett, Klaus ibn al-Kalb al-Thawr Gillett, Vladimir Dikembe Gillett, and Aristotle Running Deer Gillett, so be warned, football fans.

· On the subject of families and genetics (yeah, this is a major stretch, stay with me): I'm a long-established fan of Polish supermodel Joanna Krupa, for obvious reasons, only now it turns out she has an equally ridiculous sister, Marta. 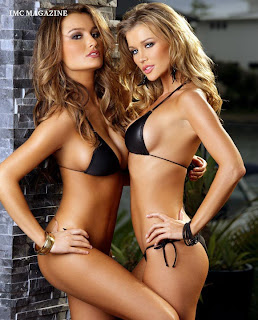 So my question is, how does one family end up with this kind of offspring? Were they grown in a lab? Or did their parents put each and every sperm cell through an intensive interviewing process before narrowing it down to a select group of potential haploids? I'm just asking.

· While I was talking on the phone with my mom the other evening, she mentioned that she'd recently seen the trailer for a movie about two guys who sign up for the high-school cheerleading squad so they can go to cheerleading camp and score with hot chicks. "I can't remember the name of it, but it's got hot girls running around in short shorts," she told me. "So I knew it'd be right up your alley." Boy, does she know me. I presume she was talking about this:

The thing is, I can't even promise that I won't end up going to see it, even if it is, in the words of one noted trashy-movie connoisseur, "that one moment in 'Bring It On' made into a movie." I think I'll be able to restrain myself from adding it to my DVD collection, though, as girls tend to get kind of a funny look on their faces when you bring them back to your place and they see stuff like that sitting on your shelf.

· Courtesy of said trashy-movie connoisseur, we have this feast of awesomeness, which is gonna be the groom's cake at my wedding if I have anything to say about it (and, of course, if I ever have a wedding): 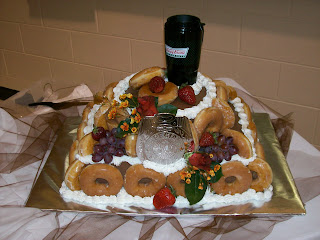 · And finally, since I seem to be unable to go more than a few weeks without mentioning Legos on this blog, I thought this little photo essay was kinda cool. 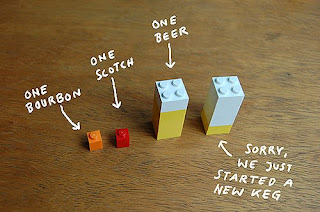 I realize this is sort of inside-baseball New York stuff, but the thing is, I got it. Maybe I've been to New York enough times that I'm starting to get this kind of stuff? Or maybe it's just because I know Legos THAT WELL?
Posted by Astronaut Mike Dexter at 10:21 PM

I felt a little bad that I laughed at the end of that trailer. It must have numbed my brain cells enough.

Good to hear the G-Day tailgate is stayin' alive... I believe my lady and I will be there with beer and donut in hand, attempting to climb trees inebriated.

I've never been to New York, yet I still enjoyed the Lego essay as well.

Hasn't the blond dude in that trailer been playing high school dicks for, like, 5 or 10 years now?

Yeah, Will - I was discussing that elsewhere. He was a high school senior in Not Another Teen Movie eight years ago.