A memo from the desk of Arnold T. Pants, Esq.

(This is the new name of the occasional Mystery Meat feature, by the way. First commenter who can tell me who Arnold T. Pants is gets a prize, which is . . . the joy of a greater mastery of obscure trivia than other people's, I guess.) 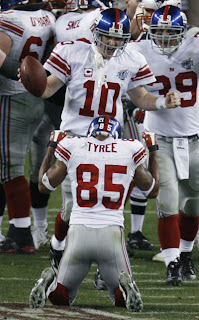 · Eli Manning, I owe you an apology, and I take back every bad thing I ever said about you. That scramble-to-evade-a-sack-and-then-throw-a-45-yard-pass play was the kind of thing that gives birth to legends, but even if there hadn't been any eye-popping plays like that, I can promise you, Eli, the rest of the country would still be willing to confer legend status upon you simply because you've saved us from having to watch the Patriots get fellated for the next 12 months. Seriously, Boston sports fans, it took you 85 years to gain our sympathy but only four years to become unbelievably annoying. As for me, I've foregone my usual morning coffee today for a nice tall glass of Bill Simmons's tears.

· If y'all live in one of the Super Tuesday states, you may have noticed that Barack Obama aired a campaign ad during the second quarter of the Super Bowl. Maybe one of my readers with a greater knowledge of media history than I have can answer this for me -- has a presidential campaign ad ever aired during the Super Bowl before? This one seemed like a first, probably because the Super Bowl was held later in the year than ever before while the primary season has kicked into gear earlier than ever, but maybe one of y'all can tell me about another one.

· As for the rest of the Super Bowl ads, they were better than last year, but still mostly sucked; I did, however, like the ones for Bridgestone tires and the "carrier pigeon" FedEx spot, which bucked the long-established trend that any Super Bowl ads featuring animals given humanoid characteristics are 78% more likely to suck than a comparable non-critter ad. And, of course, I enjoyed the Victoria's Secret ads. Sometimes simplicity is better; you don't need a clever joke or a lot of CGI, you just need a supermodel in her undies.

· On that note, she didn't appear in the Super Bowl spots, but the Victoria's Secret newbie pictured above, Candice Swanepoel, was brought to my attention over the weekend; apparently she hails from South Africa or something. Here's another challenge for you readers: correctly pronouncing her last name. (Just for the record, I don't know how to do it. Your guess is as good as mine.) 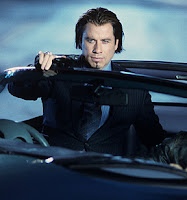 · Now that Britney Spears is in the hospital once again and her pal Sam Lutfi has been handed yet another restraining order, I think it's time to address Mr. Lutfi directly: John Travolta from "Swordfish" called, and he wants his chin-gina back.

one of the personas Chevy Chase played in Fletch

I liked the screaming animals ad. Yeah, I fall for anything that's furry.

I believe Arnold T. Pants was the "Attorney for the former Mrs. Irwin M. Fletcher."

You got me Doug, I am voting for Obama on Tuesday. I have no idea how Missouri is going to go, there was a huge turnout for Bill Clinton in Springfield Saturday night, but this race will be decided in the I-70 corridor. trust me folks, Hillary Clinton cannot win Missouri against John McCain. They have hated her since they were introduced to her in 1991. Besides, Obama is 21st Century, and that is what we need!

I'm voting for Romney. I know, you're shocked.

Pretty sure that was a local ad, not a national Obama spot. Fox had said they were airing no political spots, but that doesn't mean the Obama campaign didn't buy time on some local stations. The local affiliates get a few breaks during the game, usually around halftime.

According to the USA Today, the Obama commercial was run in tomorrow's primary states.

It was funny that as soon as it came on I turned to my gf and promptly asked her if that was the first time it had ever happened and she said that they actually talked about that last week in her campaign politics class and that it had never happened. Apparently some ppl believed that it was just going to far. Well, apparently not to Barack because he wants votes baby!

Obama commercial: It was run in the N.VA area, and we do not vote until next week....

It would be pronounced (Swan-a-pool). It is useful to have SA-Dawg readers.