Don't forget:
Vote for Barack! (And Yours Truly.) 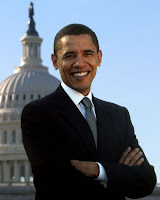 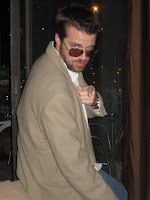 Obama/Gillett: Your winning team in '08. Seriously, we could be twins.

This is just a reminder for everyone out there in SuperTuesdayLand to get out there tomorrow and vote, preferably for Barack Obama -- and if you're one of the lucky so-and-sos who happen to live in Alabama's 6th congressional district (which includes suburban Birmingham and Shelby, Chilton, Bibb, and northern Tuscaloosa counties; check your local listings), you can vote for me as an Obama delegate to the Democratic National Convention.

If you vote for me, I promise not to embarrass myself or my state at the DNC. I know that sounds like an impossible dream, but hey, this campaign's all about hope, right?

For reals, no matter which party or candidate you're behind, go vote. This might just be the most important election of my lifetime, and it's too important for you not to have a say in it.
Posted by Astronaut Mike Dexter at 9:17 PM

I did not know you were running - I just cast my absentee ballot, and would have written you in, as I would certainly support your candidacy! Boy, would the government be lively with you running the show!

You're the only Democrat I would ever vote for.

(No, just kidding. I wouldn't vote for you.)

Really torn about voting today; both Obama and Hillary have me excited about this election but for different reasons. I had to choose, so Obama it was. You, too. Good luck - it'll be an incredible experience for those who get to go.

Appreciate the political commentary along with FB content; I'm a sometimes-visitor who went to Michigan.

Post a few days ago almost makes me go with Obama, but I'm really stuck on differences vs. Hillary's healthcare plan. Now living in MN, I have 3 hrs to decide before my caucus starts up.

I just have to point out that the banner ad at the top of the page right now is one to get Ann Coulter's articles emailed to you every week. I thought that was fitting, especially given how much you (and we all) love her!