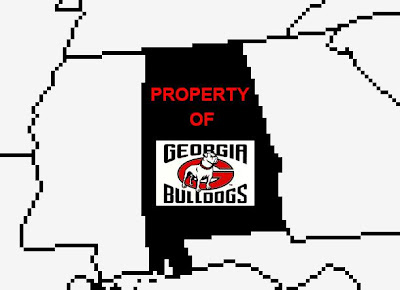 It's great to be a Georgia Bulldog, as the post-victory chant states, but it's a particularly good time to be one living in the state of Alabama. Observe:

That's all four D-IA programs in the state of Alabama, conquered (one of them twice), and by an average of 19 points per game.

Think we need to start in on the D-IAAs, or should we pick a new state? Florida's looking pretty ripe at the moment . . .
Posted by Astronaut Mike Dexter at 1:09 AM

Email ThisBlogThis!Share to TwitterShare to FacebookShare to Pinterest
Labels: football, georgia bulldogs, gettin' my gloat on

Thanks for the reminder, Doug. I'll look forward to your breakdown of the game this week. It feels damn good to put whippings on Auburn in consecutive years.

If we now own Alabama, can we now take their water?

And who predicted this win when all the naysayers picked Georgia to lose?
Yep, that's right, Ole Zen Bubba (with a somewhat reluctant concurrence from Beast in Bama.)

Yep, the folks snickered at the time are now wanting me to meet their moms so they can have little brothers and sisters with the gift of football prophecy that I have, which is ok as some of their moms are hot in a milfish sort of way.

Congrats on a great win, and remember that good always vanquishes evil. Eventually.

All hail! Zen bubba! I do think we may have to share the state with Sly Croom.

Hell, if we're smart, we'll schedule and exhibition with UAB for mid December before the bowl game to complete the sweep.

I believe STATE owns the Bama as well.
They took down UAB, Auburn and BAMA this season.

Does this mean we FINALLY get a damn lottery?

As for the game - what happened? Everything was going according to the script, 20-17 Auburn in the 3rd, and I'm ready for the always great punch-counterpunch of AU/UGA the rest of the second half. Instead, Moreno throws a haymaker and the Dawg running backs go nuts all of the sudden.

Zen Bubba, all true disciples must have their faith tested at some point - won't happen again.

Think nothing of it Bib, you followed when others were too fearful to tread.