The Friday Random Ten+5 enters a realm of eternal torment.

Last week, as Halloween was approaching, my sister and I talked about going to a "Hell House" or "Judgment House" -- one of those non-scary haunted-house facsimiles that conservative Southern Baptist churches put on to show you the horrible torment that results from drinking alcohol, smoking pot, having premarital sex, or basically doing anything your average American might find remotely enjoyable. We would've gone just as a joke, of course, but it gave me an idea for a Hell House that would be actually terrifying -- full of things that I, at least, would find hellish. Here, then, are Five Main Features of Doug Gillett's "My Own Personal Hell House," coming October 2008 to an apartment nowhere near you: 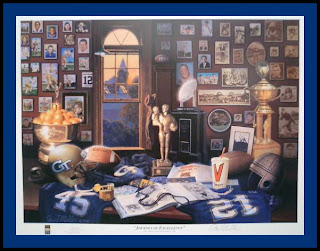 The Hall of Georgia Tech Memorabilia
Like any good haunted house or "hell house," this one would start out eerily familiar -- in fact, as you walk in the front door, it looks almost exactly like my current apartment. But then you start to notice some frightening differences. Instead of a Georgia Bulldog flag hung up in the window, there's a gold GT flag. Instead of a black fleece pullover with a Georgia logo draped over the chair, there's a pee-yellow Starter jacket with "TECH" on the back in huge letters. And instead of a Mark Richt Wheaties box, a ceramic bulldog, and a Coke bottle commemorating Georgia's 1980 national title on the mantle, there's a model of the Ramblin' Wreck and a poster saying "You Gotta BEElieve!" Not only does it suck, it's guaranteed to not even remotely jibe with any color scheme you could possibly want in your home. (Oh, and when you open the closet, instead of the #4 Georgia jersey that would usually be there, you find Reggie Ball, throwing heavy objects at you. Fortunately, being Reggie Ball, he misses you by at least three yards every time.) 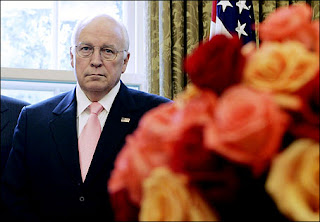 President Dick Cheney
In my own personal hell, the government has conjured up another one of its suspiciously timed terror warnings right before the 2008 election -- terrorists determined to blow up Slurpee machines at 7-Elevens across the country, or something -- so VP Cheney has taken it upon himself to indefinitely postpone the election, declare martial law, and assume the presidency as George W. Bush decides to leave politics for good and retire to Crawford to cut brush. Within a year, habeas corpus has been suspended and we're required to display portraits of Cheney in our homes as a show of loyalty. That's really the only noticeable sign of Cheney's presidency in the My Own Personal Hell House, other than constant TV news reports revealing that we're at war with 71 of the world's 187 sovereign nations. (Including Canada, as Cheney's new secretary of homeland security, Tom Tancredo, felt that their round bacon was undermining traditional American breakfast values.) 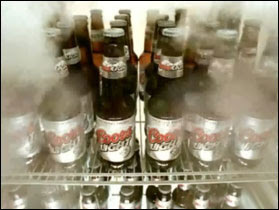 The Refrigerator of Watery Doom
Between the Georgia Tech junk and the implied collapse of Western democracy as we know it, you're rattled now, and what you really want more than anything else is a drink to calm your nerves. What luck! As you enter the kitchen, there are signs proclaiming free beer in the fridge. But you open the door to find . . . nothing but Coors Light, the sex-in-a-canoe of beers. Yeccchhh! Dejected, you go to the sink and pour yourself a glass of water -- pretty much the same thing, really -- and wonder when this experience is going to be over. 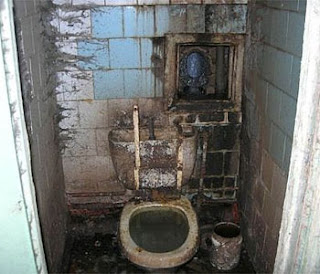 The Unusable Bathroom
There are a pair of gigantic brown trouts floating in the toilet, it's crammed with toilet paper, and it won't flush. (OK, that's not all that scary per se, but people who use public toilets and then don't flush are in the top ten of my all-time list of pet peeves. Come on, people, the flush handle isn't going to kill you. Grow a pair, flush the damn toilet, wash your hands, and get on with your lives.) 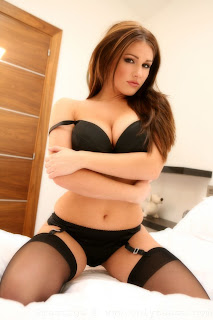 Satan's Cockblock
Your heart in your throat, you gingerly open the door to the bedroom, and as it creaks open, you find . . . British supermodel Lucy Pinder, all 32GG-26-34 of her, sitting on the bed in her undies. Well, this isn't so bad! "I've been waiting for you," she says as she saunters over to you. She's just about to throw her arms around you and probe your trachea with her tongue when the door flies open again. It's Brooke, this girl I (unfortunately) used to date when I lived in Atlanta -- she's eight months pregnant . . . and she says you're the father. Noooooooo!!!! . . .

Horrible, isn't it? "Saw IV" has nothing on this place.

Now that you've calmed down and gotten your heart rate back to normal, here's the Ten:

Incidentally, none of these songs would be playing at the My Own Personal Hell House because it'd have Britney Spears's Blackout on automatic loop. All right, readers, how about you? Share with us your own Random Tens and/or personal hell(s) in the comments.
Posted by Astronaut Mike Dexter at 7:55 AM

I don't know how the hell you got in my home and took a picture of my bathroom, but I am going to find out!

If anything, you underestimate the worthlessness of Coors Light.

I have a theory, based on extensive personal experience, that CL contains a sobriety agent that nullifies the effect of any beer previously imbibed.

Agreed on all account, except maybe the Coors. I've found that when extremely desperate and taken in mass quantities, Coors light does still, in fact, work.

Completely disagree on the Coors Light. Make no mistake, when I grew up a little bit after school I developed an appreciation for beer that actually tastes like beer, but budgetary limitations during grad school years later reminded me of the inherent goodness in a beer that goes down like a glass of water.

iPod offers up the following:

Budgetary limitations = Coors Light?!! I don't recall CL being popular with us thrifty lads back then. It was more like Old Milwaukee, Schaefer Light, and PBR.

Coors Light has nothing on Milwaukee's Best. Just eww.

The 24 beers to drink when you can only afford to drink 6 beers.

Why pick on Coors Light? All the mass-produced American light beers (Bud, Miller, Coors) taste pretty much the same to me.

Not only that, but didn't the Coors family fund some right-wing think tanks? It's fire-brewed Stroh's for me.

Amen on the toilet-flushing. If you don't want to touch the handle, you can kick-flush it with your toe. Pretend you're Steven Segal or something

Love the site, been reading for a while, but this is my first post.
Random Top Ten
1. Closing Time - Semisonic
2. Strength of the World - Avenged Sevenfold
3. Young Pilgrims - The Shins
4. Invisible Sun - The Police
5. Return - OK Go
6. Anna Molly - Incubus
7. Glittering Blackness - Explosions in the Sky
8. Eria Tarka - The Mars Volta
9. Odalisque - The Decembrists
10. Such Great Heights - Iron and Wine