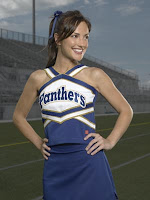 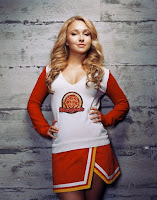 · The Web site Friday Night Lights Insider has an amusing "tale of the tape" pitting cheerleader Lyla Garrity (played by Minka Kelly) against Clare Bennett from "Heroes" (played, of course, by Hayden "She's Legal, So I May Still Be A Sicko, But At Least I'm Not Going To Hell" Panettiere). Not surprisingly, Lyla won, but I wonder if the contest would've been closer had they known that Clare, I mean Hayden, risks her neck to save dolphins from being slaughtered in Japan. Which is more active than anything I've done over the past few weeks.

Well, no, I take that back -- this past Saturday I found a family of loose beers that had no place to live, and they were so poor they were having to take refuge in a refrigerator. A refrigerator, y'all. They were just sitting in there, shivering, so I took them all out and gave them a nice warm place to stay in my tummy. And then I let them watch the Navy-Notre Dame game with me. 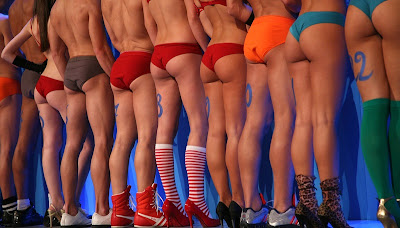 · On a more serious note, last week was the World Backside Championships held in Berlin, sponsored by European underwear maker Sloggi. I think this is a great thing, but I hope that the judges' credentials are all tip-top and the method for selection/ranking is scientific, airtight, and closely monitored. A title like "World's Best Ass" is far too important to just be handed out willy-nilly.

· YesButNoButYes does some exhaustive investigative work to find out what happened to Jackie Chiles, Crazy Joe Davola, Sue Ellen Mischke, and a whole slew of minor characters from various "Seinfeld" episodes.

· My favorite YouTube of the week: 340-lb Detroit defensive lineman Shaun Rogers picks off Denver's Patrick Ramsey, stiff-arms Selvin Young into Lake Michigan, and races 66 yards to paydirt. Well, no, I think you'll find there was no "racing" here. "Rumbling," maybe. Or perhaps "chugging"? Here, decide for yourself:

· The fact that the Georgia-Florida game took place in Jacksonville did not prevent the UGA students who stayed behind from keeping alive the tradition of ringing the victory bell on North Campus after the big win. In fact, they rang the shit out of it -- to the point where the yoke holding the bell broke. The welders at UGA's Physical Plant apparently worked around the clock to fix the yoke in time for the homecoming game against Troy last week, and as far as I know, it was back up and being rung like crazy on Saturday. Yes, at Georgia our celebrations are so hard-core we've been known to snap cast-iron yokes in two. Don't mess with us!

· No, really, don't mess with us. We're wild, we're drunk, we had to hold in our Number Twos all Saturday long -- seriously, there's no telling what we might do.

Sorry, Mr. Hankey, but for your own good it's better if you stay home.

Posted by Astronaut Mike Dexter at 8:27 AM

Shaun Rogers is da MAN!!! He finished the drill!!! David Pollack got so tired during a run like that he had to try and hand it off to a trailing (well, maybe not trailing, exactly) teammate which nullified the score, and lost a big game for us. And Pollack actually played running back in HS. And he was famous for his motor and energy. So here's to you Shaun Rogers, striking a blow us fat tubs of goo!

I don't know if you watch Heroes or not, but Claire was looking H-O-T last night. She even looked a little taller.

When I saw the article about the whaling protest yesterday, I thought of you... because it was Hayden and because it was just the type of things a liberal would do (not that there is anything wrong with that).

The bell was indeed fixed for Saturday. Just in time for 500 six-year-olds to ring it. Huzzah.

Unless said six-year-old is like some of the kids I saw in Kroger the other day, the bell will LAUNCH them. It can give a good lift to a grown-ass man, I'm thinking 6-year-olds take off, land mostly unscathed and a video finds its way to YouTube.

I'm trying to watch heroes, but I missed season 1 and parts of season 2, so I have no clue what the hell's going on. Or just how short Hayden is.
In other news, the chick on Chuck is quite fetching. And the show's pretty good too.

will, do whatever it takes to watch the first season of Heroes. Lie, cheat, or steal. You will be forgiven. It's a fun show.