BlogPoll ballot #14: In which I play the part of the big fat lazy sack of crap.

The Green Bay-Detroit game kicked off at about noon on Thanksgiving Day. From then until I left to come back to Birmingham on Sunday afternoon, it's safe to say I did nothing but eat, sleep, and watch football.

In short, it was glorious. In the words of Ron Livingston's character from "Office Space," "I did nothing . . . and it was everything I thought it could be."

OK, here's my thinking on the Who's-Number-One thing. 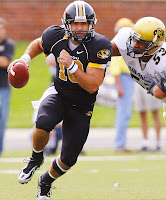 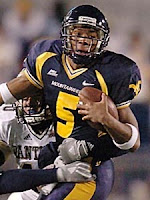 With these rankings, I usually try to lean a little toward a "power poll" -- i.e., #1 would beat #2 on a neutral field, #2 would beat #3, and so on -- as opposed to strict rŽsumŽ ranking. I think Mizzou, with a more balanced offense and a better defense than people realize, would beat WVU on a neutral field, but in the end I really don't have any idea. So let's look at the rŽsumŽs.

Missouri's best win is obviously their fairly dominating performance against then-#2 Kansas. West Virginia's? Ehrm . . . probably last week's 66-21 dismantling of a ranked UConn team (whose defense was supposed to be pretty decent). Advantage: Mizzou, by a nose. Next two best wins: Missouri beat an Illinois team that would go on to finish 9-3 and held a ranked Texas Tech team to just 10 points; West Virginia outlasted 9-3 Cincinnati and annihilated Rutgers, both on the road. Advantage: I'm going with Mizzou there, too, but by an even slimmer margin. Next two best wins: Missouri beat Texas A&M by 14 and Colorado by 45; West Virginia beat Maryland by 17 and East Carolina by 41. Man, this is hard . . .

OK, let's do losses. Missouri briefly led currently 9th-ranked Oklahoma before succumbing to a turnover-induced swoon and ended up losing by 10 in Norman; West Virginia went down to Tampa, committed six turnovers, and lost by eight to currently 25th-ranked South Florida.

If West Virginia had beaten last year's Louisville team by 7 and Rutgers by 28, that might be enough to earn them the top spot, but this year's Big East just isn't that great. For notching marginally more impressive big wins and having a less embarrassing loss, Missouri gets my #1 vote. Which means, this season being what it is, that they're going to get destroyed by Oklahoma in the Big 12 title game this weekend.

5. Southern California (12)
Did y'all see what they did to Arizona State, in Tempe, on Thanksgiving night? Yikes. Whatever ailed the Trojans while they were losing to Stanford and dicking around with the likes of Arizona earlier this season, it doesn't appear to be ailing them now.

9. LSU (1)
Eight spots might be too far to drop the former #1 for a three-OT loss to an underrated opponent, but the loss to Arkansas was the culmination of a nearly month-long stretch in which the Tigers really hadn't played like the top team in the country. The defense, in particular, seems to have fallen way off the unit that shut out Mississippi State and destroyed Virginia Tech earlier in the season.

13. Tennessee (18)
They've gotten reeeeeal lucky over the past few weeks, but it's not like LSU hasn't gotten plenty of lucky breaks themselves. I'm betting that this year's SEC title game goes right down to the wire.

15. Hawaii (23)
OK, fine, give 'em a BCS bid. After last year's Oklahoma-Boise State matchup in the Fiesta, I'm sure that both LSU and Tennessee are thrilled at the prospect of facing a pass-nutty WAC team they will get no credit whatsoever for beating, but peals of ridicule for losing to.

23. Connecticut (19)
Somebody in the Big East front office needs to do some serious revamping of the conference's bowl structure, because the Huskies may have gone from "OMG what if we beat West Virginia and get a BCS bid?" to "Yay, Meineke Car Care Bowl" in the span of four hours.

Funny how Clemson beats SC again and you can't find a way to swallow the "SEC" is over-rated pill.