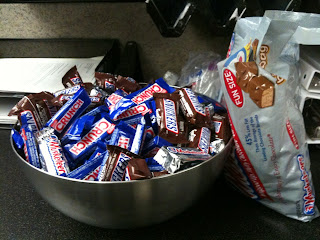 So here's what kind of sums up the weekend: Saturday evening, after Georgia's soul-crushing loss in the Cocktail Party, I head out with Spencer Hall -- who, it should be said, was incredibly gracious and understanding about the loss despite being a Gator fan -- and we go to pick up some booze and other provisions to tuck in for the late shift of games (mainly Oregon-Southern Cal). We're at Kroger, and I think, "Oh, I'm living in a house now, kids will be coming by for trick-or-treating, I should probably buy some candy."

So I get $15 worth of candy at Kroger -- the good shit not the bullshit, I'm talking Snickers, 3 Musketeers, stuff that will make kids glad they stopped at my house, since secretly I've been fighting a battle to make people younger than me think I'm cool ever since being a social outcast in junior high -- and I come home Sunday afternoon prepared to feed the costumed masses. Whereupon I find out from my friend Karen over Twitter that the city of Columbus moved trick-or-treating to Saturday night. Apparently they were worried that the actual date of Halloween was a school night, but come on, Halloween falls on a school night all the time and I'm pretty sure this was just code for a bunch of Baptist preachers getting their culottes in a twist over Satan's holiday falling on a Sunday.

Whatever. So I ended up with three gigantic bags of candy I took to work with me this morning and now everyone in Marketing is going to gain 10 pounds this week. Man, fuck football and Halloween. It's been that kind of luck lately.

· No change whatsoever in the top 10 until you get around to brutally punishing Michigan State and Mizzou for embarrassing themselves and shaming their top-10 rankings on national TV. Biggest beneficiary of the carnage: Iowa, back on the doorstep of the top 10 after administering several UFIAs to the Spartans, who probably should've seen it coming and at least done a little better job of preparing for it. Down 30-0 at halftime? This is what we call "not knowing how to deal with success."

· And honestly, that's about all the news there is to report on the BlogPoll front. Nevada regained some ground after carpet-bombing another opponent with touchdowns, Florida State plummeted after a loss to N.C. State that, in hindsight, was more predictable than a CBS sitcom plot. Almost all the other movement can be traced directly to teams taking advantage of Missouri's/MSU's fall from grace. 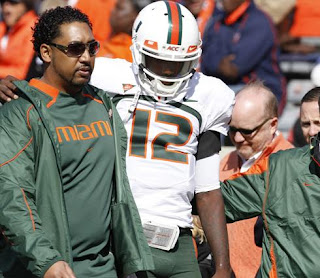 · Miami and Michigan are gone entirely after embarrassing losses that nevertheless laid bare weaknesses that have been periodically peeking their heads above the surface for weeks now; they're replaced by Florida, who actually seemed to figure some shit out on offense this past week (against Georgia, of course), and the return of N.C. State, who if recent trends in the ACC are any indication is a mortal lock to get punked at Clemson this weekend.

1. Auburn -- C'mon, y'all didn't seriously think Ole Miss was an upset risk for them, did you?

2. Alabama -- After the off week, we get to find out conclusively whether their offense has worked the kinks out when they travel to Baton Rouge.

3. Arkansas -- Not that any of them confused Vanderbilt's secondary with an elite unit, but it had to be nice to see Ryan Mallett return to form (409 yards, three TDs, no picks).

4. LSU -- I know we're two-thirds of the way through the season, but I still wonder just how good LSU's defense really is. None of their first seven opponents could exactly be called high-octane offenses, and opponent #8, Auburn, pretty well shredded them (526 yards, including an amazing 440 rushing) even if it wasn't readily apparent on the scoreboard. 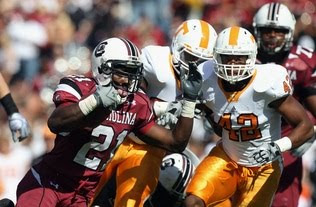 5. South Carolina -- The Gamecocks are in sole possession of first place in the SEC East, and yet it still seems like they could just as easily go 0-4 as 4-0 over the final month of the regular season.

6. Florida -- Whether it was Rainey's return, Meyer's vaunted bye-week tinkering or just the fact that they were going up against the Dawgs, the struggling Gator offense came within a stone's throw of setting a new single-game high in yardage for the season.

7. Mississippi State -- Dan Mullen still doesn't have the offense he'd like to have in Starkville, but defensive coordinator Manny Diaz is doing a damn good job of keeping things under control for the Bizarro Bulldogs until he does.

8. Georgia -- C'mon, y'all didn't seriously think Georgia was gonna pull off a win over the Gators in this of all seasons, did you? (OK, I did. God help me, but I did.)

9. Ole Miss -- If nothing else, Houston Nutt's somewhat craven grab for Jeremiah Masoli has started making a lot of sense. Just imagine how bad the Rebels would be right now without him. 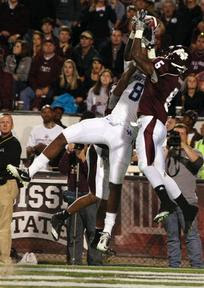 10. Kentucky -- If Marcus Lattimore doesn't leave the Kentucky-South Carolina game just a few snaps into the second half, the Wildcats are probably riding a six-game skid right about now.

11. Vanderbilt -- Vandy had 36 total passing yards in the entire game this past weekend. Ryan Mallett threw two separate passes that went longer than that.

12. Tennessee -- Another not-so-fun fact: In the first halves of its eight games this season, the Vols have outscored their opponents by a total of 93 to 84 -- yet they're 2-6. You tell me what the problem is.
Posted by Astronaut Mike Dexter at 6:54 PM

What's the mystery here? It's as clear-cut a depth issue as you'll ever see.

That is totally a depth issue...which actually bodes well for them in the future. It means Dooley may know a thing or two about coaching.

On another note. MSU behind UF?