Poll dancing, week 13: A fun weekend, and nobody died (despite their best efforts).

Well, we did Thanksgiving dinner, we did the Egg Bowl in Oxford, we came, we saw, we drank a lot, we saw some unbelievably gorgeous women . . . and oh, yeah, in the midst of all that we watched a little football. The writeup on the Egg Bowl weekend (and the Georgia game, what little I saw of it) is coming, but in the meantime . . .

Games watched: Parts of Texas A&M-Texas, Auburn-Alabama, parts of Oregon-Arizona, the first (and by far less interesting) half of Nevada-Boise State, Mississippi State-Ole Miss, the tail end of Oklahoma-Oklahoma State.

· The action in the top 10 is set in motion by Boise State, LSU, and Alabama all suffering losses of fair degrees of stunning-ness over Thanksgiving weekend. None of them got blown out, but by the end of it none of them quite looked like national-championship material, either. 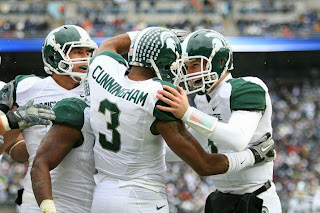 · I realize I've got Wisconsin as the top Big Ten team in these rankings, but here's a question: Michigan State beat Wisconsin; Wisconsin beat Ohio State; Ohio State hasn't beaten either of the other two (since they didn't play MSU). So how come Wisconsin is getting all the Rose Bowl love and Sparty has kind of turned into the odd man out in this little three-way?

· Probably dinged Oklahoma State too much for coming out on the wrong end of a wild shootout in Stillwater last week, but who do I put them above? Not Oklahoma or Nebraska, obviously.

· Arizona and North Carolina State get ushered out, with Maryland and Northern Illinois taking their place, and yes, I've watched NIU play this season. With a mobile QB and an offense that can score bushel baskets of points in the blink of an eye, they're almost like a poor man's Oregon, and they're gonna rip somebody a new one in a bowl game that precisely no one will watch.

On to the SEC Power Poll ballot:

1. Auburn -- Not sure whether to be amazed that they bounced back from a 24-0 deficit or puzzled at how they ended up in said deficit to begin with. All I'll say is this: Oregon doesn't strike me as the kind of team that'll take their foot off the gas the way Alabama seemed to in the second half. 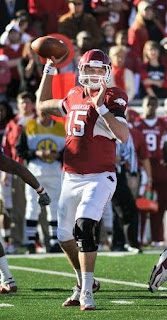 2. Arkansas -- All reports seem to indicate that Ryan Mallett will get one more chance to impress the NFL scouts in the Sugar Bowl, and you can't say he hasn't earned it.

3. LSU -- Fitting that LSU would get effectively knocked out of a BCS bowl by a loss in which they were out-Miles'd. Guess we now know their good luck has a ceiling.

4. South Carolina -- If they can play ball control offense and get a couple late stops against the Tigers, they've got a chance to win in the Georgia Dome this weekend. But I'm still putting my money on Auburn, and I don't really care what the spread is.

5. Alabama -- Hard to pinpoint just exactly where they went wrong this year, but the running game sure underwhelmed down the stretch considering that it had a Heisman Trophy winner and a guy everyone said was better than him.

6. Mississippi State -- The flipside to an eight- (or perhaps nine-) win season in Starkville: Now they have to cross their fingers for the next two months and hope nobody poaches Dan Mullen.

7. Florida -- I'm loath to call the Urban Meyer dynasty over after one crappy season, but with the Gators having emphatically ceded in-state superiority back to FSU, a Gator Bowl berth on the horizon, and Steve Addazio appearing to be completely secure in Gainesville, you gotta hear the clock ticking. 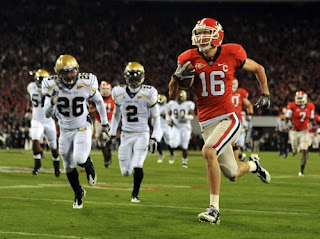 9. Tennessee -- The season played out just exactly like everyone said it would, and now Derek Dooley has a chance to finish with the same record Lane Kiffin did in his lone season in Knoxville. (Kiffin: "All part of my master plan.")

10. Kentucky -- Earning a fifth straight bowl bid is nice, but other than the upset over South Carolina, there's not a lot you can point to as an indication that Joker Phillips is headed for breakout success in Lexington.

11. Ole Miss -- I watched the Rebels take a pretty good stab at making a stunning comeback against Missy State the other night in Oxford -- right up until the final drive, when Jeremiah Masoli had to lead the Rebs to the tying touchdown. The final two minutes were like a Benny Hill episode, and I'm now inclined to agree with those who think Houston Nutt is perhaps the most accomplished QB-killer in the country.

12. Vanderbilt -- Debated whether to put Vandy or Ole Miss in the bottom slot, but these stats ended that debate. As much as I like Robbie Caldwell's story, you can't exactly blame the Vandy administration for not having any interest in keeping him on.
Posted by Astronaut Mike Dexter at 7:53 PM

Also, both Wisconsin and OSU went into Iowa City and beat Iowa, while MSU lost there by 31 points.

It's not a perfect tiebreaker, but in this situation, I think they got it right.

It's also because MSU did it with smoke and mirrors all season. They were basically last year's Iowa team and got unbelievably lucky. Especially against Northwestern and Notre Dame.