Poll dancing, week 10: No Legos for me, and no soup for you. 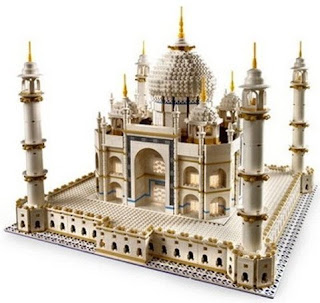 So Sunday Holly and I went up to the Lego store in Lawrenceville, where I was going to pull the trigger -- after probably three years of pining, I was going to sack up and plunk down an obscene sum of money for the Lego Taj Mahal. We get to the counter, dude swipes my card, and . . . rejected. The problem: Wachovia switched over to Wells Fargo this past weekend, and they haven't sent me my new card yet. (Nice of them to cancel my old card on me before I was all squared away, though.)

Not everybody can know what that feels like -- you totally think something awesome is right on the verge of happening, but then it totally doesn't -- but I bet Utah, Alabama, and Oklahoma all do. I feel for you guys. But I'm going to make fun of you anyway.

· Getting big bumps in the top 10: LSU, of course, for being only the fourth team in the last three seasons to vanquish the Nicktator, and Stanford for pasting a very good Arkansas team. Lemme pause to give Stanford a major plug here -- their sole loss is to an Oregon team everyone pretty much agrees is unstoppable (and in spite of losing 52-31, they still kept the Ducks slightly below their season scoring average). Otherwise, only one team has finished within single digits of the Cardinal on the scoreboard. If that's not a worthy Rose Bowl team, then I don't think there is one this year.

· Other big risers: Oklahoma State, first of all, for dismantling a Baylor team that had risen up to the ranks of the pretty darn good; Nevada, for coming within a few broken tackles of putting up a half-mile's worth of offense on Saturday; and Florida, who seems to have figured out their offense, or at least substantial parts of it, over the last few weeks. Yes, they're above Mississippi State (both here and on my SEC Power Poll ballot, of course), because I don't think they're the same team that mustered all of seven points against the Bulldogs in the Swamp a few weeks back. 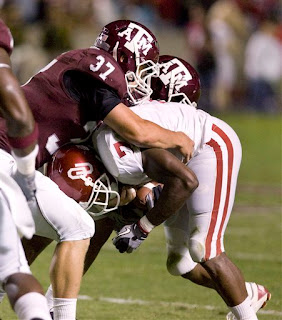 · I always hesitate to drop a team by as much as I dropped Oklahoma this week, but they've lost two of their last three, with the win being a perfunctory ass-kicking of a Colorado team I think we can all agree is hopeless. Saturday's loss, on the other hand, was to a Texas A&M team that they've beaten by a total margin of 173-52 over the last three years, and their so-called "signature win" against FSU ain't lookin' so impressive these days, either. I expect they'll eventually climb out of fourth place in the Big 12 South, but that's not the kind of sentence you should be writing about a top-25 team.

· Utah and Arizona also take it in the shorts for losing by bigger margins even than their biggest detractors would've predicted this past week. Probably should've dinged Mizzou more for losing to a mediocre Texas Tech team, but they still have to be above Oklahoma, for obvious reasons.

· Yeah, Iowa drops four slots for having to work entirely too hard to beat Indiana. Starting to think the previous week's shellacking of Michigan State had more to do with State being spent after a hard-fought comeback win than Iowa being particularly elite this year. 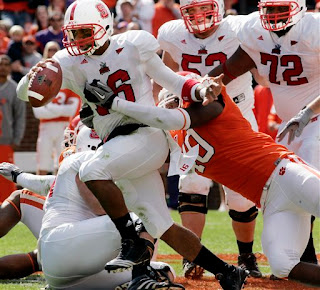 · A pair of ACC sub-entities get flushed from the system, replaced by a pair of middling Big 12 squads who won actual games of consequence. As a league, though, the ACC is still doing way better than the Big East, none of whose teams even sniffed "throwing you in there for reference while I'm putting together the ballot" status.

And the SEC Power Poll Ballot:

1. Auburn -- Boy, Nick Saban's total dominance in the state of Alabama sure doesn't look like it's gonna last nearly as long as we all thought, does it?

2. LSU -- There comes a point when the line between insanity and shrewd genius becomes so blurred as to be irrelevant, and I think Les Miles crossed it against Alabama. Actually, he probably crossed it weeks ago, but whatever the case, 8-1 is 8-1, and anybody who's pooh-poohing the Tigers' cred for an at-large BCS berth is just doing so to be bitchy at this point.

3. Alabama -- Remember when we all thought the Heisman voters' biggest dilemma would be which member of the Bama backfield they'd give the trophy to? What the hell happened to that?

4. Arkansas -- If they're pissed to be basically out of the SEC West race, they're doing an awfully good job of making sure nobody else gets to enjoy themselves, either. 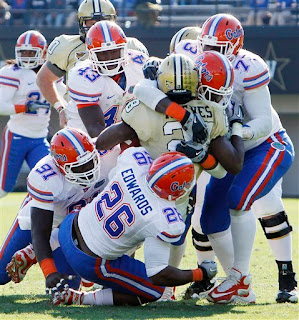 5. Florida -- Well, I hope everybody had a lot of fun picturing South Carolina in the SEC title game, because it doesn't look like there's going to be a lot of point to that after Saturday.

6. Mississippi State -- Still very much in the running for a 10-win season, which even the staunchest members of the "Dan Mullen is really gonna get this thing turned around in a hurry" fan club couldn't have predicted.

7. South Carolina -- Saturday night they looked like a team that could just as easily go 0-3 over the final weeks of the season as 4-0, and that's why they're down in the bottom half of my ballot.

9. Ole Miss -- Another team that could just as easily go undefeated as winless over their final three games, though that's more a product of Houston Nutt's weirdness than anything else. 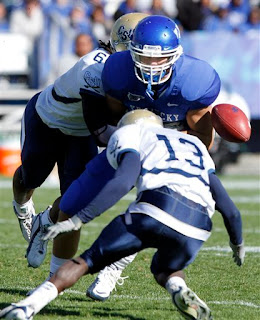 10. Kentucky -- As powerful as we all believe the SEC to be, does a team that finishes 2-6 in the conference really deserve to go to a bowl game? 'Cause I wouldn't be surprised if that describes the Wildcats at the end of the season.

11. Tennessee -- The whole "2-6 start with a 4-0 finish" sounded perfectly plausible in the preseason, and even that started looking pretty shaky a few weeks ago -- but now the needle seems to be headed back toward "plausible" again.

Errr, not trying to be hypercritical, but I think you meant that Stanford pasted a very good Arizona team.

And all I can say about the purchase fail on the Lego Taj Mahal is "O Noes"!