Poll dancing, week 11: My pride is listed as "questionable" this week.

Sorry, I would've had this post up earlier, but Nick Fairley threw my computer on the ground right after I shut it off Sunday evening, and then Cam Newton threw it out a window. It's been a tough weekend for the ol' Dell.

Games watched: Northern Illinois-Toledo, the first half of Boise State-Idaho, parts of Tennessee-Ole Miss, all of Auburn-Georgia, parts of Alabama-Mississippi State.

· As I hinted at yesterday, Oregon retains the top spot despite not having had as impressive a Saturday against a mediocre opponent as Auburn did, and it's because I think the Ducks would have the edge on defense if the two teams played on a neutral field (which they very well might in a couple months). Not that I think the game wouldn't be a shootout just the same, but I see Oregon as being far better equipped to make the decisive stop at a critical juncture in the game than Auburn.

· Honestly, not a whole lot of action elsewhere on the ballot this week, though South Carolina does get a big bump for crushing Florida a) in the Swamp and b) at a point in their season where they've typically forgotten how to win in the past. And I count myself among the people who didn't think they'd be able to do it last week, but congrats, Gamecocks, you've made fools of us all. (Except Holly, who had this pegged way back in July.) 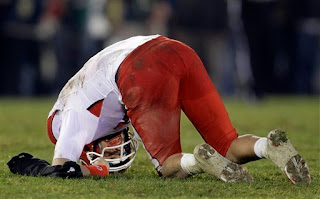 · Arizona and Utah take the biggest hits this week, and while Arizona's drop might be too steep for a team that managed to hang close with USC, there's no way Utah deserves to still be considered a top 25 team after getting hammered like that at Notre Dame. Unless you think a five-point road win over Air Force is a "signature victory" worth crowing about.

· Replacing the Utes, Gators and Wildcats in the balloting: USC, North Carolina State and Florida State. USC has looked a lot better than I thought they would this season (though still not Rose Bowl-caliber), but I wouldn't get too excited if I were one of the other two; they seem to jump into the top 25 every couple weeks just long enough to do something stupid the following weekend and fall right back out again.

1. Auburn -- I've been pretty harsh on Auburn the last couple days, so let me point out something about their team that really impresses me, and something that'd scare the hell out of me if I were Alabama or South Carolina: They deal with adversity better than any team I've seen in a long time. Doesn't matter if they get down by a score or two, they dial up a big play and come storming back. Particularly for a team that was dealing with as much distraction as they were last week, that's pretty formidable.

2. LSU -- I've seen a few people already penciling the Tigers in for an at-large BCS berth, but I'd imagine Bobby Petrino is gonna have a thing or two to say about that. 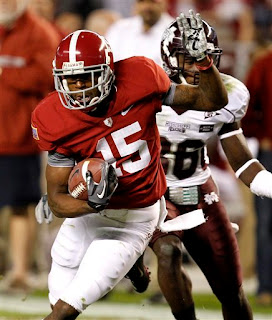 3. Alabama -- Has the Iron Bowl lost a bit of its luster now that Bama is out of the national-title picture? Not when the Tide still has an opportunity to tell the Tigers "We run this state" -- and stomp on the throat of their championship hopes in the process.

4. Arkansas -- For their sake I hope they're smart enough not to overlook Mississippi State this weekend.

5. South Carolina -- Florida may be a struggling team this year, but I don't think that should take away from what the Gamecocks accomplished by beating them. The Gators appeared to have their offense back on track, the game was in the Swamp, and it was at a time of year when past Carolina teams have folded like origami swans. But lo and behold, we're having to wrap our brains around the idea of South Carolina in the SEC title game.

6. Mississippi State -- I think the loss in Tuscaloosa says more about how we were all too quick to forget about Alabama than about State not being as good as they were getting credit for. 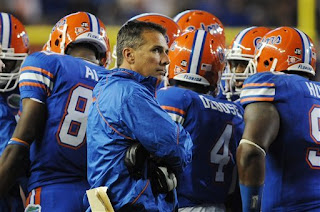 7. Florida -- I don't know if the Gators could conceivably lose to Appalachian State this weekend, but I do know it'd be hilarious. [/boldprediction]

8. Georgia -- One of these days they'll figure out how to neutralize a mobile QB, but it looks like that day might not be until next season.

9. Tennessee -- The Vols scored a total of 48 points in back-to-back-to-back losses to Georgia, Alabama, and South Carolina. Then they turned right around and topped that number in both of their next two games. If that's what you get from switching to Tyler Bray at QB, then it looks like a pretty good switch.

10. Kentucky -- I'm not telling you anything you don't know, Wildcats, but now's a bad time to be facing Tennessee if you're hoping to break that quarter-century losing streak against them.

11. Vanderbilt -- In a season where very little in the SEC has looked the way we expected it to, the Commodores have been refreshingly familiar. 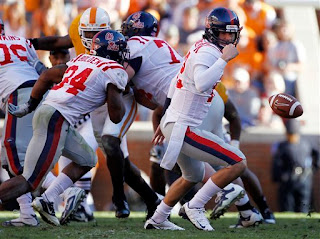 12. Ole Miss -- As Holly reminded me several times this weekend, Tennessee barely has enough healthy DBs left to put a nickel package on the field -- yet they still bitchmade Jeremiah Masoli like he was a high-schooler. I'd be pretty stunned to see the Rebels win either of their remaining games.
Posted by Astronaut Mike Dexter at 8:40 PM