You know where you went wrong. 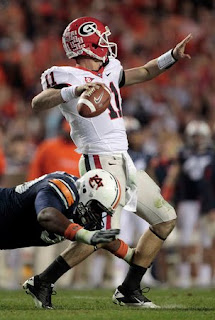 You all know me as someone who never likes to appear too confident about the Dawgs before any given game; I get jacked, sometimes bare-assed flag-wavingly so, about wins, but during the course of an average week I'm probably a lot closer to Depressive Doug from the Manic-Depressive Previews than his counterpart. So when I looked Holly square in the eye Saturday morning before we packed up for Auburn and said "We're gonna win," that was a big step for me. Between Georgia historically playing well on Auburn's home field even when the Tigers are astronomically ranked, Auburn's shittastic defense, the Dawgs having shrugged off their early-season losing streak, the potential for distraction on Auburn's side and, fuck it, Auburn just being due for a loss, I really thought we had a chance.

And I was right -- for a quarter, at least. No, check that: I was right for a lot longer than that. The commentator on ESPN Radio the next morning said Auburn "dominated" as he was rattling off the weekend's scores, but I didn't see anyone get dominated in Jordan-Hare. "Dominating" teams don't fall behind 21-7 or lead by only four going into the final quarter. The Dawgs hung in there better than you or I or probably most of the people in the stadium thought they would, and I tip my cap to 'em.

But as confident as I was (or tried to appear) before the game, I wouldn't be telling the truth if I said that confidence remained consistent for the full 60 minutes. It started waning around the end of the second quarter, at which point Auburn had erased their two-touchdown deficit and appeared to have wrestled momentum back from the Dawgs -- and Georgia, despite about a minute on the clock, one time-out and a clicking passing game, declined any attempt at answering back. (Which reminds me, we did the same thing against Kentucky and ended up going into the locker room with all three time-outs still languishing on the board.) Even as the bands played at halftime, I found myself thinking, "You know, these are just the kinds of circumstances under which we're prone to just completely fucking things up." 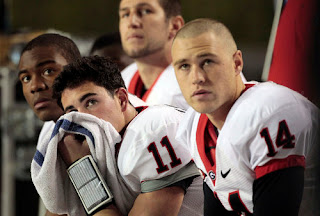 "Yup, this is where things start going pear-shaped. Got it."

And then Auburn hit a beaut of an on-side kick to start the second half, they charged down the field for a TD on the ensuing drive, and my prediction started coming true. Well, not really: We didn't "fuck things up" in a visibly disastrous way, but it became clear that Auburn had found another gear and shrugged off earlier frustrations to hit a level of intensity that just weren't quite able to match.

I guess you can't get too mad about that, given that Auburn is the #2 team in the country and armed with the nation's best player, who, for obvious reasons, had to have been playing the second half pissed. But it does get back to a complaint of mine that's been lingering around this team for three years now: We deal with success worse than anyone in the SEC, perhaps the country. For the most part, we deal with adversity just fine -- look at how we bounced back in the second half of the Cocktail Party -- but God forbid we ever build up a big lead against a good team, we'll immediately start hunting for ways to piss it away. Hit a big play for a score, give up a huge return on the ensuing kickoff. Mount a nice drive down the field, drop a crucial third-down pass or just fumble the ball away entirely. So it goes. I'm sure it says something unpleasant about the state of our program that we're this unaccustomed to good things happening, but that's where we're at. 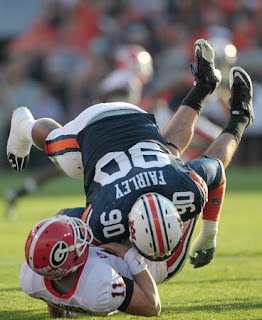 You will be shocked, shocked, to learn that Murray doesn't have the ball in this picture.

Don't know how much more there is to say about it, other than congrats, Nick Fairley, you did what many thought was impossible and wrested the title of Dirtiest Player in the Country away from your teammate Ryan Pugh. I wonder if I'm the only one who noticed that Auburn's defense only started getting consistent stops when Fairley dropped any pretense of not trying to put Aaron Murray in the hospital? Good luck trying that in Sanford next year, kiddo. And whether it's because of the NCAA or the NFL, I doubt you'll have Cam Newton on hand to cover up for the rest of your defense sucking.

Sorry, how unsportsmanlike of me. I shall do the honorable thing and eject myself from this blog.

But not before a few passing thoughts:

· Both Oregon and Auburn were tested Saturday, and while Auburn shrugged off that test more easily than the Ducks did, I'm inclined to keep Oregon as the #1 on my initial BlogPoll ballot tomorrow, for one simple reason: If Oregon and Auburn end up in the national title game, I've got a lot more confidence in the Ducks' defense being able to come up with a critical stop against the Tigers than in the Tigers' ability to do so against the Ducks.

· Of all the coaches in Division I-A, I never dreamed Bret Bielema would be the one I'd be criticizing for being too big a pussy to go for 90. 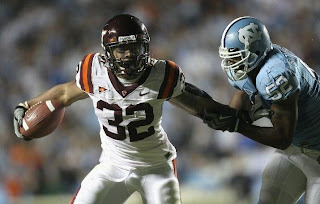 Leaving aside for a moment any jokes about the best team in the ACC being sorta like the prettiest girl in the insane asylum . . .

· I don't know if y'all have been following Virginia Tech at all or if you gave them up for dead after they lost to James Madison, but they've now broken off eight wins in a row and appear destined for another ACC title. So is it too early to write off the JMU loss as the product of an embarrassing hangover following a heartbreaker of a loss to Boise State -- the undefeated team that all the TV pundits seem to want in the national-title game?

· UAB Blazers Watch: Wow, you talk about not being able to handle success. UAB scored a TD with 9:41 left in the game to go up 42-34 on East Carolina, and here's how the rest of the quarter went: ECU drives down the field to score a TD and come within two; UAB three-and-out; ECU returns the punt to the UAB 11, scores three plays later to go up 48-42; UAB fumbles the ensuing kickoff, ECU scores four plays later to go up by 12. And, of course, UAB throws an interception at the Pirates' 6 on their last-gasp drive. Thus are the Blazers eliminated from bowl consideration. Fun while it lasted, I guess.

· Wofford Terriers Watch: As if this weekend wasn't soul-crushing enough, the Terriers got shut out in the first half on the way to a 43-13 demolition by Appalachian State. So even if WU beats Chattanooga in their season finale this weekend, they'll lose the tiebreaker to ASU for the Southern Conference championship.

On the other hand, I just realized that Wofford University's initials are WU, as in "-Tang Clan," which is yet more evidence in support of their awesomeness. So they've got that going for them. Which is nice.
Posted by Astronaut Mike Dexter at 6:21 PM

Email ThisBlogThis!Share to TwitterShare to FacebookShare to Pinterest
Labels: football, georgia bulldogs, I hold grudges, times I wish I was dead

Doug, you'll be shocked to notice that Brodie Croyle doesn't have the ball in this picture:
http://www.gettyimages.com/detail/81375865/Sports-Illustrated
I guess you're glad to be rid of the embarrassment that thug brought to your program. Do you really want to play this game?

After Fairley was chop blocked all game ("OMG, it's totally okay to do that against Auburn because Ryan Pugh has done it before!") and got a flag for it only once, and then was the target of one of the most flagrant hits I've ever seen on a college football field (2-3 guys sitting on him, gouging his eyes and kneeing him in the back), you should be thanking your lucky stars that your guys got off scot-free while two Auburn players were ejected for defending their teammate.

Do you really want to be calling opponents dirty after a game where your guys were deliberately trying to incite a brawl?

Yes, yes he does. Since your team played dirty all afternoon. I guess when your best player is allowed to openly cheat the system, it sends a message to the other players that rules are an afterthought. Especially when your head moneylender is on the sidelines high-fiving players after they dive for knees.

And i like how the picture you showed was a guy getting tackled, which is perfectly normal and legal behavior.

Seriously, I haven't seen as much wasted talent since...umm probably 2008

Frank "There not Booing Coach Richt, there chanting MARK!!!!!