Time to think and time to kill. 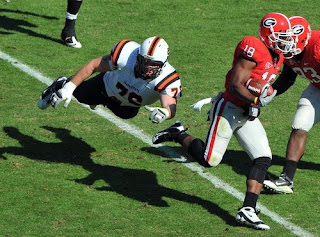 Noticed a whole bunch of kids traipsing around downtown and North Campus yesterday morning as I was heading to the Tent City tailgate, which I suppose tells you everything you need to know about what kind of game this was. Paradoxically, it was the kind of game you'd have to be a real die-hard to give a crap about, yet the real die-hards all dumped their tickets on casual-fan acquaintances who could say, "Hey, great, I can take my kids to a real Georgia gameday and then leave at halftime before they start getting antsy." And leave at halftime they did, for with Georgia carrying a 41-0 lead into the third quarter, the stands already looked as depleted as, well, as I remember Legion Field being for the first quarter of your typical UAB game.

Given that Idaho State is not only a I-AA team but a I-AA team of a significantly lower competitiveness level even than most I-AA teams we've scheduled for executions in recent years, there ain't a whole lot worthwhile to take from Saturday, but I'll entertain you with what snippets I can:

· I'm not excited that we gave up an easy opportunity for a shutout by losing focus and allowing Idaho State a garbage-time TD in the fourth quarter, but I'll excuse it because a) I don't blame any of our players for looking ahead to Auburn and b) the guy who caught the shutout-negating TD was wide receiver Rodrick Rumble. He may be a player on a bad DI-AA team, but he's definitely got a I-A caliber name.

· Nice to see Bruce Figgins out there for the first time in what felt like three years. (Actually, the TD he caught right before halftime was his first in three years, so.) Still, seeing all those names in the box score -- 10 different guys caught passes for us Saturday, including Figgy, Marlon Brown, and Israel Troupe -- kinda made me wonder: Where the hell have those guys been all season? Troupe, in particular, I was really high on in the preseason, yet he's basically disappeared this year. A.J. Green was out for the first month of the season and we didn't try any harder than this to work those guys into the game plan?

· I hate calling out individual players for random dumbassery, but for reals, Vance Cuff is making a strong push for the Bryan Evans Dude Seriously What The Fuck Lifetime Achievement Award. Here's a sequence spanning the third and fourth quarters that kind of sums up #25's Georgia career in a nutshell: Three and a half minutes left in the third quarter, Cuff picks off Idaho State's QB and turns it around for Georgia's final score of the day. Eight and a half minutes of game time later, ISU's first drive of the fourth quarter, Cuff gets aced on a 33-yard pass reception that moves the Bengals into Georgia territory for the first time all day, and then on the very next play gets tagged for a PI call that moves ISU down to the Bulldog 25. Couple plays later, Idaho State passes for a touchdown and ends Georgia's shutout.

Actually, that's a pretty apt metaphor for Georgia football in general the past two or three seasons -- anything good is followed in relatively short order by something embarrassing. Which means that even if we do somehow pull a miracle next week and hand Auburn their first loss of the season, we'll just go out two weeks later and get blown off our own field by Tech. So it goes.

· You could tell Idaho State's offensive coaches were doing everything in their power to make sure their QBs got rid of the ball as soon as possible. The bad news is that plan worked well enough to hold Georgia to only one sack all day long, by Christian Robinson; the good news is that ISU's passers weren't terribly accurate when they were sped up like that, which was reflected in their combined 42.8 QB rating on the afternoon. (Starter Russel Hill, who completed two passes to his team and two to ours, finished with a 1.68.) 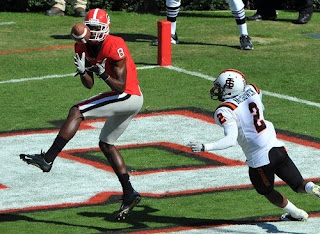 · I can't remember who pointed this out at the tailgate on Saturday -- if it was you, e-mail me and I'll give you full credit -- but in their five wins this season, Georgia's average margin of victory is 35.8 points. Their total margin of defeat in their five losses is 35 points. Now, granted, that stat is skewed somewhat by the fact that our five wins came against some truly horrendous competition -- none of whom is currently blessed with a winning record -- but to be that dominant in wins, and to be close enough even in the losses to average being within a single score every time, just shows to go you how close this team might've been to being something special this year.

· Did it seem like this weekend a) was fairly bereft of truly interesting games and b) kind of felt like the CFB equivalent of Sweeps Week, where all the big contenders (and even quite a few non-contenders) were running up ricockulous scores as if they were trying to impress people? Duke over Virginia, 55-48. Florida and Georgia each hitting the double-nickel against crap opponents. Oklahoma State hitting the double-nickel against a good opponent (Baylor, and when was the last time you were surprised at the Bears getting beaten that badly?). Sixty-four points for Tulsa, 76 for Navy in an opponent's home stadium, forty-seven for TCU in an opponent's home stadium and against a team the pollsters considered top-five at the time. Forty-two points and 737 total yards for Boise State; 63 points and 844 total yards for Nevada.

· And that's even before we get to the bizarre Michigan-Illinois game, which qualified as a shootout long before it went to triple OT. Maize & Blue fans, did you ever think you'd be celebrating a return to bowl eligibility directly following a game in which you gave up 65 points to Ron Zook? 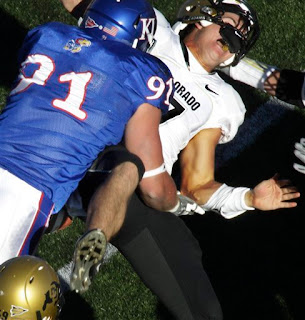 · One more dose of humility for Dawg fans in a season that didn't really need another one -- Colorado led a fairly hapless Kansas team 35-10 at halftime and 45-17 in the fourth quarter, only to give up five TDs in barely 10 minutes of game time in the fourth quarter and lose by a touchdown. But we couldn't muster a fourth-quarter comeback against the Buffs even with A.J. Green on the field. Seriously, God, after all the good works Mark Richt has done in Your name, you'd think You'd treat a brother a little better than that.

· UAB Blazers Watch: Speaking of teams that can't ever do something good without immediately following it with a fuckup, the Blazers lost to Marshall by two TDs at home and now need to run the table against ECU, Memphis and Rice to make it to a bowl. The last two games are eminently winnable, and East Carolina's even winnable if you saw how horrendous their defense was against Navy, but many years of experience tells me UAB's seventh loss is almost assuredly just around the corner. Actually, what'll probably happen is they upset ECU next week and then get punked by Memphis at home the very next Saturday.

· Wofford Terriers Watch: Tweren't pretty, but the Terriers knocked off Samford 10-3 last Saturday to run their winning streak to eight games, and -- with Appalachian State having lost to Georgia Southern in OT the same day -- take sole possession of first place in the Southern Conference. Should Wofford win at App State this weekend, they'll clinch the conference title outright, which may be the one positive thing I get to take out of college football this year.

· And as long as we're talking Terriers, I should mention one last thing about the Georgia game, or more accurately the tailgate, which is to say that Jenna drank like a champion on Saturday -- she was feeling it a little the next morning, but was back up and at 'em by mid-afternoon, and for that she remains an inspiration to us all. 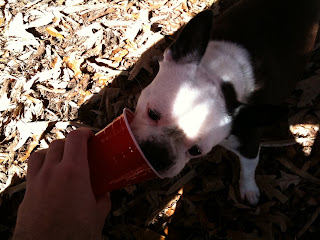 Posted by Astronaut Mike Dexter at 7:48 AM

No, we never thought we'd "celebrate" a return to bowl eligibility in the first place! Let alone the Zooker. That's what was so weird about Saturday. Scraping by in that win felt so good, but there was something dark and depressing about it, too.

It was like good sex with a bad person.

The Blazers lost to Marshall by two TDs at home(coming).

That makes it better.