Keeping up with the Joneses: "College Gameday," Tebow of Nazareth, and the perks of being a wallflower. 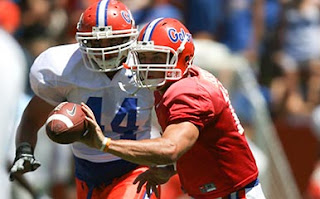 The Blue team defeated the Orange team, 28-14, and if there's anything one can take from the game at face value, I would say that the Gator defense, its biggest Achilles heel from last season, looks somewhat improved, though still not elite just yet. The team's other weakness, its lack of a feature running back, may also be a couple steps closer to being solved, though Chris Rainey, not high-profile transfer Emmanuel Moody, may end up being the key to that solution. And while Tim Tebow will probably be his usual worldbeating self (13-21 for 200 yards and a pair of TDs), he may have to do it without much help from his receivers. There were enough passes that hit receivers right in the hands and got dropped anyway that I sometimes wondered if a few of them hadn't been hitting the same Alice-in-Wonderland "Drink Me" bottle from which Georgia's receivers apparently were swigging liberally before the 2006 season. (Percy Harvin, it should be said, was out with an injury.)

But the most important guys at Florida Field in the context of the season, as opposed to this particular game, were not Chris Rainey or Urban Meyer or even the Great and Powerful Tebow: They were Chris Fowler, Kirk Herbstreit, and Lee Corso, the "Gameday" guys. Their mere presence ratcheted up the hype surrounding the 2008 Gators to fever-pitch levels, and their comments may have taken it a few levels beyond that. Herbstreit said several times that Florida was the team most likely to win the SEC title, given Georgia's schedule (which he called the toughest in the nation) and the ongoing Ryan Perrilloux Schiz-O-Palooza at LSU. Lee Corso seems to think that, by season's end, South Carolina and Florida will be the ones squaring off for the SEC East title. (Of course, given how wild his pitches are on an actual football Saturday, only the truly foolhardy would take one of his April predictions without multiple grains of salt, if not an entire salt mine.) And in a sound bite destined to be chuckled at across the Southeast for the remainder of 2008, Fowler regaled us with tales of Tebow's healing powers in the Philippines over Spring Break. Nope, Blutarsky didn't make that up, I heard him say it, too.

Now, we all know a) how much ESPN loves them a narrative and b) how they'll cling to it like grim death, barring some major, humiliating collapse. If the "Gameday" coverage of the Orange and Blue Debut is any indication, that narrative is likely to include both Florida as a top national-title contender and Tebow as a candidate to become only the second multiple-Heisman winner in football history. (Not to mention a candidate to become the first NCAA player to heal lepers with the mere laying-on of hands.) Hype frequently being a zero-sum game, these narratives are likely to come at the expense of Georgia's national-title aspirations, and secondarily, perhaps any Heisman buzz for either Matt Stafford or Knowshon Moreno.

You might think that, as a Bulldog, I'd be pissed about that, but you know what? I was loving it Saturday. I'm more than happy to let some other team carry the burden of preseason hype. And as much as we Bulldogs bitch and moan about never getting any love from ESPN or the rest of the mainstream media, most of us would be happy to fly under the radar (as much as that's possible for any team that's already snagged #1 rankings in a couple people's early-early preseason 2008 rankings) while the more robustly hyped teams above us get picked off. Particularly if one of them is Florida.

Perhaps more so than in any other conference, the hype and grueling level of competition in the SEC have created a situation in recent years where at least one team each season collapses miserably after being touted to the ends of the earth. In 2003, of course, it was Auburn, ranked #1 by The Sporting News and #6 in the first poll but suckerpunched the moment they actually took the field and ultimately finishing 8-5. In 2005, it was Tennessee, whose implosion from a #3 ranking and Rose Bowl hype to a 5-6 finish merited an entire book being written about it. Even Georgia has known the feeling under Mark Richt -- not that a 10-2 record in 2004 counts as a collapse, exactly, but I think most of us certainly expected a team carrying a #3 preseason ranking and backloaded with senior talent to do better than an Outback Bowl bid.

The Tennessee '05 example is particularly useful here because, if Darren Epps's book is accurate, that massive preseason hype was in large part responsible for a level of distraction and an overall lack of discipline -- on the part of both the payers and their coaches -- that led the Vols to their bowl-less doom. We see that kind of attitude -- the "look-ahead" -- cause problems in individual games all the time, but as that Tennessee team demonstrated, teams occasionally will apply the look-ahead to an antire season. With the results, of course, being all the more disastrous.

Certainly the expectations surrounding the Dawgs in 2008 are going to be at least that high. And I certainly think Georgia's got the kind of talent and coaching that deserve top-five (if not top-three, or top-one) preseason rankings. But I'd much rather have that kind of ranking in the postseason. So if someone besides Georgia gets tagged with that burden this summer, if someone else gets put at risk for a Tennessee-style look-ahead, I'm perfectly happy to step aside and make way for them -- even if it means a few more months of having to roll my eyes and make the jerk-off gesture through additional stories of Tebow's Christlike greatness.

My ideal situation for 2008 -- and if you're smart, Bulldog Nation, it'll be yours too -- is for ESPN's Gator hype to take hold to the point where Florida ends up as #1 or #2 in the preseason polls while the Dawgs get "bumped down" (relatively speaking) to #4 or #5. That way Georgia's still high enough to be in position for an MNC shot if they take care of their own business, but the heaviest hype burden is borne by someone else, and the Dawgs get the added motivation of "disrespect" -- however minor -- to carry a chip on their collective shoulder into the Florida game, and possibly several others.

So that's my advice, Dawgs. Don't complain about the Gator hype this summer; embrace it. As much fun as it might be to be sitting on top of the heap on August 30, it'd be a million times better to hold that spot on January 9. Sure, it's early, but it's never too early to know which of those is better; let's just hope our players are aware of the same.

ADDED: Did Erin Andrews dress like a Disney princess on purpose, like as part of some Florida cross-promotion or something? Or was that just an accident? Check Busted Coverage's photos and get back to me on that one. 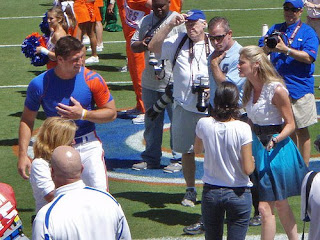 And if she was trying to dress like a Disney character, why couldn't it have been the Little Mermaid? Anybody? Is this thing on? . . .
Posted by Astronaut Mike Dexter at 8:59 AM

doug, you summarized my feelings on this exactly. one of the best things that can happen for uga in the off-season is for the capricious slut of public sentiment to turn against uga. that would be very healthy for our chances in 2008.

I'm not so sure that any team will finish undefeated this year, so starting out as high as possible gives any team the best advantage in the polls.

I hear ya on the expectations - but these guys seem hungry and wanting to prove something to everyone (particularly after the snub last year). CMR can and will learn from mistakes of others and won't let the guys fall as far as UT '05.

It's adorable that you actually seem to believe Florida needs outside help to self-destruct.

LMAO - from now on, every time I make a reference to Lee Corso I am just going to say "Salt Mine". In fairness to Lee, I think he knows he is FOS, but as he intimated once in an interview, they pay him too much for him not to stick to the script.

I would be perfectly happy if College Gameday never came to Athens again. We get enough Smug jerk-offs in the classic city when Tech comes to town...we don't need them imported from Bristol.

From now on I dub Tebow "The Ned Flanders of College Football".

What is this outfit? I would say Tebow is prolly hitting Snow White but I do not think JC would approve of pre marital sex.

Florida 2008 will be marginally better than Florida 2007, who finishsed 9-4 (5-3), good for 3rd in the East and 5th in the SEC. Florida lost to, and finished behind, a fairly crummy Auburn squad.

Marginally better. Not good enough for an SEC East title, even with Georgia's tough schedule.

As a Gator fan and a person with hetero man Love for Tim Tebow, I totally get where you are coming from. The only issue is it doesnt matter this year, the Gators will have a defense this year unlike last year, Knowshon marino will finish Second in the Heisman voting and only run for 55 against the gators. Richt wont do that stupi ass send everyone on the field trick and the Gators go 12 and 1 the only loss being to Somebody we were SUPPOSED to beat easily, because we NEVER go Undefeated. I totally Love your blog dude....