My apologies for being a horribly lazy blogger lately; work, Christmas stuff, holiday guests, blah blah no excuse. I'm not dead, just constantly preoccupied. But not too preoccupied to skip Hey Jenny Slater's annual salute to the Sexy Santa costume, one of the most underrated costumes out there. 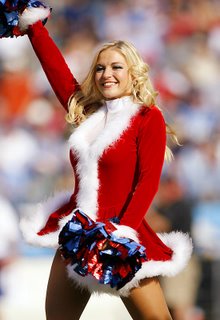 The Tennessee Titans' cheerleading squad knows what time it is . . .

Let's all tip our fuzzy Santa caps and give thanks.

And just in case anyone was wondering what was on my Christmas list: a plasma-screen TV (27"-30" is fine, thx), all eight seasons of "Magnum, P.I." on DVD, a new catalytic converter for a 2000 Volkswagen Jetta, a DVD of the original "Fletch," and a Bentley Continental GT.

Fine, if you want to be cheap with that last one, you can get me the 1/18 scale version instead of the 1/1.

Feel free to throw your own Random Tens, Christmas lists, travel horror stories, suggestions for the Alabama coaching search, and anything else in the comments. (Oh, and loathsome college-football personalities -- still taking nominations until the 30th.)

Merry Christmas, suckers!
Posted by Astronaut Mike Dexter at 8:49 AM

1) Fletch - funniest movie ever? I think so.

I agree with pb at bon; "Fletch" is just about the funniest movie ever. Actually, before Zach Braff was going to make it there was talk Kevin Smith remaking it with Jason Lee as the titular character. The fun stuff you know when you have a non-existent life. To the random ten: