Where have you gone, Coach Cut? A nation turns its lonely eyes to you.

Alabama's coaching search may be reaching increasing heights (or depths) of hilarity, but lost in the hubbub is the fact that their little sister up I-20/59 is also looking for a new coach: UAB head football coach Watson Brown is relinquishing his position and considering a move to the post of athletic director, while offensive coordinator Pat Sullivan, the man who was the top candidate to replace Brown, has decided to take the head-coaching position at Samford instead.

I'm kind of split on this development. On the one hand, it's not exactly something you want to be puffing your chest out about when your own OC passes on the chance to take a promotion to the top job so that he can bump himself down to D-IAA. But on the other hand, if UAB thought the team underachieved this season (hint: they did), then Sullivan isn't that much less culpable than Brown is, so if you really want to make a change, perhaps it's best to start with a clean slate and not just bring someone up from the previous regime.

I, for one, welcome the opportunity to expand the coaching search outside our own walls. I read a rumor that the Blazers were pursuing Rick Neuheisel for the head coaching job (link courtesy EDSBS), which of course sent me into paroxysms of glee, but honestly there's another guy out there whom I think is even better suited for this job, and his hiring at UAB would make everything right with the world on a number of levels. UAB, if you don't at least offer the job to this guy, I don't care that you sign my paychecks, I'm putting you on my On Notice board. 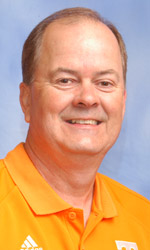 Let's get this poor guy out of that nasty orange, stat.

David Cutcliffe. David Cutcliffe, who masterminded Tennessee's only-stoppable-by-Florida offense throughout the Vols' Peyton Manning/Tee Martin steak years of the mid-to-late '90s. David Cutcliffe, whose departure from said team almost instantly plunged it into a quivering cesspool of lax discipline and quarterback douchebaggery. David Cutcliffe, who led Ole Miss to probably its most consistent success since the John Vaught era, and whose subsequent knee-jerk firing was a display of administrative ass-wittedness so stunning in its hubris that it made Alabama look like a bastion of sanity and thoughtful consideration. David Cutcliffe, whose return to Tennessee this year almost singlehandedly turned the Vols from a 5-6 basket case back into an at least somewhat offensively competent, New-Year's-Day-bowl-bound SEC competitor.

Considering that Cutcliffe didn't even want to give up the Ole Miss job in the first place, you've got to think that the desire to be a head coach at some level still burns in his heart. And where better to do that than Birmingham, Alabama, his hometown, where he got his coaching start at Banks High School? Like Watson Brown, Cutcliffe has a connection to Bear Bryant (Brown was offered a scholarship by Bryant back in the '60s, and while he elected to go to Vanderbilt instead, he and the Bryant family supposedly remained close; Cutcliffe actually attended Bama and served as a student assistant under the Bear). And perhaps most importantly, he has a reputation for discipline that the Blazers quite frankly could really use right now. The last two seasons have seen the Blazers kill potentially promising campaigns with mental errors and stupid-ass penalties; as my friend Darren (who covers UT sports for a paper in Tennessee) mentioned earlier this season, Cutcliffe's return to Knoxville helped inspire greater discipline, greater effort, and better decisions from the UT players. There is a pretty good talent base at UAB right now, including a young quarterback, Joseph Webb, who's already done some exciting things even in limited action over the last few games of the season. With a guy like Cutcliffe there to develop him like he developed, say, Peyton Manning and Tee Martin (and got Erik Ainge's head screwed on straight, incidentally), who knows what UAB could accomplish?

Plus, I can't overstate how big a punch to the gut it would be to Tennessee if they were to lose him. Not that that's first and foremost on my mind or anything.

The biggest worry right now is that Alabama might try to snake him first, but oddly enough I haven't heard him mentioned even once in the Bama conversation, what with the Tide too busy tilting at ridiculous windmills like Steve Spurrier and Nick Saban, and even as an Alabama grad, Cutcliffe might be loath to ditch Tennessee for their biggest rival. So it's time to strike while the iron is hot, UAB. At least give this guy an interview; then give him an offer. This is the guy who could help the Blazers take a big step forward in a C-USA that's pretty much ripe for the picking at this point, and he's not even some unattainable, pie-in-the-sky candidate. Get after him! Make me proud!

And if he says no, go ahead and get after Rick Neuheisel. 'Cause that would be kinda awesome, too.
Posted by Astronaut Mike Dexter at 10:11 AM

UAB has an uphill climb to get Cutcliffe:

The assistant, who is noted for producing prolific offenses, added that he's impressed with State's facilities and likes the Wolfpack program's potential for success."

Sigh. Well, whatever gets him out of Knoxville.

On to Slick Rick!

The next coach at UAB will be Rush Propst. And there will be great enjoyment for all.

Your love of Rick Neuheisel is one of the most bizzare, yet fascinating (and somewhat endearing) things I've ever seen.

I supported Cutcliffe at Bama, of only for the Cutty Sark drink specials.