OK, so the government decided not to explore my proposal to give Zacarias Moussaoui a sex change, Georgia hasn't called Rick Neuheisel up to offer him a job as offensive coordinator, and I have yet to see Joe Tereshinski III line up at tight end for the Dawgs. Not exactly batting 1.000 on my previous modest proposals, but I think Modest Proposal IV: A New Hope is gonna be a winner. It concerns the University of Alabama and their coaching search, which doesn't exactly appear to be going gangbusters at the moment.

Rich Rodriguez and Steve Spurrier have both said no. Nick Saban is saying no, but Alabama continues to pursue, like a drunk frat guy desperate for some tail. Everybody has suggested somebody, with varying degrees of seriousness -- Todd at RollBamaRoll.com is interested in Tulsa's Steve Kragthorpe; Newspaper Hack, even as he wiped tears from RichRod's rejection letter, put forth Navy's Paul Johnson as a possibility; The M Zone said they should just dig Bear Bryant up; Mayor Kyle King, not at all surprisingly, thought Kristin Davis of TV's "Sex and the City" would be a good choice; and then there was Todd's other suggestion, Jessica Alba.

I actually think Kyle and Todd are closest to the bullseye, and not just because I think Jessica Alba is hotter than jalapeños flambé. With that in mind, I'd like to make a new suggestion. 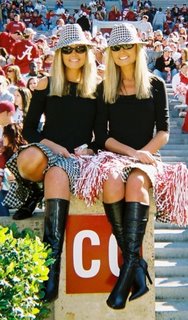 A number of people have asked me, here and at other sites, who these comely young ladies are. Their names are Ashley and Maegen Bailey -- good luck figuring out which one is which -- they're originally from Oneonta, they're each 5'10" (hello), and they have become minor celebrties in these parts for showing up at Alabama football games in the ensemble you see above. So they're kind of like Alabama's version of Jenn Sterger and the FSU cowgirls, only with more houndstooth and (I'm just making an educated guess here) less silicone. I'm proposing their names, collectively, for consideration as Alabama's next head football coach(es).

Straight out of left field? Not necessarily. RollBamaRoll's Chalkdust has said straightaway that Bama may have "evolved past the point of needing a head coach"; if they must have some kind of figurehead, Ashley and Maegen might fill the bill. They're young, they're enthusiastic, they possess the devotion to Bama football heritage that's clearly one of the school's biggest criteria for the job. They'd be a can't-miss prospect on the recruiting trail, as any of my male readers who have ever been 18 years old will attest. I'm not sure whether they have any in-depth knowledge of actual scheme or strategy when it comes to football, but, well, you could ask the same question about Mike Shula, and he somehow managed to win a fricking Cotton Bowl.

But the most important thing in Ashley and Maegen's favor is this: It would be damn near impossible to fire them. Alabama's biggest problem almost ever since the Bear retired has been an almost pathological addiction to coach-firing; they'll dump a coach just for poops and giggles, it sometimes seems, and that has kept the program in a near-constant state of turmoil, with very little continuity or stability at any point in the last quarter-century. But the Houndstooth Twins will be in it for the long haul pretty much by default. If you were Alabama's AD, would you fire them? Could you look the two of them in the eye(s) and tell them the Crimson Tide doesn't have a place for them anymore? Would you want to be the person who goes down in history as the guy who told two adorable blond Bama fans to take a hike? Of course you wouldn't, and neither would anyone else. Sheer softheartedness would keep the Baileys in the front office long enough to at least win an SEC title, one way or another, and get the program back onto some kind of solid footing. 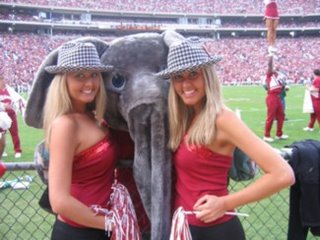 Not only could Alabama do much worse than this, they probably already have.

(Side note: They're both currently students at UAB. So anybody who wants to make fun of my employer is cordially invited to suck it.)

There it is, Alabama. I've tried to help you every way I know how. I'm pointing you toward the Houndstooth Twins, and I got nothin' left. If at long last you don't take that advice, I can't help you.

Anyway, that's all I have on that subject. The Ten:

Your own Random Tens and coaching suggestions in the comments. ¡Apocalypto!
Posted by Astronaut Mike Dexter at 10:22 PM

No further suggestions needed on the coaching front, I'm sold. And pardon me for sounding like the old fart I am, but they are all the more charming because they don't think that this makes them famous or important. Are you paying attention, Wilson Sterger?

Why is no one mentioning Frank Solich for this job? He runs the option, and Ohio can run it down your throat. Air Force proved the option an almost beat Tennessee, and Bama (presumably) has better athletes than a service academy. Get your head out of your butt, Mal Moore, and look north.

All Div 1 schools should follow suit as well..... FSU can be coached by that quirky girl from "Curb Your Enthusiasm", Georgia's new offensive coordinators could be the Olsen twins, and Miami has to look no further that Jennifer Lopez to fill their needs. Maybe Rosie O'Donnell can go to Tennesee, she and Fulmer actually bear quite a resemblance. Imagine how much more fun the press conferences would be!!

The Tide elephant looks suspiciously limp in that picture.

Those girls couldn't be from Bama. Clearly they still have most of their teeth.

And just in time for our game at Bama next season. This has to happen. It just has to.

Actually as much as I wouldn't have cared in the past, the fact that we're bringing in possibly the biggest OL class in UGA recruiting history, well... call me crazy but I think we might need a guy with a little experience already established in Athens, and not somebody brand new coming in with these guys.

I'll do a random 10 for the first time as well, just a few from whatever happens to be on the ol winamp playlist at the moment:

I believe that the power of hot chicks and Alabama's tradition will equal more wins in the future.

RIght on with the coaching selection. The Bear used to intimidate just by leaing up against the goalpost, just like the picture Brian had at mgoblog. Just imagine what these 2 could do leaning up against both sides of the posts.

Those two pseudo-hiltons would give you something ajax can't wash off.

Do you think Bama would take chance on another TCU coach?