Friday Mystery Meat and Random Ten: Everything must go. 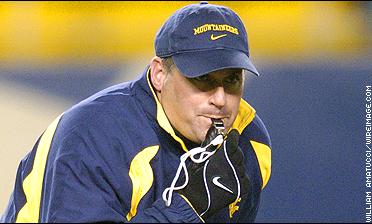 · I never actually thought it would happen -- and in fact I'm sure I made another one of my asinine public-humiliation wagers that it wouldn't -- but West Virginia head coach Rich Rodriguez has accepted Alabama's offer to become the next coach of the Crimson Tide. I'm happy for the Tide that they succeeded in snagging a first-choice-caliber coach for the first time maybe since Gene Stallings left T-Town; I hope Rodriguez knows what he's getting into with Bama's notoriously difficult-to-please fanbase, though, and I have to wonder what prompted him to leave the warm embrace of his alma mater in Morgantown, where he is pretty much a demigod at this point, for the 24-hour tightrope walk that is coaching at Alabama. Was it the bigger money, the chance to coach in the toughest conference in the country at one of college football's most heritage-laden programs? Or . . . 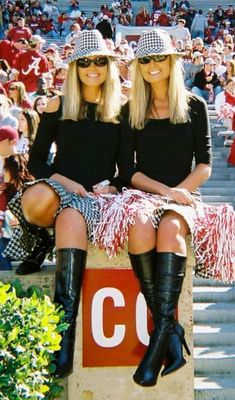 Whatever the reason, Tuscaloosa welcomes you with open arms. For now.

· At the other end of the spectrum, we have ESPN.com's final "Bottom 10" of the 2006 season, and it should come as a surprise to exactly no one that Florida International and Duke, the only two teams in Division I-A to go winless this year, wound up #1 and #2. So I'm with Benny at The M Zone: We need to pit those teams against each other to see who's really the worst. This "Toilet Bowl" is actually an idea I've had kicking around in my head for a while now, but it's time to go ahead and see what would happen on the field, because really, isn't that the only way we could know? My personal calculations have Duke winning a 22-21 nailbiter, but your mileage may vary. I think it'd still be a more compelling matchup than Central Michigan vs. MTSU in the Motor City Bowl.

· Speaking of bottom-feeder matchups, I'd like to see some kind of celebrity cage match between Lindsay Lohan -- elitist, rude, possibly developmentally disabled -- and anti-undergarments activist Britney Spears. Last one to vomit drunkenly all over herself, fall down, and flash her cooter at the audience wins. 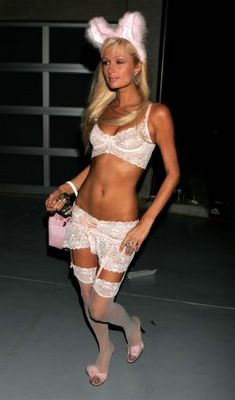 Yeah. I love kids. Being a mom is hott.

· Congratulations to Birmingham resident, Auburn grad and Official Friend of Hey Jenny Slater George Eich, who won the HJS Open College Football Pick 'Em contest so convincingly that he could've gone oh-fer the final week and still won. Yours Truly managed a podium finish with a second-place tie with the Annapolis Crab Trawlers, and also came in first in buddy Kevin's group, which used "confidence points" as opposed to point spreads. So I guess what that means is I'm good at picking winners, but George is the one who's actually going to be making money at it. Or something.

· There But For The Grace Of God Dept.:

An American Airlines flight was forced to make an emergency landing Monday morning after a passenger lit a match to disguise the scent of flatulence, authorities said.

The Dallas-bound flight was diverted to Nashville after several passengers reported smelling burning sulfur from the matches, said Lynne Lowrance, spokeswoman for the Nashville International Airport Authority. All 99 passengers and five crew members were taken off and screened while the plane was searched and luggage was screened.

Wow. Wow. I mean, the only reason this happened to her and not me was because I don't bother to light a match after I let one rip. Come to think of it, I usually don't even bother retiring to the bathroom, either. I usually just blast one out and then laugh uproariously about it. Or I pull the sheets over the girl's head and trap her under the covers with it, as per the old "Dutch oven" trick. I think it's funnier that way, n'est-ce pas? Basically I look at it like this -- there are two kinds of people in the world: People who can admit that farts are hilarious, and damn dirty liars.

· In case you were wondering which college football team the SI.com Cheerleader Curse is going to whack in the bowl season, it's Florida State. Which shouldn't come as a surprise, given that they were probably going to be an underdog to UCLA in the Emerald Bowl anyway; I just thought their cheerleader, Lauren Sauer, was adorable, that's all. So don't go saying anything bad about her on eBay. 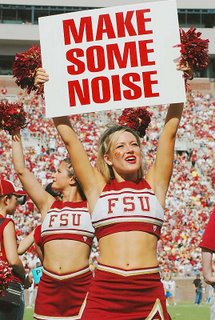 When juxtaposed with the previous item, that "Make Some Noise" sign makes me laugh.

· And now the Random Ten:

Now you're welcome to put your own Ten, and your own handicapping for the Duke-FIU matchup, in the comments.
Posted by Astronaut Mike Dexter at 8:00 AM

Email ThisBlogThis!Share to TwitterShare to FacebookShare to Pinterest
Labels: football, Friday Random Ten, hot chicks, teh suxxorz, the Alabama coaching saga, you know what I blame this on the breakdown of? society

What gets me about Rodriguez is all the "I love West Virginia" sanctimony that preceeded his taking the UA job. That has all the truth of the "I have full confidence in Joe Blow" just before he gets the axe line.

1) I second the comments about houndstooth.

3) Speaking of Britney, she needs to stop encouraging her new BFF from Camp Showmyhootchee to breed. Failing that, someone should knock out Paris Hilton with an "Heiress" soaked cloth (like ether!) and tie her tubes before the madness reaches another generation.

4) I would expect that FSU's best chance against UCLA would be to let Ms. Sauer handle the offensive play calling. That way she might actually have something to celebrate.

Doug you are a brave man. "Brandy" in the 10? I would pay to see a death cage match between Looking Glass and the Beastie Boys. Glass would clean their clocks.

I used to think Rodriguez was a fairly bright guy. Not so sure anymore. He's got a potential national championship shot in the next two years at WVU. I don't see how he gets even close in the next 5-10 years at Bama. He's going to have to trade an athletic style playbook for a power running plan. I guess the income and community upgrade were too compelling. Put me down for 4 (years) and out.

Uh, but Rodriguez is STAYING at WV...

For the love of Bear Bryant...I willt ake those two young ladies home and explain the ins and outs of goin' deep to the tight end.

Someone had to say it...