The spoiled child, spared the Rod. 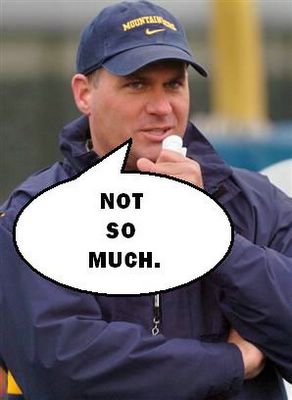 So, yeah, the whole Rich-Rodriguez-to-Alabama thing, not really happening after all. Thanks, local media, for making me look like a douchebag.

Really, you have to live here to understand how the local newspapers, TV people, and radio stations get geeked into the stratosphere at the merest hint that something might be happening with the Crimson Tide. Every TV station except Fox 6 was all over the place last night reporting that Rich Rodriguez was coming; the ginormous 64-point headline on the front page of the Birmingham News was "Rodriguez ready to roll at Bama" or some such nonsense. So much for objectivity and a healthy skepticism. But anyway, no, Rodriguez isn't coming, there is no Santa Claus, and the check really isn't in the mail.

I called into JOX 690, the local sports-talk station, Friday afternoon as Dunaway and Brown were chatting excitedly about the prospect of Rodriguez coming to Tuscaloosa. I offered my respectful opinion that no way would he take the Alabama job, because he's revered as a demigod and winning Sugar Bowls in Morgantown, and why would he pass that up to take a flier on a job where he can count on getting axed after three or four years if he doesn't recreate the Bear Bryant dynasty? I was surprised at the response I got from Dunaway and Brown -- they normally come across as pretty level-headed and properly hype-suspicious of most things sports-related in Alabama, but they were acting like Rodriguez would be kissing Mal Moore's ring and offering him his firstborn child for a shot at the Alabama job. Better conference, more pay, more TV time, yada yada. Well, apparently that's not enough when the fanbase can be counted on to levitate with rage and talk replacements the minute you lose to Auburn.

I hope for Bama's sake that this drills into their skulls once and for all the fact that their coaching job is not what it used to be, for the simple fact that -- and I know I'm repeating myself here -- every time Alabama whacks a head coach, they make the job that much less attractive to any potential replacement. I've already used the hot-girl-who's-a-total-bitch metaphor to describe the Alabama job, so here's another one: Alabama in the 2000s is like Jaguar was in the 1980s. Remember how Jaguars used to be -- absolutely gorgeous machines, so swank and luxurious they even smelled better than other cars, but with quality levels that wouldn't have passed muster at Hyundai? The classified ads were chock full of Jags whose owners were dumping them after only one or two years because they couldn't stand to rebuild the transmission or completely replace the wiring one more time, and sales dropped into the pooper; it took a buyout by Ford to turn things around. Well, that's where Alabama is: It's a beautiful, storied program that nobody wants to coach because they have no confidence it's not going to leave them stranded on the side of the road after a few years. It's sad, but it is what it is. 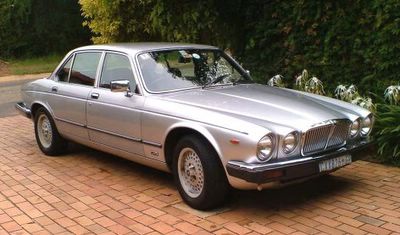 So I don't know what the fuck Alabama does now, but if I were them I'd focus less on hiring a new coach and more on hiring a new athletic director, because Mal Moore certainly doesn't seem capable of finding his ass with both hands and a map. First you fire a guy without having his replacement already lined up, then you not only offer a guy a job not knowing whether he'll take it, but you announce the offer to the media without even knowing if he has taken it? Smooth move, Ex-Lax. It's habitual for new ADs to want to choose their own coaches anyway, so dump Moore, which is a virtual inevitability at this point, find his replacement ASAP, and then let that presumably more competent replacement choose his own guy.

My suggestion: Steve Kragthorpe, who brought Tulsa back from the dead. And don't act like you deserve any better.
Posted by Astronaut Mike Dexter at 7:06 PM

It's the Greek tragedy of college football. They really had no plan B, C, D, E, F or G, did they?

Somewhere, Mike Shula is probably taking a hot bubble bath and smiling ever so slightly. Whilst counting his money...

This may set them back as badly as probation. Is Ray Perkins still available? Ray Goff? Ray Charles?

Bama football job = UCLA basketball job, and Bear Bryant = John Wooden. Unrealistic fan bases living in the past who will axe your ass if you don't create a dynasty in 3-5 years.

Shit, though, Ben Braun might be doing just that...

I was hanging out last night with a Turkish girl friend of mine who mentioned that her favorite band is The Pet Shop Boys. When talking excitedly about how she got to see them in concert in SF last month, she said, and I quote: "I can die now, I have seen The Pet Shop Boys." I thought you would like to know that such women exist.

The best part of the Jaguar analogy is that it forecasts total utility; they've blown through probably billions and still can't make any money even though they're making cars of unrecognizable quality... So 'Bama could hire someone great and 15 years later still blow.

for "total utility," I meant "total futility," the "f" really is important there.

In the event of the man's hiring, fun will be had.