OK, I warned you guys when I first started this thing that, now that I'm no longer doing a strictly political blog, I was going to be breaking with my long-standing policy of not posting pictures of pets. And since this was a pretty big weekend for Jenna the Boston terrier, I felt compelled to put a few more on here. 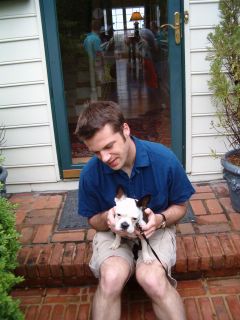 Saturday was "Do Dah Day" here in Birmingham, an annual event that takes place at a couple of the parks near my apartment and benefits the local Humane Society. It starts off with a parade, in which a bunch of people (not me) typically dress up their pets, and then the rest of the day is music, food, and people taking their dogs all over the park to give the dogs the chance to sniff as many other dogs as possible. 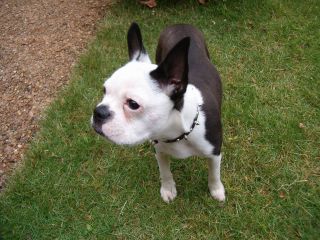 The weather was kind of crappy for most of the day, but at least it didn't pour down rain like it had the previous night. (These pictures were taken by my friend Erin at our friend Tom's house, which is right across Highland Avenue from the park where the festivities were taking place.) 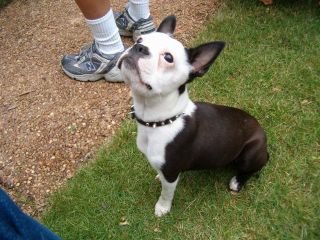 Jenna could not have cared less about the parade or the frisbee-dog competition or any of that other stuff, interestingly enough -- for virtually the whole day, she had her nose in one of two places: 1) another dog's crotch, or 2) down in the dirt sniffing frantically for dog treats anyone may have dropped. By the end of the day, she had pretty much eaten her weight in the free Milk-Bones various people were giving out. 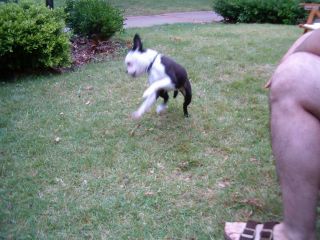 Jenna is blurry in this picture because she's literally flying through the air, pouncing on a dog treat someone threw her way.
Posted by Astronaut Mike Dexter at 8:07 AM

My bro Chuk did all the promotional artwork for Do Dah Day one year.

Waaaaah I want a puppy...

They are so cute at that age. But, just wait until she hits puppy adolesecence. I wanted to kill my puppy or to drop him off on some back road and keep driving. He gave me the gray hairs that graduate school and marriage didn't.

let's get some pictures of that puppy on her level, not from above - she'll be even cuter, I am sure, and looking less like her owner!!