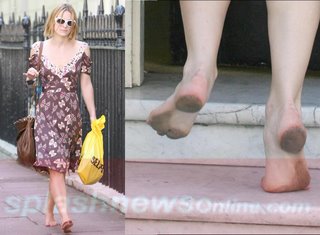 I guess she's taking the breakup a lot harder than I thought. So in a way I feel kind of responsible, yet in no way did I ever indicate to her I thought walking around in public with no shoes on was acceptable. On the other hand, maybe she ate 'em, in which case I guess we upgrade this to a push.

· Your favorite soccer correspondent and mine Kanu has been doing some great work the last couple of days covering the World Cup final and the attendant controversy over Zinedine Zidane's "head butt heard 'round the world." Now, first of all let me say I'm not entirely unsympathetic to Zizou's anger at whatever Marco Materazzi said to him that allegedly inspired the head-butt -- even a nobody like me, simply by virtue of having stuck my neck out in a political sense, has been hit with one or two really unnecessary mother-centered insults that made me want to go out and choke a bitch. But Zizou should've known better than to do something like that, if only by virtue of having had such a lengthy soccer career, long enough to know that a) trash talk, even of the wildly disgusting and gratuitous variety, is pretty much par for the course in sports, and b) you don't put your own desire for a get-back above the good of your team. Now, as Kanu points out, Zizou's absence from the rest of the match turned out to be negligible unless you think he could've nailed a goal in the last nine minutes of the second OT, especially since David Trézéguet, the only one to miss a shot in the penalty-shootout phase, would've still been one of France's five penalty kickers even if Zidane had still been in. But this was still one of the biggest stages in sports, and if Zidane honestly thought it was more important for him to put Materazzi on his ass than to be there helping out his team in the final minutes, it was an incredibly selfish attitude to take. If ZZ's attitude during the ceremony welcoming Les Bleus home from the tournament is any indication, he's starting to realize that this incident is already turning out to be a black mark tarnishing the end of what was otherwise a stellar career; if nothing else, maybe it'll be a cautionary tale to others. 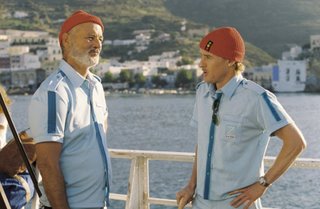 Whoops, wrong Zizou. Though this one could knock a motherfucker out, too.

· Elsewhere on the sporting tip, Orson Swindle has found a way to bring even the mightiest titans of SEC football low: dredge up their promotional appearances on behalf of "Yella Wood." Naturally, as a Bulldog, I have witnessed the Jim Donnan ad he refers to, and yes, Jim Donnan spends most of the ad looking like he's pondering how many times he would rather have his scrotum stomped on than appear in the ad. Which is coincidental, since most of us Dawgs spent the 1999 season -- the one in which I think that particular ad debuted, though I may be mistaken -- wondering how many times we would rather have our scrotum stomped on than have to watch our secondary get dismembered by yet another mediocre opposing quarterback. Good times, and by "good" I of course mean "excruciating."

· Apropos of nothing (like pretty much everything else in this post), but does anyone else remember M.A.C.H. 3, the laserdisc-based fighter-combat arcade game that was pretty much a staple of my Showbiz Pizza Place experience from 1983 to at least 1987? Somehow got into a discussion about favorite old video games today and this one was definitely mine. Anyone have any fond memories of rocketing through M.A.C.H. 3's photorealistic landscape bombing the crap out of stuff back in the mid-'80s, or have any other favorite early arcade games they want to give props to? 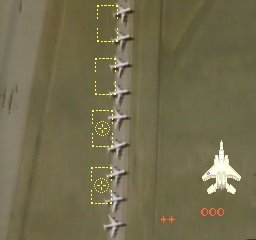 Trust me, this was the shit.

· And finally, while I try and think up something more substantial to say, entertain yourself with this link courtesy of Andrew Sullivan . . . Virtual Bubble Wrap. 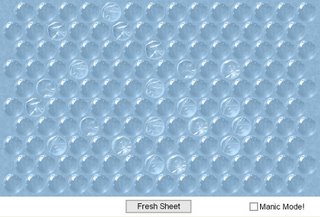 For optimum enjoyment, turn the volume up as loud as you can at work and play repeatedly.
Posted by Astronaut Mike Dexter at 7:54 PM

Played MACH3 a little, but I was all about 1941. That loopoty loop move you could pull when you were about to get blown out of the sky was outstanding.