The land of the free and the home of the sweaty.

I was in Atlanta earlier today, and I mean lots earlier today, to be at the finish line of the Peachtree Road Race when my dad came in. Just for the record, this past extended weekend really put into glaring focus just what a weakling I am. Saturday afternoon the whole family took our dogs for a walk at the park, and my sister and I had to head home about halfway through, partly because Jenna was getting overheated but partly because my sister's hip was hurting and my back was spasming from a months-old injury. So our parents, both in their late 50s, keep truckin' along while Ann and I limp back home, sweating and complaining about our respective injuries like a couple of 80-year-old retirees in Boca. 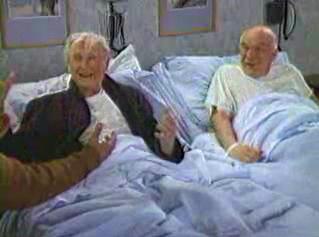 So that was the first thing, and then this morning we woke up at 5 a.m. to drive up to Atlanta and meet my dad at Piedmont Park. And while my dad is running 6.2 miles, a substantial part of it uphill and all of it in Georgia's traditional 582-percent summer humidity, I'm standing there in the park with my mom and my sister, and I start to feel weak and lightheaded. Seriously, just standing there. My dad runs 6.2 miles and comes out of it smiling, and I practically have to have the fainting couch wheeled out for me just from standing in the park. 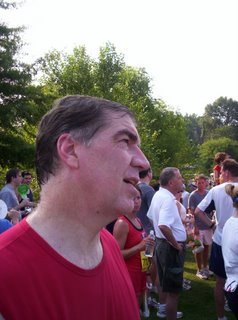 A rather sweaty Clark Gillett, post-race.

"During the first mile or so," he told us later, "I'd be running and I'd get passed by an attractive young woman, and I'd think, 'I wish I had an award to give out for the best buns on the course.' But after about the fourth or fifth mile, when we were running uphill into Midtown, I wasn't looking at anything other than the pavement right in front of me."

But anyway, Dad made it, without showing any outward signs of major ill health, and proved once again that he's at least ten times the man I am. Congratulations, pop.

Anyway, funniest moment of the morning came as we were walking back across the park to where all the drink stands were set up along 10th Street. Dad points to the football stadium at Grady High School, whose light towers are rising up just across 10th from where we were, and asks, "So is that Bobby Dodd Stadium?" I laughed hysterically and said, "No, it's Grady High School, but the fact you actually thought that might be Bobby Dodd speaks volumes about the state of Georgia Tech's football program."

I'm back in Alabama now, where fireworks are legal, and they're going to be shooting off the fireworks from behind Vulcan sometime around dusk. Of course, we'll be doing our own shooters here in the front yard of my apartment building well before then. Happy birthday, USA!

ADDED: My best attempt at a shot of the fireworks being shot off over Vulcan here in Birmingham: 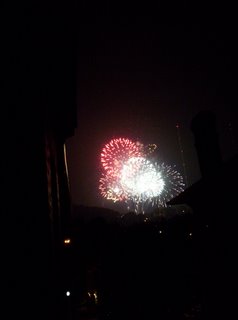 If you squint really hard you can see Vulcan himself.
Posted by Astronaut Mike Dexter at 3:32 PM

Email ThisBlogThis!Share to TwitterShare to FacebookShare to Pinterest
Labels: my sordid personal affairs

Now, Doug, if your much beloved father is looking up towards the sky, looking at stadium lights, how much difference it this this going to look compared to this, over the tops of the city landscape? Presumably, unless he is superman (and maybe he is if in his late 50s he runs over 6 miles at the drop of a hat)and has xray eyes, he will not see the difference in the size of the stadium under those lights! Give GT a break!

Doug, your Dad is a real man while you're just another liberal pussy.

To hmmmm: You didn't identify which picture was of which school.

To anonymous: Liberals can run 10Ks also. Typical of a conservative to denigrate those with whom they disagree in sexual terms- they don't have the ability to think in other than simple terms. Complex issues confuse them.

OK, I think the one which sends you to http://darlin12.tripod.com/pictures/insurancebobbydodd.JPG is Bobby Dodd stadium? And of course liberals run 10ks too - did you think Doug is the get of a conservative? Related to a few, but no descended from one!