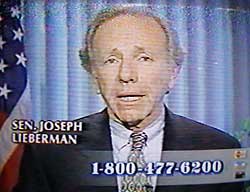 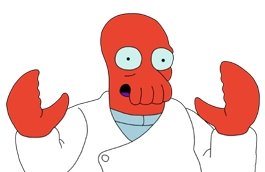 Surely I'm not the only one who's realized just how much alike these two guys sound.

I haven't talked much about Joe Lieberman on this blog, mainly because I figured everybody was smart enough to suss out that I highly disapproved of his new chosen role as Bush's lap dog. But permit me to rant for a spell about Lieberman's latest spectacularly ill-advised escapade, an attempt to collect 7,500 signatures on a petition so that he can run as an independent in the event that he loses the Democratic primary to Ned Lamont on August 8.

First of all, it was monumentally stupid for Lieberman to basically admit there's a chance he could lose the primary to a previous unknown. And anyone in the state of Connecticut who can still fog a mirror should quickly recognize Lieberman's insistences that he's still a "loyal Democrat" as being distinctly of the methinks-the-lady-doth-protest-too-much variety, since while Lamont has vowed to support Lieberman in the general election if Lieberman wins the primary, Lieberman obviously never had any intention of doing the same in the event of a Lamont win.

The knee-jerk response to all of this from the conservative wing is "You only care if he's a Democrat; you value party loyalty above everything else." Well, that's some mighty ironic righteous indignation coming from the people who tore Jim Jeffords a new one when he jumped from the GOP back in 2002. But to actually answer that accusation, no, I'm not opposing Joe Lieberman because he's thinking about jumping ship; I'm opposing him because he's wrong. He's wrong as a Democrat, he'd be wrong as an independent, and he'd be wrong as a Republican. And no, I don't value party loyalty above everything else -- I value competent government and a respect for the will of the people above everything else, and it's become clear that Lieberman values neither of those things. His lack of concern for the first is evident in his insistence on supporting every single stupid thing the Bush administration does vis-á-vis the war on terror, no matter how half-assed or misguided, to the point of accusing people of imperiling the country if they dare to criticize the president; his contempt for the second is evident in his apparent willingness to thumb his nose at the Connecticut electorate. If they choose Lamont in the August primary, I don't see how anyone can interpret that as anything other than, "Sorry, Mr. Lieberman, we've decided you're not the person who can best represent us in the Senate"; Lieberman, evidently, intends to respond, "Am so! NYEEEAHH!"

In short, not unlike John McCain before him, Joe Lieberman is showing all the signs that he's started believing his own press. Trouble is, that press is coming from neocons whose most defining character trait up to this point has been a near-total inability to differentiate their asses from a hole in the ground.

This all reminds me of a particularly embarrassing episode from Bob Dole during his unsuccessful 1996 presidential bid. At a late-October rally in Houston, with Dole's prospects looking grim and the campaign shifting into desperation mode, Dole began reciting a list of various "ethical lapses" from Clinton's first term -- which, naturally, were mostly molehills that had been built into mountains by the Republican Congress and the right-wing media -- and then asked, "Where is the outrage? When will the voters start to focus?", as if it was the voters' obligation to get mad about these things and carry Dole into the White House.

What Bob Dole apparently did not understand -- and he paid for this lack of understanding in the end -- is that it is not the voters' responsibility to please a candidate to the point where he considers them worthy of voting for him. It is the candidate's responsibility to please the voters, and if he doesn't do that, they vote his ass out. It's kind of the whole point of an election.

After 18 years in Congress, and after five years of being stroked and petted by the Bush administration for being a good little non-critical lap dog in terms of their infuriating mismanagement of the war on terror, Joe Lieberman has apparently developed an awfully big head, to the point where it's the Connecticut voters' responsibility to appreciate and applaud his so-called principled stance on the war, rather than his responsibility to explain how that so-called principled stance is doing his state (or his country) a lick of good. He's right, goddammit, and if the voters of Connecticut refuse to recognize his unimpeachable rightness in the primary, the he's just gonna bounce right up again and force 'em to recognize it in the general. For Joe Lieberman, his senatorial seat has gone from being a sacred responsibility to being a birthright, and when he says he has "loyalties that are greater than those to my party," that may be the one sincere, correct thing he's said in the last two years: It's starting to look like Joe Lieberman's greatest loyalty is to Joe Lieberman.

I think Atrios is right in predicting that Joe's "true loyal base -- Republicans" will not rush to his aid nearly as quickly as the Lieberman campaign almost assuredly believes they will. The current GOP is nothing if not opportunistic to a cutthroat degree, and given the choice between keeping a loyal (if big-I Independent) lapdog and picking up a Senate seat for the Rs -- particularly in a year when the Rs are in real danger of losing their Senate majority -- the Republican Party will aim for the latter and leave Lieberman twisting in the wind. I also think that if Lamont beats Lieberman in the primary, and the Democratic Senatorial Campaign Committee continues supporting Lieberman even though he's an independent, then I may just have to cut ties with the national Democratic Party myself, at least until they get over their near-terminal case of Republican Lite Syndrome. But if Lieberman beats Lamont in the primary, then despite my disappointment, I'll shut up about this and accept it, because again, it's the will of the people that counts. If only Joe Lieberman felt the same way.
Posted by Astronaut Mike Dexter at 9:00 PM

The DSCC has already indicated it will support whoever wins the primary, which I ultimately think will be Lieberman. Never underestimate the power of the voting population to flock to name recognition and the incumbent. It happens quite frequently, unfortunately, rather than investigate the candidates more thoroughly.

I've never really gotten all up in arms over Lieberman. The way I see it, he votes with the party on most issues outside of the Iraq War. He did support the bankruptcy bill, I believe, but so did a large number of congressional Democrats. I wouldn't support him for a higher office, but it seems to me that we're setting up a litmus test in Iraq ... all the while decrying other litmus tests that Republicans have set up on occasion, such as abortion and gay marriage.

Dude, once the Joe-mentum gets going, that other dude's got no chance. Just like 2004.

I honestly don't think the issue here boils down to something as simple as a "litmus test" on Iraq, though the Lieberman campaign (and, to a lesser extent, the mainstream media) have been doing their level best to say that it does. After all, there are plenty of Democrats in the Senate who have vowed to keep up the fight in Iraq but remained popular enough that any re-election prospects seem safe -- Hillary Clinton being the most prominent, but also Ben Nelson and Herb Kohl (all running for re-election this year), Harry Reid, Joe Biden, and others. That's not to say that none of these people have incurred any sort of criticism whatsoever, but it certainly hasn't been enough to imperil their re-election chances. Voters may or may not like their stance on the Iraq war, but that one issue isn't the deciding factor in their popularity.

The difference with Lieberman, I think, is that not only has he vowed to keep troops in Iraq, he has displayed no interest whatsoever in exercising any kind of oversight of the Bush administration's management of it. His stance isn't just "Keep the troops in Iraq," it's "Keep the troops in Iraq and don't you dare criticize the president no matter what happens," and I think that's what pisses off the Connecticut voters the most. The Democratic Party has demonstrated that you can hold differing views on the war without being considered "disloyal" to the party, but if you're going to get kisses on the cheek from President Bush and deem any criticism of him as detrimental to national security, then you're going to get called on the carpet for it, and that's what the folks in Connecticut are doing, as they have every right to.

I think Biden, to a lesser extent, kinda falls into this category as well. The primary difference being that he, at least, does argue for some sort of deviation in the administration's plan in Iraq. But he's definitely more hawkish than Hillary or Reid.

Not saying I'm a fan of Lieberman - I wasn't a fan when Gore tabbed him as VP in 2000. Didn't Lieberman, in 2004 during the primaries, call for a different approach to Iraq, but has now retreated back to the administration's game plan? It would seem to me that is of greater concern than simply sticking to the existing, faulty policy. It's much more craven, in my mind.

I hadn't thought of that, but you're right, Lieberman has spent an awful lot of time over the last few years gravitating toward whatever/whoever is most popular at the moment. In 2000 he was critical of Bush, obviously, because he was running against him; two years later he was Bush's best friend. In 2004 he ran for president and suddenly started criticizing the Bush administration again, but once Bush got re-elected he was back to being buddy-buddy and scolding anyone who dared criticize the Prez. Now it's 2006, Bush is a big albatross around his neck, so he's back to trying to distance himself from the White House again. Just another reason for Connecticut to drum him out of office, I guess -- one of Lieberman's big talking points has been that supposedly nobody knows who Ned Lamont is or what he stands for, but after six years of this bobbing and weaving, how are any of them supposed to know what Lieberman stands for?