Wow, this is gonna piss some people off.

Given that Bush's approval ratings have been at diarrhetic levels since even before Hurricane Katrina, it really doesn't come as much of a surprise to me that he was ranked as the least popular of the last 10 presidents in a recent survey (hat tip to Atrios). Even the fact that he's less well-liked than Nixon didn't shock me that much, because we always tend to want to look more kindly upon people after they're dead.

But what really surprised me about the survey was the fact that Bill Clinton came in second out of ten, only one percentage point out of first place. And you know who the most popular president was? It was JFK -- meaning that Bill Clinton, that horrible, dishonest, pot-smoking, intern-balling redneck, came out ahead of Ronald Reagan, whose face right-wingers were very recently trying to put on the U.S. dime in place of FDR's. Personally I'm of the opinion that the U.S. Mint should announce that it's creating a new three-dollar piece bearing Clinton's face, and just as the right wing is ginning up to start making "bogus as a three-dollar bill" jokes, the mint announces it's going to be a coin and not a dollar bill. But all of this is probably going to have to wait until Bill's dead anyway, so I guess this is going to have to go on the back burner for the time being.

Anyway, between this and the drag-ass approval ratings, I hope it finally puts out to pasture the myth that Bush is still a popular president who can get away with whatever he wants because he is who he is and the American public just luvs him. Secondarily (is that a word?), I hope it finally gets some people to admit, even if only grudgingly, that Bill Clinton -- in what he did as the chief executive of the country, if not necessarily as a human being -- was a pretty good president. Or, barring that, a total badass. 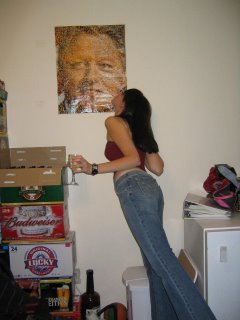 Bill Clinton: the man, the president, the straight-up pimp (and I mean that in a good way).
Posted by Astronaut Mike Dexter at 9:14 AM

loved it so much I stole it.

I hate to correct you Doug but no secondarily is not a word. It's secondly.

But Doug...George's dismal apporval rating is all Clinton's fault. Duh.

i KNEW we agreed on everything. btw, secondarily IS a word.

Hot Democrats are a rarity in the South. Though, I'm sure there's no limit of hot young Republicans that want a piece of the former president.