I would be remiss if I didn't call your attention to the Michigan-affiliated MGoBlog and its proprietor Brian, who picks up what Ian started, Nathan continued, and Yours Truly perfected (well, OK, I can't back that up) by introducing his own take on the college-football-teams-as-pop-culture-analogues idea: college football teams as "South Park" characters.

I don't quite know what Brian was getting at by pairing Georgia with Mrs. Cartman, which seems to imply that UGA is a dirty, dirty whore. Though I guess that beats a talking turd, a woman with an undeveloped fetus attached to her head, or a five-assed monkey. Really, it's not the dirty-slut accusations I'm mainly pissed off about, it's the inference that we're responsible for the birth of Cartman/Steve Spurrier. Though if you think about it, Spurrier would never have been the man he is today had he not had 1) regular beatdowns from Georgia when he was a player, stoking a lifelong desire for revenge, and 2) weak Ray Goff/Jim Donnan teams to kick around and thus aid him in his ascent from up-and-coming coach to living legend. So in a way, Georgia really did give birth to Spurrier. Weak, dude. Screw you guys, I'm going home. 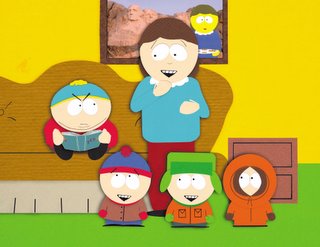 Georgia/Cartman's mom: A dirty slut, perhaps, but we still don't respect Florida's authoritahhhh.
Posted by Astronaut Mike Dexter at 7:56 AM