Double Haterade, on the rocks . . . and leave the bottle.

So I'm sitting here on my couch, Jenna curled up next to me (and if you're new to this site, her last name isn't Jameson, so no, that isn't nearly as cool as it sounds), I'm trying to think of things other to do than clean up my dump of an apartment for the Festivus party tonight, so I've got ESPN Classic's "Instant Classic Marathon" on 'cause there ain't shit else to watch until Tampa Bay at New England comes on at 12:30. It's apparently the Joe Paterno Gold block we're in right now, because they just showed the Ohio State-Penn State game from earlier this season and now they're showing Penn State-Northwestern.

And I'm having trouble figuring out why PSU-NU qualifies for "instant classic" status, because I'm not one of those people who thinks that a last-minute big-play ending automatically confers "classic"ness. Sometimes it's just a team somehow needing a last-second big play to snatch victory from the jaws of defeat against a team they would've put away easily if they hadn't been half-assing it for 59 minutes, and I think that pretty much describes what we're looking at with the Penn State-Northwestern game. I mean, yeah, Northwestern's good and all, they're going to a bowl, but seriously, looking at how Penn State finished the season, did NW even have any business playing them close? And the TD pass that won it for Penn State -- which they just showed as one of the final four nominees for "Pontiac Game Changing Performance of the Year," and believe me, "game-changing performance" is one of those ad nauseam phrases which, along with "they've got to play their game" and "comin' to your ci-tayyyy," I would gladly pay ESPN to never have to hear again -- wasn't even so much an awesome play by the receiver as it was a godawful tackle by the NW cornerback, who almost looked as if he'd bet the farm on the receiver not actually catching the ball. This isn't meant as a knock on the Nittany Lions or anything, but I wonder just how excited they get as they watch this game being played over and over again, knowing that their Orange Bowl season basically hinged on a desperate pull-it-out-of-your-ass comeback against a team that wears purple uniforms. 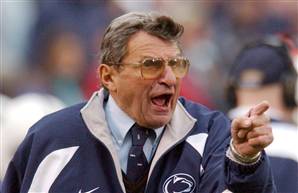 But anyway, my real reason for posting this was to link to Sexy Results' rundown of the year's worst albums -- I have to confess that I haven't heard any of them, so jaded am I with the state of popular music that I pretty much don't buy anything these days unless it's by the Pet Shop Boys or Underworld or somebody posthumously digs up some unreleased Johnny Cash demos nobody knew about, but Ian does his usual bang-up hillarity-ensues job of writing, and I have to give him props for being a Kool Keith fan, such as he is. Keith can be a little much to take sometimes, to be sure, but anyone who can write a song called "You Live At Home With Your Mom" can't be all bad. Not that you care, but "You ain't got enough to buy a small soda at Johnny Rocket's, B" is one of the subtlest, most underrated rap disses of the last decade.

I also have to bow down to Ian's dissection of the song "My Humps," one of those songs that has somehow become massively popular despite the fact that you're more likely to find a black lesbian at BYU than you are to find any man, woman, or child in North America who will admit to liking it. I remember when movies like "CB4" and "Fear of a Black Hat" (which is indescribably awesome, by the way) came out, everyone was laughing about how the rap groups in question wrote songs like "Sweat From My Balls" and "My Peanutts," because surely nobody could ever become a huge mainstream success writing songs like that. But now we have a song that's basically "My Tits & My Ass," and it's blowing up like the Godfather. Plus I'm old enough to remember a time when the Black-Eyed Peas actually weren't wack as fuck, which makes me wonder what on earth made the Peas decide to lower their sights from potential De La Soul heirs apparent to group most likely to release a song whose title is followed by "(feat. Kevin Federline)." If they do have a remotely lasting contribution to pop music, I doubt it'll be substantially felt until 2016, when the Opelika High School class of '06 gets back together for their ten-year and tries to remember what their underage, fake-ID-packing asses were grinding salaciously to at Auburn's notorious Blue Room on Friday nights. 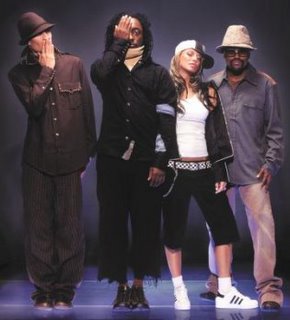 In the immortal words of Kool Keith, party-figure perpetrator, undercover hater, smell your cheap cologne in the elevator.

Ian's right that "Hollaback Girl" -- which has been well and thoroughly dissected on this site -- belonged on Pitchfork Media's list of the 15 worst releases of 2005. It's audience participation time, so feel free to leave your own nominees for the worst songs/albums of the year in the comments. Or hell, worst anything -- movies, cars, marriages, fast-food items, whatever. I'll assemble a list of Worst Things of 2005 toward the end of the year, and we'll have ourselves a nice little Player Haters' Ball out of the whole thing. It'll be great.
Posted by Astronaut Mike Dexter at 12:08 PM

"My Peanuts, big and large, getting smooth with the groove like El Debarge."

Fear of a Black Hat is one of the greatest movies ever made...

well, that might be exaggerating a bit, but still a great flick.

""My Humps," one of those songs that has somehow become massively popular despite the fact that you're more likely to find a black lesbian at BYU than you are to find any man, woman, or child in North America who will admit to liking it."

Doug,
You remarks about the Lumps song are both spot on and funny as hell.
But if you think about it, is it really that much worse than the damn milkshake song from a year ago?

I dunno...I thought "CB4" was a little underwhelming. But thanks for the props. Your residual traffic from the Simpsons post is keeping my daily views on the up-and-up despite my break-induced laziness.

Also, good call on the Dr. Dooom. Most people are surprised when I tell them that there's at least three Keith solo projects I like better than Octagonocolegyst (sic?). For my money, "Black Elvis" has got the best Keithisms..."You comin' so wack, you sound like the 'Bulworth' soundtrack." They just don't make 'em like they used to.

Ironically enough, the Black-Eyed Peas had a song on the "Bulworth" soundtrack . . . and if memory serves, it was the last worthwhile thing they ever did.

Alls I knows is that BEP was the best opening act for a rap concert I've ever seen. It was in 2000 or something, and they preceded Wyclef. All they did was rap for five minutes and spent the next thirty spinning on their heads with that breakdance stuff they used to do. Trust me, if you've ever seen a rap concert, that's a golden ratio for an opening act.