In the college-sports-blogging world there's this thing called the BlogPoll Roundtable, begun (I'm assuming) by the folks at MGoBlog who also started the weekly blogpoll, in which a different blog each week pose a number of questions and other blogs post their answers. I don't know if you have to be a blogpoll member to be "officially" invited to answer the questions, but shit, it's a free country, and the questions posed last week by Texas A&M & Baseball in No Particular Order seemed particularly interesting, so here goes nothing, or even less than that:

1. Why your school? Did you go to school there? Were you legacy, did you pick it for academics, for the football team, the party reputation?

Considering that I get geeked-up enough these days over Georgia football to sometimes induce mild dementia or bleeding ulcers, you might be surprised to know that I'm not one of those lifelong family-legacy Georgia fans who dreamt his whole life of going to UGA -- in fact, I never really followed college football that closely period before going there. All the schools I applied to -- Georgia, Michigan, Missouri, North Carolina, Texas, Virginia -- were big state schools with respectable party reputations and football teams (no offense to any teeny-liberal-arts-school-in-the-middle-of-nowhere alums, but that just wasn't an experience I was interested in), but my number-one choice was actually UNC, because it had both a journalism program and an English program that had really good reputations. But like just about every out-of-state kid who has ever applied to Chapel Hill, I got wait-listed, and that brought me to my second choice, Missouri, which has pretty much the top journalism program in the country. But I started wondering if I really wanted to go that far away from home, and when I asked the publisher of our local daily paper about it, he said the exact ranking of your school didn't matter nearly as much as what you did and what you got published while you were there. Not long afterward, my parents said that because I would get free tuition as a result of the HOPE Scholarship, they would take the money they'd saved up for college education and buy me a car if I decided to go to Georgia, so . . . Athens it was.

Of course, I'm demeaning UGA to say my only reason for going there was free wheels. The place got into my blood in a hurry, and I now loudly proclaim my Bulldog Nation allegiance to anyone who will listen, and quite a few who won't. 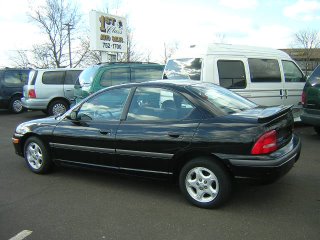 A Chrysler Neon Sport not unlike the one I got as a result of my decision to go to Georgia for free. Don't laugh -- with the metallic paint and the polished alloys, this was actually dope as hell in the Hardaway High School parking lot circa '95.

2. Name a player or two who had "THE GAME" against your school. I'm talking about a guy who simply dominated your team and all you could do was tip your cap and say, "Wow."

I don't know that this question is necessarily applicable in my case, since an opposing player posterizing the Bulldogs is almost always more likely to make me throw my cap to the ground and say, "Fuck." But like The Drizzle and I'm a Realist, I will forever be haunted by the stupefying memory of watching Ben Leard, a quarterback who will never be anything more than an easily ignored footnote in Auburn football history, annihilate the Bulldog secondary back in 1999 (the full horror recounted here). The dude simply could not throw an incomplete pass that night, and more often than not he'd lace one for 20 or 30 (or 70) yards right into the teeth of our inexplicably addled cornerbacks. Georgia Tech's Joe Hamilton had a pretty astounding game against us that season, too -- it wasn't a particularly good year for our defense back then -- and I'll never forget the numb feeling of riding the MARTA train back to my car as the gut-wrenching reality of Tech's 51-48 "overtime" "win" set in.

3. There are games that I have no interest in but I watch simply to see a certain guy play. What players from this season do you do the same for?

Not that this makes me superior or anything, but I never watch games for the sole purpose of seeing specific players, though I have tuned into games that I started out with little interest in and ended up keying in on one guy who was having a particularly impressive game. Football is a team sport in which everyone has to play their given roles to succeed, and there are few things I hate more than seeing one guy singled out and fawned over potentially at the expense of a lot of other talented, hungry guys. That's probably one of the reasons the Heisman Trophy race never fails to bore the living shit out of me -- I don't want to hear about the same five or six guys over and over and over again, especially if it detracts from coverage of my team, one that might have a legitimate chance at going to this bowl or that bowl. And maybe my opinion would do a complete 180 if a Georgia guy ended up on the Heisman shortlist, but I'm not sure it would -- sure I would've loved to have seen, say, D.J. Shockley win the Heisman this year, but watching this year's team of comparative no-names struggle and hustle and end up winning an SEC title has been an amazing thrill for me, and it's a hell of a lot better story than some puff piece on what kind of deodorant Shockley uses (which has pretty much been the journalistic caliber of what we've seen on Reggie Bush and Matt Leinart lately).

4. A few weeks ago we were asked who the best player to suit up for our school was. I'm curious who your favorite player to ever suit up for your school is? Certainly doesn't have to be a superstar, or even a starter.

Easy. Champ Bailey had the name, the number (my lucky number 4), the skills (on both offense and defense), and even the hot girlfriend (rumor had it he dated über-hottie gymnast Suzanne Sears while he was at Georgia) -- he basically lived the kind of life I and most self-respecting male football fans at UGA would've given money and various body parts to live. When I asked for a replica Georgia jersey for Christmas back in '98, I asked for a #4. When he got drafted by my beloved Washington Redskins the following year -- one of the best days ever, I might add -- I soon got a Redskins #24 to go along with it. Champ's playing for Denver now, but I'd probably still root for him even if he played for the Cowboys, and trust me, that ain't an easy thing for me to say. Hines Ward is another player who did pretty much everything at Georgia and did it with a smile on his face, and I'm really happy that he consistently gets major props in the NFL for being not only a talented player but also a team-oriented, stand-up guy. 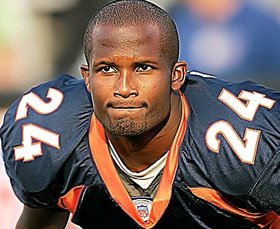 Champ Bailey, in the one jersey of his that I don't own, in deep thought as he ponders which opposing receiver will be the next to be posterized.
Posted by Astronaut Mike Dexter at 8:17 AM

I'll be dead in the cold, cold ground before I recognize Missoura'. Yeah, I somewhat regret the "passing up the car" thing, but I realize that I probably would've gotten something really stupid.

You thought about going to Missouri? Oh God, that's even worse than Georgia - there's nothing redeeming about Columbia at all.