All the news from the city so nice, they named it after the state in which it was located.

You know how some trips you go on, no matter how awesome or unforgettable they are, by the end of it you're tired and you're ready to go home and sleep in your own bed for once? Well, my trip to New York this past weekend wasn't like that -- I could've easily stayed for another week, or two weeks, or month and still had a freakin' blast. A lot of that has to do with the company I kept -- I stayed with my friend Arlana, one of my dearest friends of all time even if she did go to Auburn -- and I don't want to spend too much time going on and on about what an awesome time I had because Arlana already gave me a nonstop five-day hard sell trying to get me to move up there, but anyway, here's all the stuff I did. (By the way, if you find yourself wondering about the paucity of pictures in this post, it's because I don't actually own a camera of any sort. OK, yes, I've heard it, how about taking some of that energy you were going to spend belittling me and spend it buying me a fuckin' camera, k thx.)

Thursday: My ScareTran flight out of Atlanta landed at LaGuardia just about right on time, but we didn't actually get off the freakin' plane for another two hours. According to the captain this was because there wasn't an open gate for us to pull into -- so he literally just drove the plane around the taxiways for two hours musical-chairs style, like a guy looking for a parking space at the mall during Christmas shopping season ("Wait, is that guy pulling out? Is he -- damn!"). But this wasn't all bad, because I asked one of the flight attendants for a little airplane bottle of Dewar's to pass the time and got it comped. I highly recommend you try this if you are ever in a similar situation. Anyway, I took a car service to Arlana's place in Astoria, Queens, which is right next to the home of Frank and Estelle Costanza -- yes, the very house they always cut to on "Seinfeld" before a scene at Frank and Estelle's house. We had Thanksgiving leftovers and it was fricking awesome.

Friday: I woke up Friday morning to see . . . snow. Lots of it. I guess for someone who hadn't seen snow in literally three and a half years any amount would be a lot, but this was at least four or five inches' worth. Arlana and her roommate Olivia both had to go to work, so this was my day roaming around all by myself, and I got to do it out in the snow (and the rivers of dirty-ass slush running through the streets of Manhattan). In the morning I went to Grand Central Station and the United Nations, and in the afternoon I knocked out my Christmas shopping in Soho, along Madison Avenue and at Rockefeller Center. Oh, and also at Trump Tower -- yes, I got to walk through the very doors all those "Apprentice" jagoffs trudge through when they get fired!

Later that night we went to meet some of Arlana's friends at a bar called Naked Lunch in Soho, where it was apparently '80s night. Arlana crimped her hair before we left, in order to more completely embrace the '80s vibe, and spent the rest of the evening regretting it. I know I'm only going to embarrass myself by explaining exactly how happy I was to walk into a bar where Rick Astley was playing, so I won't; I'll only say that drinks in New York are second-mortgage expensive, so it helps to have a hot girl buying you drinks in an effort to get you hammered. You should definitely do that, should the opportunity present itself.

Saturday: Arlana and I got dressed up and went to see "The Nutcracker" at Lincoln Center. The production was beautiful; the audience slightly less so, since it was a Saturday matinee and that's apparently when all the kids with parents too negligent to properly discipline them go see the show, but we still had a great time. Later that night we gorged ourselves on thin-crust pizza and garlic rolls at Alba's Pizzeria in Astoria, and by the time I was done I was able to repel panhandlers with my breath alone.

Sunday: This was touristy-stuff day -- Arlana took me to Chinatown and Little Italy to buy T-shirts and whatnot (and a snowglobe, in keeping with a longstanding tradition at my office), and then to walk the Brooklyn Bridge. It was cold as hell but totally worth the effort, and here's a picture of me about 2/3 of the way across: 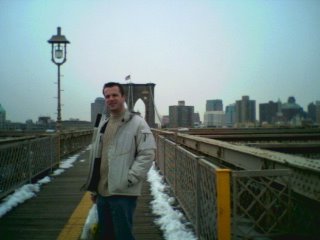 As we were walking back across to Manhattan, I saw a group of four or five Vespa scooters idling on the on-ramp to the eastbound lanes of the bridge, and I was going to make a joke about it since one of the long-standing themes of our Italy trip had been my annoyance at the predominance of scooter owners in Italy and all the, uh, scooting they did in heavily traveled pedestrian areas. But then they started up and went past us, with all the riders (male and female) hooting and hollering, and we saw that with the exception of some hats and scarves, they were all butt-ass naked. Fucking awesome.

Anyway, next stop was Ground Zero. I won't bother going into a long maudlin spiel about the poignance of that moment, because I'm sure it's been done by plenty of people with much more of a personal connection to it than I have, but it was pretty awe-inspiring to stand there and think that a little more than eleven and a half years prior, I had been standing more than a thousand feet above that spot, on the top floor of the most ginormous office building in the world -- and now it simply wasn't there, as if it was a hotel on a Monopoly property that someone had simply taken off the board and sold to get some money for other things. Arlana told me the story of a man who had witnessed the attacks from the Brooklyn Bridge and got out of his car and ran as fast as he could to the World Trade Center, where he raced up the stairs and started carrying people down. He died when the towers collapsed, and now the city commemmorates his heroism by staging a footrace from the Brooklyn Bridge to Ground Zero, following the path he took on 9/11. 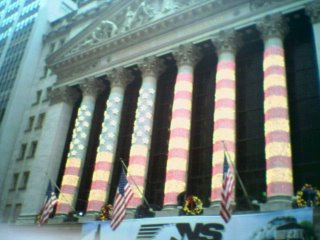 As we were wandering around the financial district hunting for a subway station where we could pick up the N/W line, Arlana called a friend of hers who told us to meet him at a sports bar called Mr. Biggs on 42nd to watch some of the NFL games and drink a few beers. When we got there I saw a guy standing just outside the front door who looked awfully familiar -- he turned around to talk to someone just as we walked by, but I caught a glimpse of his face, and I said his name just to see if it was him. Sure enough, it was Ty, my roommate from my senior year of college; he'd moved up to New York right after we all graduated and I hadn't seen him since. But there he was, the one guy out of 8.5 million NYC residents who could've potentially been standing outside that sports bar in Hell's Kitchen as we walked in. 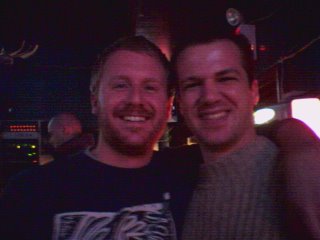 I can't adequately explain in words how freaking awesome that was. It was like hardly anything had changed, and I mean that in the best possible way. Ty joined in with Arlana's hard sell trying to get me to move up to New York, and I just smiled and drank my beer, trying to act like I wasn't seriously tempted.

We got back to Astoria and met up with Arlana's roommate for sushi at a place on Ditmars Boulevard, where we were served sushi by a drop-dead gorgeous Japanese girl I will henceforth refer to as the Beautiful Sushi Waitress, or BSW. The sushi was great and I think I caught the BSW checking me out as we left, which was a perfect end to a perfect trip.

Got home right on time Monday and my suitcase didn't even manage to disappear on the flight home, which was an improvement over the last plane trip I took. As we left LaGuardia and the plane hung a left to turn southward, I was sitting on the right side of the plane to see Manhattan stretched out before me, all the buildings and landmarks laid out where I could see them, Central Park still covered in a coat of white. If the preceding four days of sightseeing and Arlana's constant nagging hadn't been enough, that view alone made me start doing some serious fantasizing about applying for a job up in New York and moving on up there, furniture, Georgia shit, little dog and all.

good to have you back where you belong

I suggest making the jump to NYC. I did it in 2002 from Hattiesburg, MS and I absolutely love it. I live in Astoria too. There is a place in Astoria called the Bohemian Hall. It is the best place to drink in all of NYC, in my less than humble opinion. Can you tell me where that sushi place is? I don't get up to Ditmars much, but could make an exception...at least once.