All your stadium are belong to us. 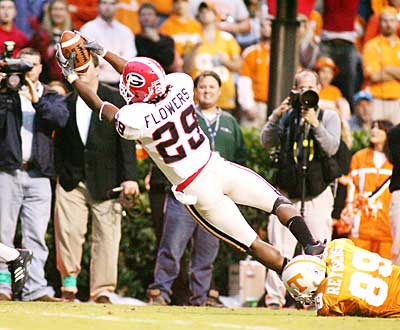 Oh, my. Oh, yes, I think that was so good, I may need a cigarette now.

The only criticism I'm going to make, and it's a pretty picayune one, is I wish we hadn't allowed that last who-cares touchdown to the Vols at the very end of the game (especially since from some angles it looks like the UT receiver's knee was down short of the goal line). I don't know, it just seems like 27-7 is a lot more impressive than 27-14. But the ESPN commentators I was watching this morning seem to have recognized that, for all intents and purposes, our defense basically shut the Vols out until it was too late, so that's the last I'm going to say about that.

Everything else about the game was beautiful. And I'm sure some Dawg fans are going to bitch that it was an ugly victory and our offense didn't actually look that good, but you know what? Our offense was actually pretty freakin' great when you actually stop to think about it. We gouged one of the nation's best D-lines for nearly 200 rushing yards, and though D.J. Shockley may not have had a Heisman-clinching game statistically, he sure did look like a cool-headed -- dare I say David-Greene-like? -- field marshal in one of the most challenging venues in college football. Even when he f'ed up and turned the ball over, he'd come right back out on the next series and perform like it never happened. Other than maybe Brodie Croyle, who's got durability issues, name me another quarterback in the SEC you'd rather have than Deej right now (and no, "I'd build a time machine and go back to 1997 and kidnap Peyton Manning" is not an acceptable answer).

Plus, I like the fact that, while we do have a very talented offense, we're not dependent on it to win every time; I like the fact that we have a tough, snarling, blue-collar, old-school D that will keep us from ever being damned with the backhanded compliment of "finesse team." I suppose there are worse things than winning every game in a 48-45 shootout, but that's what we have a Pac-10 for. This is the SEC, and I'm proud to have a team that can stand up, look just about any opponent in the eye, absorb a Mike Tyson punch to the gut (if one is forthcoming) and come right back with one ten times worse.

Now, I don't want to come off as too cocky here, because if there's one thing you can count on from the Bulldogs, it's following up a hard-fought, emotional, season-making win with a real stinker of a performance. So I won't be the least bit surprised if we go up to Vanderbilt this weekend and wind up tied with the Commodores heading into the fourth quarter. (I'm really not trying to be a Negative Nancy here -- I'm just saying, if you're thinking of taking Georgia minus the points, you might as well just wipe your ass with a $100 bill and then set it on fire.) But until then, sic 'em, baby.

By the way, I would be remiss if I did not rehash this bit of brilliance from homey DAve's season preview from a few weeks ago:

I just don't get the hype surrounding the Vomited-Carrot Orange this year. Refer to football rule number two: If you're one week from the opening of the season and STILL not sure who your starting quarterback will be, you're in more trouble than you think. Yes, they'll have probably the 2nd-best running game/O-line in the conference, but UT won't be able to extract victory from their collective rectums like they did last year. And that Neyland Stadium home-field advantage? Not as important as it used to be my friends. A big special teams play (remember Damien Gary in the 2001 "P-44" game? Most people don't.) helps the Dawgs squeak one out.

Dawgs win a razor-thin close one. Maybe. Player of the game: Thomas Flowers.

Let the record show that Thomas Flowers broke the game open with his 54-yard punt return in the fourth quarter (the six-point culmination of which is pictured above). DAve is probably too humble to take the proper credit for this, although he's up in Knoxville right now and it'll probably be at least Wednesday before he's fully conscious, so we may never know for sure.

As the person sitting next to DAve in Neyland, let me report that he was NOT humble. In fact, the words "I had Thomas Flowers named as the Player of the game in my blog!" escaped his lips no less than 150 times in the hour after the game.

I have no idea why I haven't been to your site more often. But anyone that can drop the line "I know Leonard Pope, by the way. Eight-foot-two, 960 pounds, can palm a medicine ball? I heard he once ate the Bible while water-skiing." Demands respect.

I'm pretty up on my Brasky material, but that's comedy gold.

Not sure if you know this or not, but Leonard Pope is the original founder of Disney World Toronto. He built it in the 8th grade as a class project. What else can you say?

BTW -- Did I ever tell you how Leonard Pope would put on a white tie and tails and walk his cobra through the park on a leash. He named the cobra Beverly, and he taught it how to fetch and dial a phone. But then one day it bit his maid. So with tears in his eyes, Leonard had to shoot the maid. Leonard Pope. Helluva guy.

I can't take credit for the eating-the-bible line 'cause I think that one was actually used in one of the Brasky sketches on "SNL," but I'll try my hand at an original: Instead of sweat, Leonard Pope secretes grain alcohol so strong it's illegal in 37 states. And the District of Columbia! Why, I once saw him catch a Stinger missile bare-handed. He bent it into the shape of a horsey and presented it to a little girl, and damned if her cancer wasn't cured the next day!

That's nothing. While ghostwriting "The Pirates of Penzance," Leonard Pope peered out of his Tuscany villa to see a car on fire. With one word, ("Muad'Dib"), Pope made it snow and put the fire out. It turned out there was a child in the backseat. Pope presented the child with a stuffed tiger, art pencils, and a box full of dreams. That child? Bill Watterson.