The Friday (Saturday?) Random Ten+5 throws out some prognostications.

My apologies for the Friday Random Ten+5 getting pushed back a good 24 hours -- unexplained molasses in my Internet connection have prevented me from getting just about anything done during that time, but the problem seems to have been (mostly) alleviated. So I thought I'd toss out some predictions involving varying degrees of ballsiness about the 2010 football season. Only one of them has to do with the Bulldogs, mind, and nearly all of them are pulled straight out of my ass, but hey, if that's not what the preseason is for, then what, I ask you, is it for? Anyway, here's the +5 for this last Friday before the glorious dawning of another season -- Five Random-Ass Predictions About College Football in 2010: 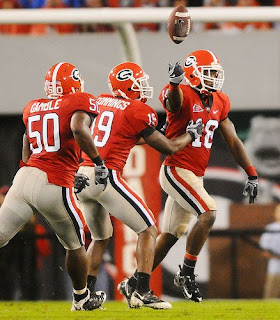 The Georgia secondary will key noticeable statistical improvement by the Georgia defense.
Look, let's not beat around the bush here -- going from a 4-3 front to a 3-4 is not an overnight project, and the Bulldog defense is going to struggle this year. But by the end of the season I think we'll feel pretty confident about the direction in which Todd Grantham has us pointed, and I think a big part of that is going to be our pass defense, of all things. The more I hear about Scott Lakatos, the more I like him -- he did an excellent job at UConn with nowhere near the kind of blue-chip talent we have access to down here -- and if nothing else, he seems to have completely replaced Willie Martinez's philosophy of "If you're a senior, you start, regardless of whether you have any idea what you're doing" with the revolutionary idea that the better players play. And we've got some good ones -- Bacarri Rambo and Brandon Boykin both looked good last season, and Vance Cuff and Sanders Commings are two guys I'm also very excited about. It's been a long time since our pass defense didn't give acid reflux to entire stadiums full of people, but I think Lakatos has us on the way back. 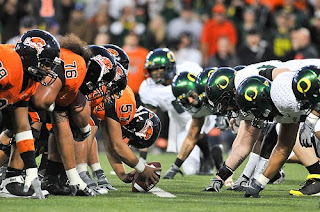 The game of the year will be the "Civil War" -- Oregon vs. Oregon State for a trip to the Rose Bowl.
With the USC dynasty apparently over and Oregon coming off a rather tumultuous offseason, there are no invincible teams in the Pac-10 this year, and the race for the conference title should be very interesting. I don't think it'll be decided until the very last weekend of the regular season, when Oregon and Oregon State play in Corvallis with the winner taking all. OSU seems to be mostly flying underneath the radar this year, but they've got a ton of returning talent and have, I'm told, one of the Pac-10's scarier home-field advantages. I had the Beavers at #16 in my preseason BlogPoll ballot and wouldn't be surprised to see them higher than that in the mainstream polls by the time bowl invites are handed out. 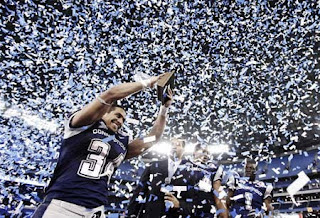 Boise State and UConn will go to BCS bowls; USC and Texas won't.
Boise State, I think, could get there even if they lose to Virginia Tech -- they're ranked high enough in the preseason, and the VT game is early enough, that they've got plenty of time to work their way back into the top 10 -- and I'm more convinced every day that UConn is going to come out of basically nowhere to win the Big East this year. As for USC, I just don't get why so many people are ranking them as the favorite to win the Pac-10 title again. Sure, pound for pound they may be the most talented team in the Pac-10 on paper, but they probably were last year, too, and all it got them was an 8-4 regular-season record and a trip to something that is now called the Kraft Fight Hunger Bowl -- and that was with Pete Carroll. You really think Kiffykins is a money bet to do any better? After the off-season they've had? As for Texas, I think they'll be fine on defense, but first-year starting QB (even if he is incredibly talented) plus big questions on the O-line plus a running game that's been non-existent for two years now equals a team that may be counting its blessings just to get back to the Holiday Bowl. I think they'll be right back in the thick of the title hunt next year, but 2010 is gonna require some rebuilding.

Added: Have been reminded that USC is under a bowl ban for the next two seasons. So, uh . . . hey! I got one right already! [smiles nervously, slinks awkwardly off stage] 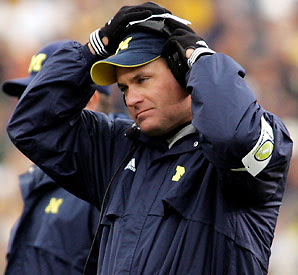 The postseason firings will be less notable for who gets fired (Brewster, Zook, Friedgen) than who doesn't (Rodriguez, Hawkins, Price).
As I explained in the "Hot Seat" post I did on Rich Rodriguez earlier this summer for Dr. Saturday, Michigan is one of the few remaining programs in the country that looks for reasons not to fire a head coach, and if Rodriguez can just squeeze the Wolverines back into a bowl (which I think he will) he'll get enough of a vote of confidence to last another year. Hawkins, too, stands a good chance of getting Colorado back into a bowl this season, and CU's decision to delay their entry into the Pac-10 until 2012 may have earned him some extra time (though if he goes 4-8 next season, they'll waste no time unloading him so that they can get a fresh start in their new conference). Price, meanwhile, is a guy who appears to be well-liked enough in El Paso that he might be able to survive even another 5-7 season (though I think UTEP gets back into a bowl this year, too).

Hottest seats heading into 2011: Les Miles, who I think is poised for a mediocre year in Baton Rouge that will more than likely initiate the tried-and-true assistant housecleaning in the offseason; Mike Gundy, who has the fewest returning starters in the country this season and has already been the target of grumbling from T. Boone Pickens; and Butch Davis, who could also be headed for a disappointing season and has the added pressure of a player-eligiblity scandal that seems to be building by the day. 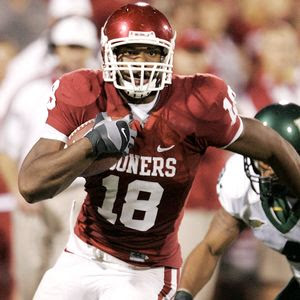 Alabama and Oklahoma will face off for the national title.
Not a very outside-the-box pick, I know, but I think Bama will weather their defensive rebuilding a lot better than some people seem to think. Meanwhile, Oklahoma -- while I don't think they're a better team than Ohio State, at least on paper -- will have the advantage of an easier schedule; a late-season loss to Wisconsin, Penn State, or Iowa will put the Buckeyes just far enough back that they miss out on a title shot. Their disappointment, however, will be nothing compared to that of Boise State fans, who will watch their team go undefeated for the fourth time in five regular seasons but still get boxed out of the national-title game. (At which point Orrin Hatch will demand immediate Congressional action, perhaps even involving impeachment hearings.)

Now watch as none of these five things turn out to have been accurate by the end of the season. But until then, the Ten:

Apologies again for the lateness of this week's Ten+5 -- feel free to regale us all with your own predictions for the upcoming season, and Random Tens, in the comments.
Posted by Astronaut Mike Dexter at 6:42 PM

Sussudio is an awesome song!