It's great! To be! An American Georgia Bulldog of Slovak descent! 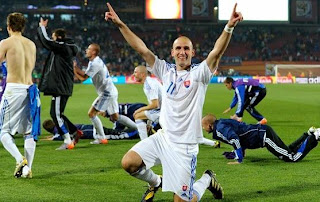 · Team USA advance to the knockout round of the World Cup -- winning their group, no less -- on one of the more thrilling goals that's ever been scored;

· Slovakia, in its first World Cup as an independent nation, advance to the knockout round via an amazing 3-2 victory over the defending world champions -- in the process sending the loathsome, preening, flop-artist Italians home in disgrace.

I didn't know it was possible to be this happy so far away from football season.
Posted by Astronaut Mike Dexter at 7:04 PM

We offer the farouk chi flat iron. We provide the best price and free shipping for all the
chi flat iron. As we know, the
ghd iv styler is the first class and famous brand. So it is the good chance for you. Don't let it pass. If you are looking for the
babyliss flat iron, you have come to the right place for
instyler rotating hot iron.