And I'm proud to be an American, where at least I know I'm going to the knockout round. 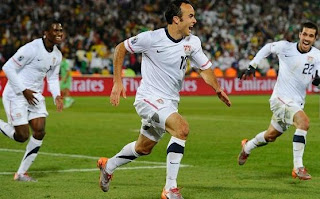 Though I have next to zero interest in soccer generally, I've always gotten really excited about the World Cup, because it's sort of like an Olympics for one sport: People from all over the world come together in one place to (mostly) put aside political differences and compete not with guns and bombs but with sheer athletic prowess, and some people win and some people lose, but the hope is that everyone does so with a real love for the whole idea of competition and a respect for sportsmanship. (Well, except for the French maybe, but you never know what you're gonna get from them.)

Sitting there in my cube, though, surreptitiously checking the action on the FIFA MatchCast and being less and less slick about it as the game wore on and got increasingly tense, I was reminded not of any specific Olympic memory but of the 2006 Georgia-Georgia Tech game. An agonizing defensive struggle, packed with numerous great plays but an even greater number of missed opportunities, and it looks like the good guys are going to be hanging their heads right up until the last minute, when a talented but maligned player goes in for an amazing score.

It even felt the same way to be watching it: Just like in 2006, I was away from the actual action, keeping track of it on a few seconds' delay -- but there was a group of people watching the game on one of the big-screens on the opposite side of our floor, and in the 91st minute of the match I heard a huge cheer go up from that side of the building. Just as I'd heard a huge cheer when the Americans knocked in their disallowed goal in the first half, and just as I'd heard a huge cheer go up from Sanford Stadium, right down the street from our tailgate spot, when Staffy hit Massaquoi for that TD pass. Wait a few seconds, and then boom, the little soccer-ball icon popped up signaling Donovan's goal, and it was party time for the rest of the day. (Yeah, it was a weird way to be watching the game, but let's be honest, it wasn't like I would've understood the game of soccer any better had I been watching the action unfold on TV right in front of me.)

So congratulations, Team USA. And everyone say a prayer for similar miracles today for Slovakia, who need a win over Italy to have any hope of following the U.S. into the knockout stage. 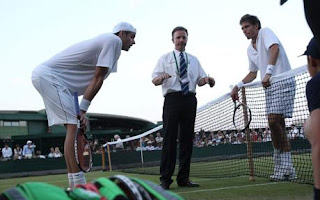 And actually, while you're at it, say a prayer for American tennis player and damn good Dawg John Isner, who will be resuming the longest tennis match in history at some point later on today. If I weren't pulling for Isner so hard, I'd say just let him and Nicholas Mahut both advance to the next round and take on their opponent two-on-one -- it almost seems unfair to make someone lose at this point, and besides, after playing seven hours of tennis yesterday they probably only have enough combined physical stamina left to equal that of one healthy player (if that much). But Bulldog Nation's pulling for you, John -- just keep acing those serves, and stay hydrated, for God's sake.
Posted by Astronaut Mike Dexter at 7:05 AM

I have been pretty much glued to espn3.com at my desk for the last 12 days. Try that out, really smooth live feed.

We offer the farouk chi flat iron. We provide the best price and free shipping for all the
chi flat iron. As we know, the
ghd iv styler is the first class and famous brand. So it is the good chance for you. Don't let it pass. If you are looking for the
babyliss flat iron, you have come to the right place for
instyler rotating hot iron.