Fool me once, shame on you, etc.

Saturday while I was driving around running errands there was a story on one of NPR's financial programs about how a new round of banking regulations are kicking in next month, and banks offering "overdraft protection" -- i.e. a service whereby they'll cover an ATM withdrawal or point-of-purchase debit sale that would technically overdraw your account, for a fee -- will have to allow customers to opt in or out of such an amenity. Sounds fair to me: Back when I was young and irresponsible -- you know, a couple years ago -- I would do something dumb like go to the grocery store the day before my next paycheck was supposed to clear and buy a twelve-pack with what I thought were the last twelve or fifteen bucks in my checking account, only to find that it was actually more like my last seven or eight bucks, and my account was technically overdrawn, and my bank was going to charge me an additional thirty-five bucks for covering the purchase I otherwise wouldn't have been allowed to make. Now, you can blame irresponsible bookkeeping on my part, and you wouldn't be wrong, but still, had I known that in exchange for avoiding an embarrassing rejection at the checkout counter, I was going to end up buying a $47 twelver of beer, I might've declined that little feature.

Well, now my bank has to give me the option to do so, which I fully intend to do -- and here, incidentally, is what I found on the home page of my bank when I logged on to check up on some recent transactions this morning: 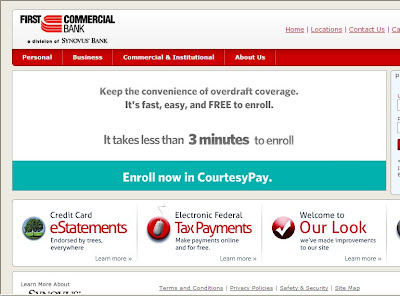 Ah, yes! That overdraft coverage, which is so awesomely convenient! Whose enrollment is fast, easy, and free (except for the $35 or whatever they have to pay if they actually buy something too rich for what's in their account)!

Look, I'm not stupid -- I know the real lesson here is don't spend money you don't have. (Getting smacked with overdraft fees is one way of learning this. Burying oneself under ~$15,000 of credit-card debt within a few years of graduating from college is an even better one.) But it seems like the old version of automatic overdraft protection encourages people to spend money they don't have, and like all those supposedly wonderful credit cards we gorged ourselves on in the '90s and early 2000s, which let us spend spend spend until we realized they'd snuck a bunch of arbitrary interest-rate hikes into the fine print, it lures us into thinking we can spend without consequence -- at least until the nasty surprise of a rate hike or overdraft charge smacks us in the face once we turn the corner.

Banks bitched and moaned about this rule change before it got passed. Me, I like having the option of turning down something that looks too good to be true. Hey, I don't have a problem with someone trying to profit off of the stupidity and/or irresponsibility of the American consumer -- lord knows that's a growth industry these days, and one of the few we have left -- but they should at least be honest about it.
Posted by Astronaut Mike Dexter at 5:30 PM

Email ThisBlogThis!Share to TwitterShare to FacebookShare to Pinterest
Labels: my sordid personal affairs, teh suxxorz, you kids get off my lawn

Not to change the subject, but you need this: