Like I said yesterday, the past 48 hours or so -- thrilling wins by the U.S. and Slovak soccer teams, a match to end all tennis matches won by Georgia alum John Isner -- have been about the happiest that sports have ever made me outside of the four or five glorious months we call "football season." It's true that most of my awesome sports-related memories are intimately tied with some great success on the part of the Bulldogs -- or the Washington Redskins, in the pre-Snyder era when they still had successes -- but I've been privy to some pretty amazing non-football achievements that made my heart swell with pride to be an American, a Georgia fan, or perhaps just someone who happened to have a TV and a cable connection and be in the right place at the right time. This +5 is dedicated to the heroes who made me snap out of my pigskin-and-beer-induced trance and made me realize that there are other sports in the world, not an easy thing to do in and of itself: My Five Proudest Sporting-Related Memories That Had Nothing To Do With Football. 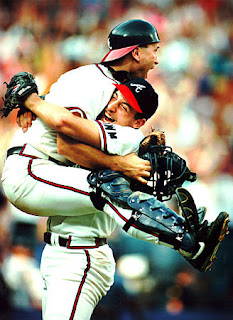 October 5, 1991: Braves claim their first division pennant in nine years
Confession: While I'm a ripe old 32, I'm not one of those Atlanta-area Gen-Xers with massive archives of miserable memories about how bad the Braves were in the '80s. We didn't move to Georgia until the summer of '91, right before I started high school, and I don't have many memories of paying attention to baseball period before that. But not long after we moved down to Columbus, my dad had some sort of job-related doctor thing up in Atlanta that included tickets to a Braves game, so off we went to Fulton County Stadium. The Braves were leading the NL West for the first time in forever, but only a game ahead of the Dodgers, with two games to go in the season; we got to watch Smoltzie pitch a complete game of pure ruthless efficiency, downing the Astros 5-2, then hung around while they showed the Dodgers-Giants game on the Jumbotron. I don't think a single person left the stadium as the LA-SF game wore on, and when the Giants corralled LA's final groundout to clinch their own 4-0 win, the place exploded even louder than it had when the Braves had won. A photographer took our picture as we walked triumphantly back to our car, and somewhere, in some newspaper's dusty archives, there's a picture of little 13-year-old me with the foam tomahawk someone had handed me on my way into the stadium, waving that thing like I'd caught the winning out myself. 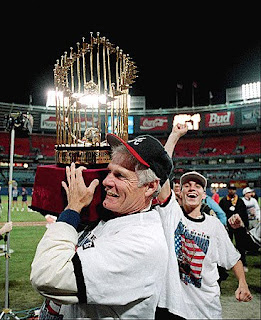 October 28, 1995: Braves win the World Series
It took another four years before the Braves won the Big One, of course, but I remember exactly where I was when it happened: in the TV lounge of the lobby at Oglethorpe House my freshman year at UGA, surrounded by pretty much every single one of my neighbors, watching I think it was Marquis Grissom tear across left-center to catch the final out. When it finally happened, when all those years of disappointments and achingly close missed opportunities gave way to a Series title, the entire room poured out and I remember spending the rest of that evening engaging in copious amounts of underage drinking whilst wearing my Braves boxers on the outside of my clothes. Good times. 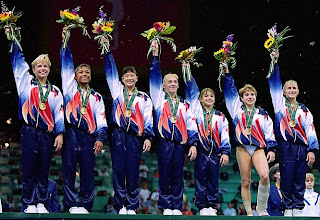 July 23, 1996: Kerri Strug vaults on a bum ankle and wins the gold for the American gymnastics team
We caught a couple of events when the Olympics were in Atlanta, but we watched the team gymnastics competition from home, and saw the whole drama with Kerri Strug's ankle and the one last vault she did to clinch the all-around team gold for the U.S. for the first time ever. Considering that she had to be taken straight from the Georgia Dome to a hospital afterward to be treated for tendon damage, I think Strug's hero status was well-deserved, as were her "Saturday Night Live" cameo and appearance in one of the funnier spots from the golden age of "This is SportsCenter" ads. 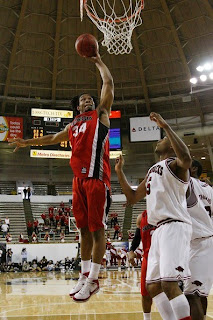 March 16, 2008: Georgia wins the SEC basketball tournament
I don't have the clearest memory of where I was when this went down: I think I'd driven home from Birmingham to Columbus that Friday night -- through a hellacious thunderstorm, of course -- and woke up the next morning fully expecting to open up the Ledger-Enquirer sports section and read about how the Dawgs had been unceremoniously bounced out of the tournament in the second round by Kentucky. Instead, I got to read about how the second-round game hadn't even been played because of a tornado that tore through downtown Atlanta -- ripping a hole in the roof of the Georgia Dome in the process. So I got to watch two games on Saturday -- the first a Georgia victory over Kentucky (their second straight overtime win), followed just hours later by an equally improbable win over Mississippi State. Keep in mind that, in the most delicious irony of ironies, this all happened on Georgia Tech's basketball court, where the entire tournament had been moved because of the damage to the Dome. And the following afternoon, the Dawgs -- who'd been the sixth seed in the East at 4-12 in the SEC, 13-16 overall -- knocked off Arkansas to claim one of the least probable NCAA tournament berths ever. They lost in the first round to Xavier, of course, and less than a year later Dennis Felton was out of a job, but still, this was one of those miraculous weekends that could bring a glimmer of pride to even the most beleaguered program. (Of course, now that Mark Fox is in charge and recruiting like a madman, the Hoop Dawgs are gonna win so many of these things that the fan base gets bored and starts taking them for granted like asshole Kentucky fans. Book it.) 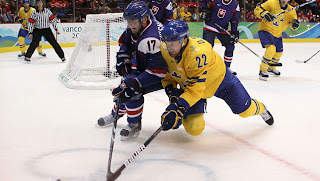 February 24, 2010: Slovakia beats Sweden in ice hockey to advance to the medal round of the 2010 Olympics
Just like I really get into the World Cup despite not being much of a soccer fan, I like Olympic hockey even though I don't follow the sport much otherwise. And with the NHL being littered with bad-ass Slovaks, I figured the motherland had a great chance at a medal in Vancouver (after having smoked the rest of their group in the first round in 2006 but getting bounced by the Czech Republic in the first round of the knockout stage). SVK began the 2010 hockey tournament by getting whacked again by the Czechs, but then stunned the world with a shootout win over the Russians, and closed out group play by pounding Latvia 6-0. They dispensed with Norway in the first round of the playoff, but that only meant they'd earned the right to face Sweden, the defending Olympic champions, in the next round. Instead of folding, though, the Slovaks scored on a power play in the second period and never trailed from there, and my boys were headed to the medal round for the first time ever as an independent country. (About that: Yeah, there was no medal. Not this time. But it's happening four years from now, oh yes it is.)

Ahh, memories. And now the Ten:

Your turn -- your Random Tens and/or favorite non-football sporting memories go in the comments, if you're so inclined.
Posted by Astronaut Mike Dexter at 7:51 AM

My hatred for the Yankees & Lakers abounds, and several would have to be the moments of great failure for these storied franchises:

2004 NBA Finals, Detroit Pistons def. LA Lakers
This one was such a thing of beauty for a lot of reasons. First, the Lakers are not only my least favorite team, but Karl Malone is my all-time least favorite athlete ever and he had signed a one-year tender with LA to keep himself out of Marino territory and bring home a ring. Not to be Karl, not to be. Another objectionable veteran, Gary Payton was on that team, and while I will always love Shaq, the pure unmitigated joy of watching Malone, Payton, Rick Fox, Devean George and most of all Kobe "America forgot I'm a rapist" Bryant fail in such epic fashion was just pure joy.

2001 World Series, Arizona D-Backs (dangerously close to D-bags) def. NY Yankees
Game 7 in AZ. Everyone thought AZ had no chance. After starting Schilling & Randy Johnson each in 2 games on 3 days rest, they bring Johnson in in relief and in the bottom of the ninth Luis Gonzales hits a bloop single off Mariano Rivera to score Jay Bell and crush the Yanks hopes of another title. Best World Series ever that the Braves didn't win.

As a Braves fan of the 90's, I can't stand the Yankees. I know they don't care about us at all, but I constantly hope for an epic collapse up in New York. Kind of like how I use to poke my Kirby Puckett voodoo doll (too soon?) any time I heard an air conditioning vent go on.