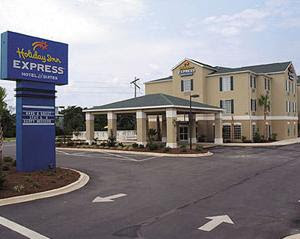 SCENE: The free breakfast bar at a Holiday Inn in Destin, Florida. Florida head coach URBAN MEYER and Alabama head coach NICK SABAN are hunched over plates of bacon and eggs and appear to be deep in conversation.

SABAN: . . . So I'm standing there, taking a leak behind the Chevron, when who pulls up but John Q. Law. He gets out of his cruiser, kind of stands there tapping his foot, and then I hear the son of a bitch clear his throat. Pardon me, but I've got my dick in my hand, I'm lettin' it rip, what the fuck am I supposed to do? I'll take the ticket, whatever -- you can't give me ten seconds to finish my business?

MEYER: I wear a Stadium Buddy when I'm out recruiting. Never have to stop even for a second.

SABAN: Well congratulations, Urban, you're a fucking genius. Can I finish my story? --

Presently LSU head coach LES MILES staggers up, everpresent hat towering atop his head, a coffee-filled 64-ounce cooler mug from QuikTrip in his hand. He takes a long, mouth-searing swig and unloads himself into a chair at SABAN's table.

SABAN: Jesus, Miles, what the hell happened to you?

MILES: Honestly? I got no fuckin' clue. Last thing I remember is doing shots of tequila at this Chinese buffet out by the outlet malls, next thing I know I'm waking up in the crawlspace of someone's --

MILES reaches in his pocket and pulls out a set of Volvo keys.

MILES: Son of a bitch, whose keys are these?!

While MILES tries to piece together his night, Arkansas head coach BOBBY PETRINO strolls over to the table carrying a plate loaded with fruit and bacon.

MEYER: Can I see your ring?

PETRINO: My what, now?

MEYER: Your ring, Petrino. This table's only for guys who're sporting national-championship rings.

PETRINO: (looks at his free hand) Well, I've got an Orange Bowl ring and a Conference USA --

SABAN: And I'm sure all the other stockboys at Wal-Mart will be very impressed. Have a seat over there.

PETRINO: (walking away angrily) You guys think you're such hot shit. Well, let's see you talk that way to me when I'm the coach at Notre Dame.

SABAN: (under his breath) Get in line, dickweed. (to MILES) Do you know you reek of stale booze? 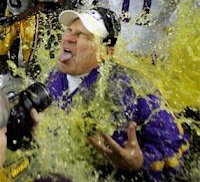 MILES: No shit, that little trollop sprayed champagne all over -- THAT'S whose keys these are! The stripper, the one with the glasses! Had that "intellectual" thing going on, so of course she'd drive a --

SABAN: Terrific. Get ready for two more hours of tales from the '97 Sugar Bowl.

MEYER: So tired of hearing his bullshit war stories -- did I tell you he made me address him as "Ol' Ballcoach" on the golf course the other day? I've won twice as many national titles as he has, who the fuck is he to tell me how to -- Steve! What's happening.

MEYER: Uh, Nick was just telling me about a run-in he had with the cops when he was trying to relieve himself behind a --

SPURRIER: Boy, I'll tell you, I never came closer to getting arrested for public urination than when I really had to go during the '97 Sugar Bowl. And this was during the second quarter, before we really started pouring it on 'em, so there was no way I could possibly --

SPURRIER: (whirls around suddenly) NATIONAL CHAMPIONS ONLY, RICHT! You just keep on walkin'!

RICHT: No problem, fellas, I was just gonna take my breakfast on over here and introduce myself to Coach Mullen. Y'all have a blessed day.

MEYER: Kinda took the wind out of your sails, didn't he, Steve?

SPURRIER: That's Ol' Ballcoach, Meyer, and I'll have you know --

RICHT: Say, fellas, you don't suppose I could borrow y'all's pepper shaker, do you?

SPURRIER: PEPPER IS FOR TITLE WINNERS! 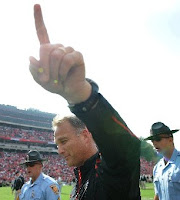 RICHT: No problem, I'll just see if I can borrow Petrino's.

SPURRIER: (still unsatisfied) Hey, Richt, how's your offense coming together? Gonna be real hard to score points without Stafford and Moreno, won't it?

RICHT: Boy, you're right about that one, Ballcoach. I reckon we'll just end up in some low-scoring defensive struggles and beat you guys 14-7 like we usually do.

RICHT heads off toward PETRINO's table. The frustration is evident on SPURRIER's face.

SPURRIER: Man, I'm so tired of these new kids coming in here and acting like they own the place. Fulmer was a big dumb ape, but at least he'd paid his dues. He'd earned the right to talk some trash. Nowadays, you see some new coach come in, he ain't even finished his first season and already he's actin' like he's got the right to --

SPURRIER: (ignoring him) Just sayin', things aren't like they were 10, 15 years ago -- y'all remember '96? Year I won the national title? Jim Donnan came in there actin' like he was gonna turn Georgia into a powerhouse, well, I showed him real quick who the sheriff was in this town. Beat him by 40, and he was lucky it wasn't worse . . .

SPURRIER doesn't notice sunglass-clad TENNESSEE head coach LANE KIFFIN striding up behind him, carrying a tall glass of orange juice with a Crazy Straw coming out of it. KIFFIN smacks SPURRIER on the back as hard as he can.

KIFFIN: 'Sup, niggas! I don't know about you guys, but I am ready to hit that beach!

KIFFIN: (sits down) Oh, dude, I meant to tell you, Lance Thompson said to tell you hey. Bet you're missing him right now, huh?

SABAN: Don't you have some traffic to go run out in front of?

KIFFIN: And Urban, I wanted to tell you again, I am sorry about that whole "cheating" accusation, man. Seriously, you just do your thing, man, it's working for you. I mean, you cheat all you want as far as I'm concerned -- long as you're not very good at it, no skin off my ass, right? What's up, my man!

KIFFIN holds his hand up for a high-five from MEYER, which the Florida coach pointedly refuses.

KIFFIN: Whoo! Haven't seen a crowd this tough since my last employee evaluation with Al Davis.

SPURRIER: Since you're new here, I guess you might not have been aware that this table is reserved for national title winners.

KIFFIN: Way ahead of you, broseph. Check it!

MILES: "Passing game coordinator"? What in the good cow-tipping fuck is that?

SPURRIER: Tell you what, Kiff, when you do something with the Volunteers other than embarrass your daddy, maybe we'll let you sit at the big boys' table. 'Till then . . .

KIFFIN: (getting up) Hey, no, man, that's cool, that's cool. Hey, incidentally, I got a message for you, too: Blake Mitchell said to tell you "what's up."

SPURRIER: Blake Mitchell? Where'd you run into him?

KIFFIN: Pumped my gas at the Shell station in Columbus, homes! Heyyyooo! Said he couldn't wait for Kenny McKinley to get down there and join him!

SPURRIER: (getting angry) That's pretty big talk for a kid who can't even get a meal in Pahokee, Florida, these days.

KIFFIN: Whatever, dude, they love them some Kiffin down there.

SPURRIER: Is that right? I bet you don't recruit another kid from that high school before "Monte Knox" is old enough to drive.

KIFFIN: Whoa, bro-ham, you better not bring my family into this.

KIFFIN stares SPURRIER down as he takes a long, serious sip from his Crazy Straw.

SPURRIER: Yeah, what're you gonna do about it, bowwaahhh?

At that moment SEC commissioner MIKE SLIVE appears at the table with a cup of yogurt. He does not look pleased with the scene before him, and all the other coaches snap upright in their chairs the minute they see him.

SLIVE: Is there a problem over here, gentlemen?

KIFFIN: No, no problem at all, Mr. Commish, sir. Me and the Ol' Ballcoach were just messin' with each other, that's all --

SLIVE: I see. Well, Mr. Kiffin, take care that you don't "mess with each other" so much that you violate the rule I laid down the other day about not criticizing one another in a public forum. I would hate to have to cut into those nice hefty paychecks you're all getting. (pause) Am I clear?

SLIVE walks off without a sound. All the coaches breathe audible sighs of relief as he goes, except for KIFFIN, who breaks into barely stifled giggles.

MILES, SABAN, MEYER, and SPURRIER return wordlessly to their respective breakfasts. KIFFIN finally gets the hint.

KIFFIN: Well, I guess I'm gonna go kick it with my main man Nutt for a while -- think I saw him down by the hot tub with a couple Hooters waitresses . . .

KIFFIN gets up to leave.

KIFFIN: What? Man, speak up or clear your throat or something, I can't hear you.

KIFFIN shrugs, takes another sip from his Crazy Straw, and wanders out to the pool. SPURRIER leans back in his chair and smiles.

SABAN: (rolls his eyes) As always, Steve, you are.

THE END
Posted by Astronaut Mike Dexter at 7:55 AM

Awesome. I hope that's actually what happens at these things, crazy straw and all.

Seriously, your best work in quite some time. I could even see Drew from "Office Space" as The Kiffer.

Good stuff, good stuff. You know I was sad to see Fat Phil go- he was so much fun to hate. Good on the Vols for finding someone who might actually be easier to hate on. The crazy straw was a nice touch.

Doug that is a class a gem-(which you know is the best gem). Thanks, really needed a laugh this morning.

You just saved me from my hangover. I've wallowed in my misery all day, but this owned me. Even as a Tennessee fan, I was giggling at the Kiffin stuff!

hello... you may submit this blog to my webBlog Directory, keyworddir.info.. have a nice day!

jeezus that was funny.

hee-hee-larious! No, seriously--and don't let anyone tell you different--this is a good use of your time.

Superb, Doug. I love that we knew Kiffin' was coming, but you held him back for just a bit. Really great.

This read had me rollin...funny stuff and good job!

Anything but Gatorade said...

Likin' it. Could have used some Rich Brooks, Metamucil and Grape Nuts, but it was good.

Couldn't stop laughing at "faggotsaywhat?" too good. too good.

Dr. Clarkus approves of his message.

SUPER that was the greatest, but I want to know what happen when Pete Carroll walked in?