We're just shy of the halfway point in the 2008 college football season, which means everyone's had a chance to take stock of their own team (as well as plenty of other people's) and get a read on their chances for a decent bowl game or even a conference title. Obviously some people are going to be happier with that read than others, but that's one of the reasons why we have these roundtables among Power Poll voters -- to see who's feeling good about themselves and who's already lunging for the Pepto. At the moment, I'm doing a little bit of both. 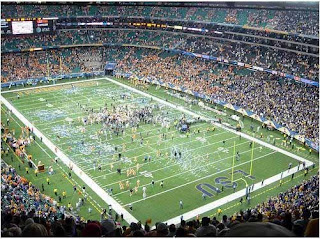 1. What's your prediction for the matchup in the SEC championship game, and has that changed at all from what you were predicting in the preseason?

LSU was my pick to represent the West in the preseason, but having had a very up-close and acute experience with the Crimson Tide a couple weeks ago, I'm reasonably confident in switching that pick to Alabama. The Tide aren't a perfect team, and they're certainly no less prone to a post-big-win loss of focus than anyone else, but they're the most complete team in the conference, at least at the starting positions, and have the strongest body of work so far. I wouldn't put it past Les Miles to somehow engineer a big upset in Baton Rouge, though; either way, Bama-LSU is starting to look like the best conference game of the year.

In the east, Georgia's still my pick, though that has more to do with the struggles of some of their main division rivals than it does with any huge achievement they've accomplished on their own. And even with Tennessee struggling and Florida working out some unexpected kinks on both sides of the ball, an SEC East title is hardly a done deal for UGA; the Alabama game showed that "send 'em out there and pray" really isn't a productive solution for the ongoing personnel issues on both the offensive and defensive lines. The O-line, in particular, has a lot to prove with some very scary defensive fronts looming on the schedule. Whoever represents the East Division in December, I don't see that team being favored over either Alabama or LSU.

2. Knowing what you now know about your team, how have your expectations for this season changed? What would constitute a successful season in your eyes, and what would be a disappointment?

Again, with Georgia's weaknesses on both lines having been demonstrated to be rather more serious than we thought, it's a lot harder for me to see the Dawgs as a serious national-title contender now than I did in the preseason. A BCS bowl isn't out of the question, but there might be one or even two more losses waiting down the road for the Dawgs if the offensive-line situation doesn't improve. With that in mind, I think a bid to the Capital One or even the Cotton Bowl would be a decent reward at the end of the season, but anything lower than that would be kind of a bummer. No offense to any of my Badger readers, but I think I speak for a lot of Dawg fans when I say we don't want to play Wisconsin in another freaking Outback Bowl. 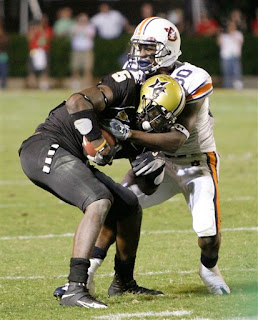 3. If your team has Vanderbilt coming up at some point on its schedule, are you worried? If not, which team should be the most worried?

Uh, yeah, I'm a little worried. As we heard so many times in the lead-up to the Vandy-Auburn game last week, the Commodores are #1 with a bullet in turnover margin, currently leading the country at +9; Georgia has been pretty good about avoiding turnovers, coughing up the ball only four times in five games. However, Vandy has been extremely dangerous on offense when handed favorable field position, and giving opposing teams a head-start on offense is something Georgia has had a problem with. We're still not dropping kickoffs consistently in the end zone, which doesn't bode well against a Vanderbilt team averaging 20.5 yards per KO return; the 'Dores are also 10th in the country in punt returns with an average of 19.4 yards. I'm a little comforted by the fact that Vandy's offense is still so one-dimensional -- their passing offense is still languishing at 116th in the nation -- but that obviously hasn't hurt them too badly yet. And given that the Commodores scored a shocking upset the last time they came to Athens, I don't envision them feeling all that intimidated when they march into Sanford Stadium on the 17th.

4. Other than perhaps Alabama's season-opening win over Clemson, the SEC doesn't really have any marquee non-conference wins thus far, and a couple of traditional powers (Auburn and Tennessee) are struggling in high-profile fashion. Is it too early to call this a "down year" for the conference?

"Down year" is a relative term, of course, and I dare say the ACC, Big East, and maybe even the Pac-10 might still be a little jealous of the SEC's depth right about now. But I don't think the conference as a whole is as strong, top-to-bottom, as it was last year. In 2007 you had a pair of elite teams, three or four that were a small step down from "elite," and only one real bottom-feeder, Ole Miss; this year we've got two really bad teams at the bottom of the conference, and the drop-off from "semi-elite" to the middle-of-the-pack muddle is, I think, bigger than it was a year ago.

But I think the SEC still has a reasonable claim to "best conference in D-IA" status, with the Big 12 also having a pretty strong case to make, and there's a big drop-off from those two "superconferences" to the Big 10 and Pac-10. It wouldn't surprise me at all to see the SEC and Big 12 champions matched up in the national-title game, though of course the Trojans will have something to say about that.

Poll voters, leave me a link to your responses in the comments thread and I'll have a roundup of those answers posted up here sometime next week.
Posted by Astronaut Mike Dexter at 7:40 AM

On the marquee win front, it's probably right that the conference hasn't gotten itself an out of conference scalp worth crowing about. But it's not for lack of trying. Arizona State shouldn't suck as much as they do. Florida's win over Miami is diminished, as is Bama's win over Clemson. Even the games coming up look meh. The big WVU game for Auburn now looks like an underwhelming matchup of little consequence. Our game against Tech may be between two ranked teams, but if that's where we're going for cred, that's sad. the SEC may actually be counting on Vandy to beat Wake for its highest-ranked conference victory.

The good news? Outside of Tennessee's collapse at UCLA, the conference doesn't really have any inexplicable, Louisiana-Monroe style losses.

The Southeastern Conference - refusing to lose to the losers, refusing to play the winners.

Amen about the Wisconsin in a bowl game comment. Can we also include Virginia and Pur-don't into that conversation on bowls.

I'll take Texas in the Cotton Bowl anyday. Gotta go get my Firefly and mixers ready to start tailgatin with the gals on Sat. Luv ya.

Gamecock Man from Garnet and Black Attack, present and ready for action: http://www.garnetandblackattack.com/2008/10/8/630254/sec-power-poll-roundtable.

A Sea of Blue's somewhat belated response is here:

Thanks for compiling these.