Votin' time again, and I can now officially announce (even though I'm, like, two weeks late in doing so) that CBS Sports is the new home of the BlogPoll. We voters get our preliminary ballots (mine is below) in by noon Monday, which get tallied up and included in CBS's collection o' polls; finalized ballots are due by midday Wednesday, at which point that week's official BlogPoll results go up here, with the usual analysis and calling-out of nonsensical votes. Does that kind of make sense? Your comments and suggestions are, as before, welcomed, and I'll be sure to post any major changes between the preliminary ballot and the final ballot up here.

Games watched: Georgia-Vanderbilt, Alabama-Ole Miss, Texas-Missouri until things got completely out of hand in the first half, LSU-South Carolina thereafter.

· No change in the top eight this week, though I'd be lying if I said I wasn't tempted to flip-flop Penn State and Alabama at the #2 and #3 spots. As dominant as Alabama has been this season, they're not so good that someone couldn't punk them if they don't learn to put opponents away in the second half. 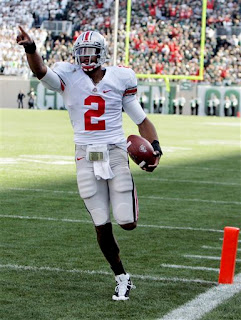 · Yes, Ohio State's back in the top ten after burying Michigan State. I don't know that we need to be worrying about a third straight Buckeye appearance in the national championship game just yet, but neither do I doubt that tOSU is poised to make the Big Ten race very interesting (perhaps a little too exciting for the SEC partisans who had hoped the Buckeyes would be banished from the MNC once and for all after their collapse in L.A.).

· Biggest riser of the week: Texas Christian, for emphatically thinning the ranks of the BCS-buster hopefuls last Thursday night. Plummeting: their victims, previously known as the BYU Cougars, and a suddenly flailing Missouri team. Yeah, we knew the Tigers couldn't play defense, but if the rest of the conference has started to figure out their offense, this stagecoach might be turning back into a pumpkin.

· A bunch of teams in the lower third of the poll got bounced out due variously to competitive losses (Vanderbilt), blowout losses (Michigan State), or being in the Atlantic Coast Conference (the other three). I had to replace them with somebody, and as a result, everything from 19 on down is pretty much a peanut gallery of the kinds of teams whose time in the top 25 you'll probably be able to measure with a stopwatch. For no particular reason I feel like Oregon should be in the top 25 somewhere, but they didn't even play this past week, so Arizona, who actually knocked off a ranked team, gets their spot. Flying-under-the-radar Boston College checks in at #24 for knocking off ACC frontrunner Virginia Tech, though being the frontrunner in the ACC right now is kind of like earning the Green Party's nomination for president. And no, I'm no crazier about having Georgia Tech in the top 20 than any of you are, but the fact is they just keep winning games, so there you go.

1. Alabama -- The best team in the league has been doing their level best not to act like it over the last few weeks. If you had any doubt remaining in your mind as to whether Bama or Texas should be the #1 team in the nation, this past Saturday probably solved that for you.

2. Florida -- It occurred to me over the weekend that the Gators probably really wish they could've drawn Auburn out of the SEC West this year as opposed to the last two. 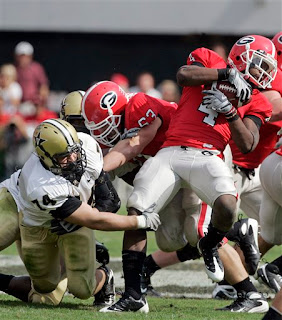 3. Georgia -- As with the Tennessee game, dumb mental errors and ill-timed penalties kept the final score against Vanderbilt from reflecting what was otherwise a pretty statistically dominant performance. They don't have long to work on what's causing that dominance to get lost in translation before they have to hop on the bus to Baton Rouge.

4. LSU -- Took a long time to figure out Stephen Garcia and the South Carolina offense, but when they finally did, they shut it down emphatically, which should give them some solid momentum as they head home to face the Dawgs.

5. Vanderbilt -- For a team that stayed as close to Georgia on the scoreboard as Vandy did, they never really looked like they were a threat to rise up and win the game; they're gonna need to pull another surprise win out of their bag of tricks pretty soon if they want to avoid a 6-6 finish.

6. South Carolina -- Played well against LSU in the first half but ran into a defensive buzzsaw in the second, which blunted a lot of the momentum they'd built up over a four-game win streak. At this point I'm starting to sense a familiar whiff of Shreveport in the air.

7. Ole Miss -- Hard to tell whether that was a genuinely solid team last Saturday or just one that benefited from another second-half Alabama snooze. For the time being, I'm going with the latter.

10. Auburn -- Has any game lost its luster faster than this Thursday's Auburn-West Virginia matchup? What looked like a meeting of two potential juggernauts in the preseason is now merely a battle to see who's slightly less disappointing. 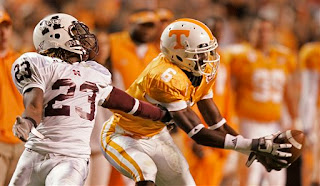 12. Mississippi State -- Rats, I was really hoping for another 3-2 outing from these guys, but then State's quarterback had to go and start throwing touchdowns to the wrong team. You know a team is in dire straits when they can't even suck in entertaining fashion anymore.
Posted by Astronaut Mike Dexter at 1:49 PM

Doug, can I ask you something? You're one of many BP voters who have South Florida ahead of Pitt. Because I can't ask them all, I'm settling for just asking you, because you are someone who I know to be a rational, thinking human blogger: why do you have South Florida ahead of Pitt when Pitt beat South Florida at South Florida? It can't be the strength of the rest of what USF has accomplished, because the best remaining win of USF's is I guess at NC St., while Pitt has defeated decent teams from Iowa and Navy. With both teams having the same record, I just don't see how the team that has better wins AND beat the second team head-to-head can be ranked below the second team.

But so many smart people see it otherwise that I feel like I need to ask if I'm not seeing something. Any help?

No, you're exactly right, and that will be rectified today, before the final ballot gets turned in.