Your so-called liberal media at work. 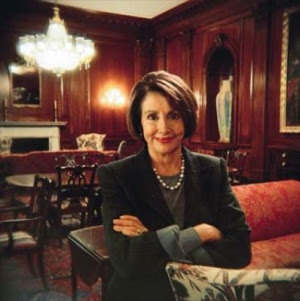 Yes, I'm cute and I have six grandkids, but that ain't an invitation to f$#! with me.

House Speaker Nancy Pelosi takes off this week to lead a bipartisan delegation to Israel and Syria. She's going to meet with the Israeli Knesset and then convey a message from them to the Syrian government regarding the Middle East peace process. The White House, for whatever reason, spoke out against this, saying that they "discourage" members of Congress from going to Syria, period.

The trip was a frequent topic of conversation on CNN's "Late Edition" with Wolf Blitzer this morning. It came up in a segment in which Blitzer talked with Democratic Sen. Dianne Feinstein and Republican Sen. Kit Bond; it also came up during the show's Sunday-morning talking-head recap, in which they played a clip of presidential counselor Dan Bartlett condemning the trip on ABC's "This Week."

Now, how many times was it pointed out that Pelosi's trip was a bipartisan delegation -- or that the Republicans had already sent their own delegation to Syria? It certainly wasn't mentioned in Dan Bartlett's sound bite, which was played by CNN without any rebuttal. Wolf Blitzer never mentioned it. The story on CNN's own Web site didn't even mention it. The only person who bothered to bring this up at all was Feinstein, who referred to the trip as "bipartisan" on "Late Edition."

Look, I'm not trying to say that Nancy Pelosi should be put on a lofty pedestal where she is invulnerable to any criticism. There are legitimate disagreements (from both the left and the right) with the policies she's pursued in her short time as speaker, and the media have every right (not to mention a responsibility) to air that. But dammit, if you guys are going to criticize her, shouldn't you have to do better than this? So far you've helped propagate a 100-percent-false story in which Pelosi was said to want an upgrade to the equivalent of a commercial airliner to fly her home to her California district (a plane which, it should be pointed out, ranged anywhere from a Boeing 737 to a "jumbo jet," depending on who was flogging the story), and now you're basically sitting back and repeating White House spin verbatim on a trip that, so far as I can see, is hurting precisely nobody. This is the best you've got?

Personally, I think Pelosi has done a pretty respectable job of kicking ass since taking over the speakership in January, a tradition that I hope continues. And I hope the next time she's on Wolf Blitzer's show, she makes him cry.
Posted by Astronaut Mike Dexter at 1:15 PM

The NY Post had her on the front cover superimposed with tiara and Miss Syria sash.

You know you'd hit it Gillett.

Seems as though Nancy needs to take notes next time she goes stirring the pudding in the Mideast.
http://www.jpost.com/servlet/Satellite?cid=1173879247562&pagename=JPost%2FJPArticle%2FShowFull

So Pelosi can go half way around the world to meet with a bunch of killers but, can't seem to be able to sit down and talk with Bush.

She should be tried for Treason.