Thirteen things I learned at Bloggerpalooza '07. 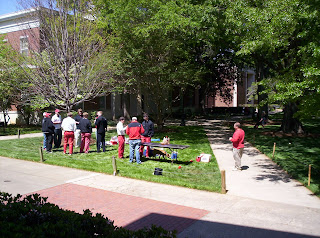 1. This is just a weird time of the year for weather in the South. Last year it was reasonably warm but rained cats and dogs; this year the skies were completely clear but the temperatures barely crept up into the low 40s. By comparison, it was in the 70s the day of the Georgia Tech game last year, otherwise known as the Saturday after Thanksgiving.

2. That said, given the choice between sitting inside a concrete parking garage on a normal day and hanging out on the North Campus quad in the mid-40s, I'll take the quad. We really do have a kickass campus.

3. The best-laid plans of mice and men really do go astray. Trying to avoid the various disasters of last year, I sent my cell-phone number to those who had expressed an interest in coming, and . . . my cell phone promptly died right as I was parking my car.

4. The more really does = the merrier. In spite of the cell-phone screwup, a bunch of people managed to stop by -- altogether we probably had about a dozen people show up for Bloggerpalooza over the course of the morning/afternoon, which by my calculations represents a 300-percent jump from last year.

5. It's also fun when you have a group of Sigma Pis tailgating right next to you and adding to the head count, and one of them has been drinking since 7:30 a.m.

6. Drunks aren't good at climbing trees, yet are hilarious when they try to do so.

7. Paul Westerdawg is a mountain of a man. I'd never met him in person before, and only talked on the phone with him once or twice; unlike me and Kyle, he scrupulously maintains his anonymity on his blog, so neither of us knew what to expect when he showed up. But the dude is like seven feet tall, 350 pounds if he's an ounce, and showed up gnawing on a turkey leg the size of one of Lou Ferrigno's biceps. Right before we packed up and headed over to the game, he filled a Big Gulp cup full of Maker's Mark and shotgunned it. I asked him, "How much Coke was in that cup?" and he replied, all confused like, "Coke?" All I'm saying is, do not fuck with this man.

8. Krispy Kreme donuts are actually fried. I had made a big deal about bringing them, and figured they would be the perfect tailgate treat for someone who had given up fried food for Lent, and then baby sis has to go and explain to me exactly how they're made. Great! Wonderful! I still ate 'em.

9. For all our faults, Georgia's fan base is a devoted bunch. More than 20,000 people (21,407 to be exact, according to David Ching's story in the Ledger-Enquirer) showed up to watch what was basically a glorified practice. Which, at $5 per admission, means more than a hundred grand went to the Hope Haven center for people with developmental disabilities. They also came from a long way: Our tailgate alone had guests from the Atlanta metro area, Birmingham (of course), West Palm Beach, and Roanoke, Virginia.

10. We also collectively know more about Aqua Teen Hunger Force than probably any other fan base out there. Maybe this has a lot to do with Cartoon Network being right down the road in the ATL, and I'm sure Georgia funnels a bunch of grads into that organization, but still, damn.

11. Georgia folks party harder for G-Day than most people do for games that actually matter. You know, I'm thinking of putting that on the T-shirts for next year.

12. Also a good idea for next year: more chairs.

Seriously, we had a blast. A sun-drenched, booze-soaked, fried-chicken-and/or-donut-eating blast. Thanks to everyone who showed up -- particularly those like Universal Remonster and others who came a long, long way to be there. I don't want to presume to speak for Mayor Kyle here, but I'm definitely planning on doing it again next year.

More on Bloggerpalooza -- including highs and lows from, you know, the actual game -- to come.
Posted by Astronaut Mike Dexter at 9:37 PM

By the way, I was the big dude with the beard. And way to talk up PWD. Didn't look that big to me...

Nice dude, sounds like happy times. The next time I am within 300 miles of Athens on the day of this occasion, I'm in. That being said, I will definitely be cheerfully welcoming all of you E.S.T Dawgs to Arizona State on Sept 20, 2008 so I hope you are able to make it out.

If Kurt Vonnegut had been at the tailgate then y'all would surely have been set with the sunscreen.

Hopefully someone in Athens got horribly drunk and vomited on Michael Adams' car, or better yet strolled over to his casa on Prince and let loose over there.

Do you have any pics of the drunk tree-climbing? Sounds like fun!

At 12:37 pm Tree Climber Friend 3 yells to children passing by:
"Don't worry kids. The guy laying in poo at the bottom of the tree is harmless. It's performance art. He's a just cautionary tale."