Come and see the violence inherent in the system: The Tennessee Tech preview.

Last season: Started 3-2 with wins over Gardner-Webb, Southeast Missouri State, and Central Methodist (the last of which is an NAIA school), then lost their last seven to finish 3-9, 1-7 (last place) in the Ohio Valley Conference. Their seven conference losses came by an average of 21.5 points.

This season so far: Major improvement -- the Golden Eagles started 1-2 with losses at Eastern Kentucky and Kansas State but have won four of the five games they've played since. Currently 5-3, 4-2 in the OVC, good for fourth place out of nine teams.

Hate index, 1 being "Glengarry Glen Ross," 10 being Glenn Beck: One. Seriously, I've had to go back like a dozen times this week to remind myself whether we're playing Tennessee Tech or Tennessee State. You think this is a game I've managed to gin up much hate over?

Associated hottie: Other than a former New Jersey state assemblywoman and, weirdly enough, not one but two members of the Rockford Thunder women's softball team, TTU's list of notable alumni on Wikipedia is kind of a sausage fest, so I checked out the home page for the school's cheerleading squads. Here's Jessica Downs, a member of the co-ed cheer unit who made the 2008 Athletic Director's Honor Roll. I research because I care. 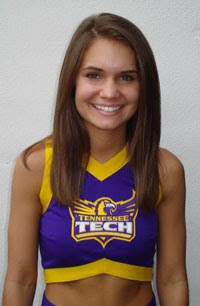 What excites me: TTU may have shown major improvement over last season, but it comes with a bit of an asterisk -- none of the four DI-AA teams they've beaten have a winning record either in OVC play or overall. The Golden Eagles have a pretty good pass defense, allowing only 171 yards per game through the air, but other than that they're really no better than so-so in most of the statistical categories. Their offense is particularly mediocre, averaging only 92 yards per game on the ground (that's even worse than our running game!) and 282.8 yards total, 92d out of 118 teams in Division I-A. Even Willie Martinez should be able to hold them down pretty easily.

What worries me: I'm worried about the same stuff I always worry about when Georgia plays a get-blown-out-for-dollars opponent like this one -- a Bulldog team that knows it doesn't have to try all that hard and plays like it, making dumb mental errors and allowing big plays we should never be allowing to a DI-AA also-ran. Only this week those worries get ratcheted up a notch, for two reasons: One, we're just not all that good at much of anything this year, and two, our season has more or less had the garbage-can lid slammed on it by the Gators. We're at a point now where our absolute best-case scenario is an Outback Bowl berth. Now, I'm no Marc McAfee, so my standards for this sort of thing are surely lax, but I can totally see how it would be hard for a Georgia player to get motivated for this game. I'd be lying if I said I was getting up for it myself. 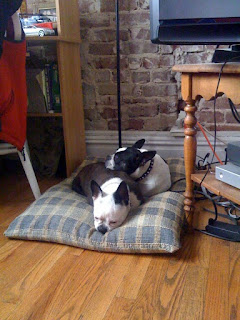 You guys go ahead on to the stadium. Save us a seat, we'll catch up.

We'll also be playing this game without the services of one A.J. Green, who sustained what has been referred to as a "pulmonary contusion" against Florida and may be out for the Auburn game as well. (Gulp.) Joe Cox and Logan Gray, neither of whom have particularly distinguished themselves at any point in the last month, will have their work cut out for them without the nation's most reliable safety valve available to catch their throws. We're also likely to be without our best pass rusher, Justin Houston, who hyperextended his elbow in Jacksonville.

Player who needs to have a big game: WR Tavarres King. Since "playing-for-next-season" time may be looming over us already, I would hope we'll get to see a good dose of Rantavious Wooten and Marlon Brown in the passing game on Saturday. But with A.J. Green out, King is our next biggest contributor in the WR corps and will have to shoulder a much bigger load helping to prop up our sagging passing game. TTU has managed to pick off 13 passes in eight games, so they may not be a complete pushover against the pass, and our wideouts can't afford to take any plays off just because the opponent is DI-AA.

What does it all mean? As much as I hate games between I-A and I-AA teams, particularly when it's our team scheduling them, I'd be lying if I said I wasn't grateful for this one. If ever there was a team that could use a breather right now, it's us. And I won't feel bad if we blow the Golden Eagles out of the stadium, either; we've paid them $475,000 to come to Athens, they know they're likely going to get blown out, so we might as well get our money's worth. That's how the system works, and for this one weekend, I'm OK with it.

For the record, no, I don't think we're going to blow TTU out, at least not as badly as a lot of our fans would surely like us to. But neither do I think Georgia is quite bad enough to lose this game at home, as tempting a prediction as that might be for some of the less confident, more hysterical portions of our fan base. Barring a complete collapse far worse than anything we've seen so far this season, we'll inch closer to bowl eligibility on Homecoming Saturday, it just won't be particularly engaging to watch. 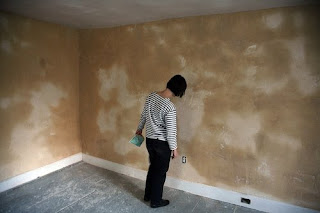 If you've seen Georgia play a gimme game at any point in the last decade, you probably know what's coming. On offense, we score early but follow that up with some dumb-ass penalties and plays botched due to lack of full attention; on defense, that same inattentiveness leads to a couple more big plays than there ought to be, making the game look closer than it actually was in the Sunday box score (we've allowed an average of 19 points to our last four DI-A opponents). In this case, our propensity for turnovers (I think we can expect at least one pick, either from Cox or from Gray) will probably be responsible for at least one score by the Golden Eagles, even if (hopefully) it arrives too late in the game to make any difference.

What I'd really be watching this game for (if I could watch it -- I'm going to be in West Virginia this weekend, far away from cable or wireless Internet access, and where people are too busy questioning Bill Stewart's competence to be concerned with Mark Richt's in the first place) is to see if there are any changes, either personnel-wise or strategy-wise, that would indicate there's any kind of larger change in mentality going on in the program. Unfortunately, I don't expect there will be any. When I say "unfortunately," I'm not even talking about the near-zero probability that Aaron Murray or Zach Mettenberger will see the field; while I think there's some wisdom from a long-term standpoint of giving them some playing time, there's an equal chance Richt might be kicking himself three years from now for blowing one of their redshirts in the last month of a season that was already lost. What I'm more discouraged by is Willie Martinez's apparent inability to diagnose, much less fix, what's ailing our defense, particularly against the pass. What Martinez's comments tell me is that we're going to be playing the same old soft zone and using the same old personnel (i.e. not Bacarri Rambo, for reasons that continue to mystify me) to run it; obviously the consequences of that are a lot less dire when you're talking about Tennessee Tech than when you're talking about Florida, but still. If you're headed to Athens to get both some barbecue at one of the Homecoming tailgates and a glimmer of hope that a turnaround is on the way for the Georgia program, be prepared to head home with only half of those wishes fulfilled. 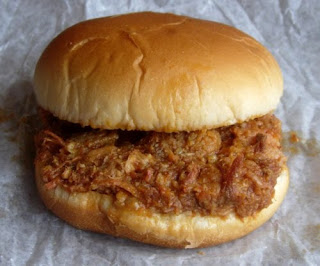 So I'd expect to see 16 or 17 points put on the TTU side of the scoreboard, and as for Georgia -- well, we should at least be able to match our production against Vanderbilt, maybe tack on an extra TD for funsies. But running it up just isn't Mark Richt's style and still won't be even at a time when we could probably use an opportunity for a real cathartic jackhammering, so any bigger blowout than, say, 42-17 is probably asking for too much.

Will I take it? Oh, definitely. A win is a win, particularly when you're still trying to scrape together six, and like I said, it's not like we haven't paid enough for this one. Come get your whuppin' and pick up your check, Tennessee Tech, and make sure you indulge in the many joys of Athens while you're here. You'll find that most of us are too fatigued to mess with you at this point anyway.

If you're trash-talking: Then you're just being mean. Still, as a grown man with the maturity and mentality of an 11-year-old, I cannot deny some inner chortling at the thought of referring to our pending opponents as "Titty U."

Incidentally, TTU's coach is one Watson Brown, whom I have some familiarity with from his tenure as the head coach at UAB from 1995 to 2006. After going 3-9 with the Blazers in his final year, he left Birmingham voluntarily to take over at Tennessee Tech; his younger brother is Mack Brown, whose career has followed a somewhat different trajectory. Maybe there's something in there you can mine for trash-talk, but please, don't be a dick about it. I would hope we haven't sunk so low that we're getting our jollies from shitting on DI-A fans. Save that stuff for the nerds.

I will run up and down the street in front of my house wearing nothing but a Georgia flag wrapped about my nether regions if: Georgia scores more than 50 against the Golden Eagles. I don't think that's that far outside our abilities -- I mean, Kansas State hung 49 on them earlier this year, and they managed to lose to UL-Lafayette, for crap's sake. Just move that ball, Dawgs, and don't give it to the other team any more than you absolutely have to, and we'll be fine.
Posted by Astronaut Mike Dexter at 10:00 AM