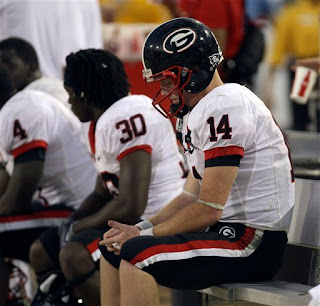 When I was a kid, and my mom would order me to clean up a bedroom that I'd managed to really trash with toys and all kinds of other junk, frequently I'd spend the first hour or so doing stuff that looked sort of like cleaning but wasn't. Like, I'd line up my Transformers in battle formation or "pick up" my Legos by building things out of them -- I'd be engaged in some kind of activity that looked cleaning-esque but was really more playing than anything else. An hour or so later, my Transformers might be more organized and I might have a half-assed Lego creation to show for my efforts, but nothing about my room would be appreciably cleaner; given the amount of time and effort expended, I wasn't anywhere near as close to fulfilling my mom's orders as I should've been.

I flashed back to those preadolescent attempts to snow ol' Mom on Saturday when the Dawgs charged out of the tunnel at Jacksonville Municipal Stadium wearing black helmets and pants, which apparently constituted the sum total of our preparations and alterations over the bye week preceding the latest edition of the World's Largest Outdoor Cocktail Party. OK, that might be overly harsh: Stacy Searels seems to have found an O-line combination that works in the sense that our run-blocking was dramatically improved, to the point where Georgia finished with more than 120 rushing yards and both Washaun Ealey and Richard Samuel finished with per-carry averages better than 4.0 yards. Other than that, though, we were the same old team we've been all season, in all the same old stupid ways -- dumb, momentum-killing penalties; the head-slapping interceptions that increasingly appear to be a feature, not a bug, of Joe Cox's game; an inability to consistently keep any of our defensive backfield within seven yards of a receiver. I distinctly remember that on Florida's second touchdown pass, the one where Brandon Boykin actually did cover Riley Cooper beautifully and Cooper caught it anyway, we had a defender -- either Reshad Jones or Bryan Evans, he had a single-digit number -- running around in the middle of the field with nobody from either team within 20 yards of him. That was what we were doing for two weeks?

The black pants and helmets were lipstick on a pig, a neon sign hanging over the heads of our coaches indicating they're officially out of ideas. Starting Bacarri Rambo, the only member of our secondary who's demonstrated a consistent ability to cover, much less intercept, anything this season? Actually trying to return punts rather than putting Logan Gray back deep to declare to the world we have no intention whatsoever of returning it? Letting Blair Walsh boot kickoffs deep on a regular basis? (Yes, he put most of his KOs in the end zone, but there were a couple of instances where the old directional kicking reared its ugly, arbitrary head once again, for reasons I cannot even begin to speculate on.) Our play is sloppy and inconsistent because the decisions being made at the top are sloppy and inconsistent. It's bad enough that we're eight games into the season and still throwing things at the wall to see if they'll stick; sadly, we appear to have torn through our Bag Of Things To Throw so completely that we're down to uniform switcheroos, which is even worse.

I've spent so much time railing away at our coaching staff this season that some people might stumble onto this site and get the impression that I've started to enjoy it. For the record, I don't. I've lived and died with these guys for eight-plus seasons now, through such triumphs as the '02 SEC championship and the '07 winning streak, and I absolutely feel a twinge of disloyalty whenever I talk about the prospect of dismissing anyone who played a part in those accomplishments. But with each passing week I get more and more of a feeling that our coaches have begun to stagnate, that "This is how we've always done it so we're going to keep doing it this way" has been allowed to supersede logic, statistics, or changing conditions on the actual field of play in our decision-making process. And it would be one thing if that stubbornness were merely resulting in sloppy play, squeaking out four- or five-point victories over opponents we should be hammering, but we're way past that now. Last year Richt suffered the worst blowout loss he'd experienced as Georgia's coach (the 49-10 loss to Florida); in the past month alone, he's now suffered the second and third worst (the 45-19 loss to Tennessee and this past Saturday's, respectively). Is that not enough proof of a program in decline, of problems that go beyond the simple hands-off "stay the course" fix?

Liberal though I may be in my politics, I'm conservative when it comes to football; as I've confessed before, I almost always err on the side of not firing people, and I rarely embrace change just for change's sake. We're getting awfully close, though, to the point where change for change's sake might be a worthwhile course of action, and that includes dumping coordinators, moving freshmen to the top of the depth chart, a switch at quarterback, everything on the table, at least as a sign that "that's the way we've always done things" is no longer our team-wide M.O. Because the game of risk vs. reward we're playing is no longer confined in scope to this season; we're now at a crossroads where we have to start asking whether it's time to focus on next season. And as much as I hate it for the upperclassmen for whom this November may be their final memories of putting on the Georgia uniform, I don't know that it's right to place whatever meager goals we still have in our sights in '09 ahead of the need to lay groundwork for loftier goals in the future -- that'd mean we're selling a hungry, motivated group of youngsters short just to throw a bone to a group of upperclassmen who've failed to produce for a while now. I hate referring to them in those terms, especially when the blame for their underperformance rests back with the coaches. But that's starting to look like the choice we're stuck with.

I apologize for this post being so scattershot and rambling; I also apologize for the fact that it sounds like I've been writing the same post over and over again for the past month or so. I sincerely hope Mark Richt gives me something else to write about after the Tennessee Tech game. But it's got to be something real, not uniform tweaks or backup QBs being put on special teams or more deck chairs being rearranged. The sad thing is, once upon a time I could place near-absolute faith in Richt being able to tell the difference; hopefully I will be able to do so again.
Posted by Astronaut Mike Dexter at 1:08 PM

Email ThisBlogThis!Share to TwitterShare to FacebookShare to Pinterest
Labels: football, georgia bulldogs, teh suxxorz, times I wish I was dead

Meh. Either Richt makes the change, or Damon will. And Damon's change will be harsher, no doubt.

In the meantime, instead of watching our coaching staff spin its wheels, blame fans for not knowing football, start awful upperclassmen, and do things that everyone knows haven't, don't, and won't work, switch the channel to Georgia basketball, where you'll see actual *coaching* this year and the actual *improvement* that goes along with it. Hell, they beat Florida last year, even.

Just a heartbreaking season for everybody involved. I cannot wait for it to be over. And I never thought I would say that about college football season.

Love your Blog- just found it on Saturday.

I think it's time to make the real big change. The only way we are going to get rid of Willie is to get rid of Richt. I like the guy... he's awfully nice, a good family man... looks like Kevin Costner...but in sports in general sometimes you have to make the tough decisions - long-term. Another platitude that often holds true is if you can't beat em join em.

That Charlie Strong coaches a mighty fine defense, and you gotta think he would relish the chance to lock horns with his mentor...

And maybe if word got around to Richt that Boosters are making quiet overtures to Charlie Strong, he might get inspired and let Willie go.

Complacency has taken its toll on the program. That complacency is from the top down. Your metaphor for the uniforms was quite appropriate. Your reference to a "seniority" system just shows how deep the rot is in the system. Failure to consistently put the best players on the field is a recipe for oblivion. It is hard to imagine that the Richt regime may be on its way out. For a guy who came to Athens promising to "tear the lid" off of Georgia football, I think the Richt regime is currently in a bottle, strongly corked.

Am I the only Georgia fan who finds the prospect of hiring Florida's DC completely unaccceptable? I heard the ESPN writer who first floated that one was just making shit up, and that made sense to me; now I hear it echoed in the blogosphere, and it makes me a little queasy.

Didn't FSU's DC get let go recently? What about him?

FSU's DC was let go because he's terrible. Is that what you want? A less talented coach just because he's not a former Gator?

You have to let those feelings go. I'd prefer an excellent DC, no matter what school he's from. Sadly we have to watch Willie Martinez and Mike Bobo ruin this program for another 4 or 5 games.