The return of the post-spring, pre-season, composite, comprehensively number-crunched, not-so-random 25.

The 2008 college-football-preview publications have started hitting the streets, and pundits around the country have started putting together serious top-25 lists as spring practice recedes in the rearview mirror and the season gets closer, so it's about time for another top-25 matrix like the one I did last year.

Before we get too deeply into the 2008 numbers, though, it's worth looking at the 2007 version to see how accurately it predicted the actual preseason rankings that would come out a couple months later. Looking at the preseason sportswriters' and coaches' polls, it appears that the composite was pretty accurate; other than some minor disagreement over West Virginia and Auburn, there are hardly any major differences amongst the three until you get down into the high teens, with very few teams having a discrepancy of more than one ranking slot or so.

So if last year is any indication, this year's matrix should be a fairly accurate preview of what we'll see from the AP and USA Today come this time in August. You can view the full, detailed rankings in a Google spreadsheet located here, but the composite top 25 goes-a like this:

Here's the rundown of the rankings that I used -- again, listed in chronological order of when they were released, since obviously the more recent ones are likely to be a little more accurate.

You'll note that this year, in contrast to last year, I only included predictions that came out after most schools had completed their spring practice -- no knee-jerk super-early rankings that came out the day after the 2007 national-title game. I'll add more rankings into the mix as they come available, but in the meantime, here's what jumps out at me about this first set:

• It really is crazy to go back and look at the 2007 composite, in which literally every single ranking had Southern Cal at #1, when you see how divided folks are over #1 this year. Four teams have at least one number-one nod for 2008, yet the team that has the most -- Georgia -- is in second place overall (primarily because of a ninth-place ranking from Phil Steele). Florida gets Steele's first-place vote but only a #10 from The Sporting News. And yet out of ten sets of rankings, only 15 different teams have at least one top-10 vote. What that tells me is that people are basically in agreement over who's top-ten caliber -- there just isn't much consensus about how to sort that top ten out. 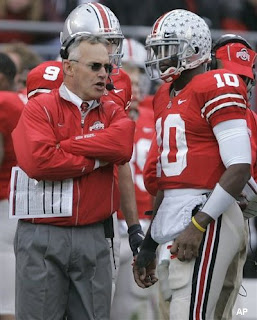 • Honestly, even as an SEC homer who could only giggle as Ohio State went down in flames to SEC teams in two straight title games, I have no problem with the Buckeyes being the overall #1 here. They have as many, or more, returning starters as anyone else in the top 25, and they should easily dispense with the rest of the Big Ten this year; really, the only reason to put them lower than #2 at this point is because you're docking them style points for shitting the bed against LSU in the Superdome. The only people who left the Buckeyes outside the top two were Lindy's (#3) and Tony Barnhart, and I suspect Tony's fifth-place ranking was more red meat for his SEC-oriented AJC readership than anything else.

• Teams that are inspiring some debate: Texas Tech, a top-10 team according to Stewart Mandel and just outside the top 10 according to Schlabach and Steele (which, coincidentally, is also the name of my accounting firm), but down in the 20s according to Matt Hayes; and South Florida, Phil Steele's head-scratcher of a top-10 pick but only a high-teens team in the view of CSTV, CBS, and Lindy's, and a team that four people saw no reason to rank at all. Illinois, too, ranges from a top-10 spot (so sayeth Tony Barnhart) to a no-show (on Steele's list).

• Conspicuous by their absence: Boston College, last year's ACC Atlantic Division champion and a #10/#11 finisher in the polls but unable to get a single vote this preseason; Hawaii, whose crown as the king of the mid-majors has evidently passed to BYU, a consensus pick in the mid-to-high teens; and fricking Michigan, whose complete and total absence from any of these rankings leads one to believe that the Wolverines' transition to a Rich Rodriguez spread offense is going to be a difficult one. Also, once-trendy California appears to have crashed right out of most people's lists after a late-season collapse in '07 (their only ranking so far this year comes from Steele); and Alabama, whose snub by everyone except Mandel and Lindy's looks like a sign that neither Nick Saban's celebrity status nor his ZOMG AWESOME recr00ting sk1llz! have yet made much of an impact outside of Tuscaloosa County. 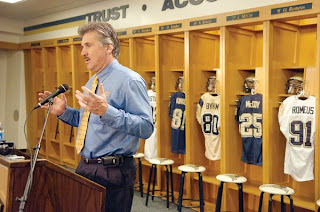 • Conspicuous by their presence: the Pittsburgh Panthers, who get a ranking from everyone except nationalchamps.net and Athlon; apparently the return of LeSean McCoy and a quarterback who played in one whole game last year are enough to make folks forget that the team is, you know, coached by Dave Wannstedt. Just outside the top 25, Michigan State got nods from four different pundits (exactly four more than Michigan did, so if you're a kitten, you'd do well to steer clear of Brian Cook for the next few months). And Phil Steele, God bless him, continues to confound with his assertion that South Carolina and Notre Dame are top-25-worthy.

• By contrast, the ACC -- with three teams in the top 25 and one more receiving votes -- looks like it's still going to struggle in its attempts to be taken seriously as a football superconference. Let's put it this way -- when your standard-bearer is a Tommy-Bowden-coached Clemson team, you're probably not ready for The Show just yet. The Tigers, incidentally, are pretty consistently pegged in the high single digits to low teens across the board, but let's be honest, most of us have heard this song before.

Your thoughts? Again, the composite will be updated if/when further top 25s are put out.
Posted by Astronaut Mike Dexter at 7:59 AM

So it looks like we play 5 out the composite top 25. Yikes.

In the national picture, it seems to me that Oklahoma is the silent assassin. No first place votes, but tons of returning talent (I like Bradford a lot) and sure, the Big 12 looks tougher on paper this year than in years past ... but come on, it's the Big 12.

Nightmare scenario: Undefeated Oklahoma and Ohio St., one-loss SEC champ Georgia. Unlikely, but ... creeps you out a little, doesn't it?

Anyone super-high on Florida is just asking for a letdown. It cannot be overstated just how rancid their defense is last year. I fail to see how/why it'll magically improve, as it seemed to get even worse as the season went on.

True, but look at their schedule.

OOC, they play down FSU, down Miami, down Hawaii, and Citadel.

In conference, they drop Auburn and pick up Arkansas. They have a 3 game schedule: @ UT (with a week off to prepare), LSU @ home, and Georgia.

They could conceivably play worse defense than last year and coast to 10-2.

Big 12's an interesting one, if for nothing else than to see how long it takes for Nebraska fans to turn on their coach.

I've gotten the feeling that a lot of "analysts" have tried to stay away from looking at the ACC this year because of how much change has been going on the past few years. The ACC seems like a weird conference overall with so many teams *TRYING* to get back to national prominence and dealing with coaching changes.

There's FSU and Miami may or may not be coming back to the top, who knows what Butch Davis is going to pull off with UNC this year (could possibly sneak into the top 25, since they're in the easier ACC division), what will GT look like, which game will expose Clemson as being an incomplete team this year, will Wake Forest be any good, what about NC State, how good will VT be, etc.