Suppose they gave a social and nobody came? 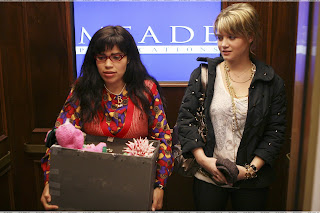 I realize I'm way late to the crush party on this one, but one of the topics of conversation at the office today was the Great Delta Zeta Wallflower Purge of '07, and I picked up a new piece of information that I hadn't known before.

From the linked New York Times article (my emphasis below):

Worried that a negative stereotype of the sorority was contributing to a decline in membership that had left its Greek-columned house here half empty, Delta Zeta's national officers interviewed 35 DePauw members in November, quizzing them about their dedication to recruitment. They judged 23 of the women insufficiently committed and later told them to vacate the sorority house.

The 23 members included every woman who was overweight. They also included the only Korean and Vietnamese members. The dozen students allowed to stay were slender and popular with fraternity men -- conventionally pretty women the sorority hoped could attract new recruits. Six of the 12 were so infuriated they quit.

So, the good news: Of the 12 Chosen People permitted to stay, half of them were so rightly disgusted with the treatment of the Notties that they left the sorority. The bad news: Six stayed behind. I've obviously never been in a sorority, and I had to take a second to think before I could say whether I'd ever dated a sorority girl, so I have to ask: If your sorority chapter has just booted two-thirds of its members because they weren't hot enough, and then six of the hotties even leave in protest, and you guys are the last six staying behind, aren't you like the six shallowest people in North America?

The national Delta Zeta leadership's CYA can be found here. In the meantime, those last six DZs at DePauw might need to be reminded of a little something.

When the Delta Zetas came for the fatties,
I remained silent;
I was not a fatty.

When they kicked out the uggos,
I remained silent;
I was not an uggo.

When they came for the girls with bad skin,
I did not speak out;
I did not have bad skin.

When they came for me,
there was no one left to speak out.

Email ThisBlogThis!Share to TwitterShare to FacebookShare to Pinterest
Labels: stupidity, you know what I blame this on the breakdown of? society

I
laughed
out
loud.

And speaking of l'ing o l, I found your site only halfway (or so) through football season. Thankfully, I found your Interplanetary Chat post recently through dawgsports.com.

Heh. Great poem. Got another one:
The hottest places in hell are reserved for those, who in time of crisis, had to skip the sorority meeting to "study."

This was ironic to me because in the Delta Zeta chapters I knew, it didn't matter what you looked like. Everyone put out. Easy DZs.

Listen, they should have just done what we did in my sorority -- hide the ugly, fat girls in the kitchen during rush. It's called "water duty." God. They don't know anything about sisterhood at DePauw.

I onced visited a sorority (Delta Delta Delta - can I help ya help ya help ya) when I was at uni to work on a class project with a chic who lived there. That one visit was enough to make me not want to join nor step foot in one EVER.

The DZs were easy where I went to school too.

It was the Sigma Kappas that were so heinous that they couldn’t get anyone to pledge. Girls would cry about having to go in there during rush, even though everyone had to go into all the houses. Facing a similar issue to DZ at DePauw, they chose to import hotties rather than boot the notties. All of a sudden there were a couple of Amazon Barbie girls that walked around campus in Sigma Kappa letters 24/7. They could have been paid extras for all I know, but it seemed to be working.

In defense of the six DZs who didn’t drop out, I read somewhere that four are seniors and that all of them are living in the house, so it may have been an “I’m outta here anyway/I’d rather not be homeless” kinda thing. Maybe. Girls are mean.

I don't see what's wrong with this at all. The sorority is basically a private club that gets to select it's members. They decided to keep the hot ones. If you don't like that go join the ugly sorority.

No one challenges the DZ's right to associate with whomever they choose. We're just exercising our free speech rights to call them out and the University is exercising its right not to grant them official recognition. Tacky is as tacky does, but we don't have to accept it silently.