War, peace, and being "serious." 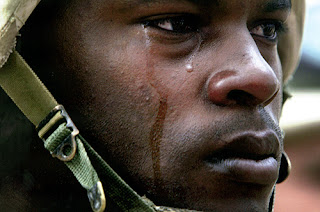 I know it's become a little personal blog tradition to drag this old chestnut out every year around this time, but here's what I wrote the day the Iraq war started, March 19, 2003.

I hope it doesn't sound like I'm only whipping this out again to sound morally superior or anything, because there is a larger point to it than that. I'm not looking to be held up as some kind of foreign-policy expert, and I'm not even demanding that people who were for the war back in 2003 all admit they were wrong and tell me how brilliant I am. All I want is for people to take war seriously, to realize that it has horrible consequences for everyone involved and that there's no such thing as an "easy" war, no matter what the people in charge tell us. I think a lot more people get this now than did four years ago, but there are still quite a few important people who apparently don't.

There seems to be this lingering insistence at the elite levels of our government and media that in order to be "serious" about national security, one has to be in favor of war whenever and wherever one is proposed. This is the kind of thinking that holds up someone like Joe Lieberman -- who fell in lockstep with the Bush administration's Iraq plans from the get-go and who has never once called for any kind of change or accountability for what has been almost universally decried as a disastrous policy -- as a "serious" thinker on foreign policy, while people like Rep. Nancy Pelosi and Sen. Patrick Leahy, who voted against the war resolution in 2002 and who have demanded that the Iraqi government actually be held to held to account for some of their promises and stated goals in exchange for the continued American presence there, as not serious.

Imagine that you come to me complaining of terrible migraine headaches, and I tell you (based on my years of advanced medical training) that the best way to cure this is to bang your head against a brick wall. You think this is kind of weird, but you decide to go ahead with it. You're banging your head against a wall, you're bleeding all over the place, you're cracking your skull, and people are coming up to you saying, "This is ridiculous! Stop beating your head against the wall!" But I'm standing next to you the whole time saying, "You just want him to stop before his migraine goes away? You're just not all that serious about helping him, are you?"

Look, I know that September 11 changed a lot of things about this country and how we perceived our need to act in the world, and I'm not saying that all war has to be dismissed out of hand; the invasion of Afghanistan, for instance, was immediately needed to oust a regime that had directly assisted al-Qaeda and aided in carrying out their terrorist attacks. But war is something that should be wielded only as a last resort, and it's clear that that's not how it was viewed with respect to Iraq. Bush continues to claim to this day that all diplomatic avenues had been exhausted with Iraq and that the country presented an imminent threat, but the example he uses to prove this point -- Saddam Hussein supposedly kicking out the UN weapons inspectors -- isn't even true, because it was the Bush administration who ordered the inspectors out so that they could start bombing. We could've pulled up short of an all-out invasion of Iraq; we just didn't want to. Why?

Now the target du jour is Iran, and we have people both in the blogosphere and in the government insisting that "all options remain on the table" with regard to attacking that country -- all options, evidently, except negotiation. There may yet come a time when relations with Iran deteriorate to the point where war becomes the only option, but how can anyone say that we're at that point already? And how can anyone who says that be considered "serious" about national defense when we're already overextended by major military operations in two other Middle Eastern countries?

Just think about what war means is all I'm asking, people. War is never an easy thing. War means thousands of people getting killed; war means billions, if not trillions, of dollars getting thrown into the fire; war means entire societies getting scarred for generations. As Sadly, No! so succinctly put it three years ago, War never doesn't hurt. If we've learned nothing else after four years of agony in Iraq, I hope we've learned that. But I wouldn't even be bothering to repeat this if I thought everybody had.
Posted by Astronaut Mike Dexter at 12:02 PM

Email ThisBlogThis!Share to TwitterShare to FacebookShare to Pinterest
Labels: war what is it good for absolutely nothin

You and everyone else need to understand one thing;
This enemy will not rest until we destroy them or they destroy us.
It is our very way of life they hate.
Check your facts before you or anyone else lump this into the Vietnam war.
Similar but NOT the same.
And yes I have been there once and I am preparing to go again.

I know someone who still stands behind The Shrub and the Iraq war and it just boggles my mind that he can do such a thing. Of course he is the type of person that seems to believe that winning is everything and the only way one can go about winning is to completely annihilate the opposition no matter what the cost.

My father faught in the Korean War and I can remember waking up in the middle of the night when I still lived at home to him having nightmares because his experiences there. He rarely speaks of them but after hearing about a few, I know I would never want to be in a position where I was responsible for making the decision to send someone off to war. You are so correct when you say "war never doesn't hurt".

Mr. Anonymous, you say "This enemy will not rest until we destroy them or they destroy us." This is all great and good if they were invading our country. But turn this around - we have invaded Iraq (and Afghanistan, in case you are referring to that conflict) and they are not going to rest until they have destroyed their own invading enemy. We have no business being in Iraq and should say "my bad - out of here" and stop being their enemy - they have enough internal conflict already. Our continued existance in Iraq gives lie to the defense we went in to depose Saddam. Exit strategy is what we should be fighting for.