Allow me to swipe a page from the late, great Billmon's book.

To undermine Iran, which is predominantly Shiite, the Bush Administration has decided, in effect, to reconfigure its priorities in the Middle East. In Lebanon, the Administration has coöperated with Saudi Arabia's government, which is Sunni, in clandestine operations that are intended to weaken Hezbollah, the Shiite organization that is backed by Iran. The U.S. has also taken part in clandestine operations aimed at Iran and its ally Syria. A by-product of these activities has been the bolstering of Sunni extremist groups that espouse a militant vision of Islam and are hostile to America and sympathetic to Al Qaeda.

One contradictory aspect of the new strategy is that, in Iraq, most of the insurgent violence directed at the American military has come from Sunni forces, and not from Shiites. But, from the Administration's perspective, the most profound -- and unintended -- strategic consequence of the Iraq war is the empowerment of Iran. Its President, Mahmoud Ahmadinejad, has made defiant pronouncements about the destruction of Israel and his country’s right to pursue its nuclear program, and last week its supreme religious leader, Ayatollah Ali Khamenei, said on state television that "realities in the region show that the arrogant front, headed by the U.S. and its allies, will be the principal loser in the region." . . .

Some of the core tactics of the redirection are not public, however. The clandestine operations have been kept secret, in some cases, by leaving the execution or the funding to the Saudis, or by finding other ways to work around the normal congressional appropriations process, current and former officials close to the Administration said.

A senior member of the House Appropriations Committee told me that he had heard about the new strategy, but felt that he and his colleagues had not been adequately briefed. "We haven't got any of this," he said. "We ask for anything going on, and they say there's nothing. And when we ask specific questions they say, 'We're going to get back to you.' It's so frustrating."

The speech had been proceeding for perhaps twenty minutes when a messenger hurried on to the platform and a scrap of paper was slipped into the speaker's hand. He unrolled and read it without pausing in his speech. Nothing altered in his voice or manner, or in the content of what he was saying, but suddenly the names were different. Without words said, a wave of understanding rippled through the crowd. Oceania was at war with Eastasia! The next moment there was a tremendous commotion. The banners and posters with which the square was decorated were all wrong! Quite half of them had the wrong faces on them. It was sabotage! The agents of Goldstein had been at work! There was a riotous interlude while posters were ripped from the walls, banners torn to shreds and trampled underfoot. The Spies performed prodigies of activity in clambering over the rooftops and cutting the streamers that fluttered from the chimneys. But within two or three minutes it was all over. The orator, still gripping the neck of the microphone, his shoulders hunched forward, his free hand clawing at the air, had gone straight on with his speech. One minute more, and the feral roars of rage were again bursting from the crowd. The Hate continued exactly as before, except that the target had been changed.

The thing that impressed Winston in looking back was that the speaker had switched from one line to the other actually in midsentence, not only without a pause, but without even breaking the syntax. But at the moment he had other things to preoccupy him. It was during the moment of disorder while the posters were being torn down that a man whose face he did not see had tapped him on the shoulder and said, 'Excuse me, I think you've dropped your brief-case.' He took the brief-case abstractedly, without speaking. He knew that it would be days before he had an opportunity to look inside it. The instant that the demonstration was over he went straight to the Ministry of Truth, though the time was now nearly twenty-three hours. The entire staff of the Ministry had done likewise. The orders already issuing from the telescreen, recalling them to their posts, were hardly necessary. 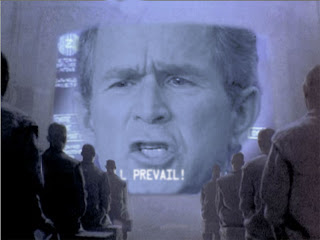 Posted by Astronaut Mike Dexter at 8:12 AM

Email ThisBlogThis!Share to TwitterShare to FacebookShare to Pinterest
Labels: politics, war what is it good for absolutely nothin

In the theme of 300, some Democrat like Pelosi should use the phrase "This is madness!" in an Iraq speech, only for Bush to pop up and yell "Madness? This...is...AMERICA!" and kick her down.

Seriously, someone should give you a medal or something for your selfless heroism in daring to criticize Big Brother Bush on your internet blog, since, you know, freedom of speech is now banned because it's 1984.

Cute dog, by the way.