Them that don't know him won't like him, and them that do sometimes won't know how to take him: the Oklahoma State preview.

All I will say by way of introduction is this: Man, I'm glad to be doing these again. 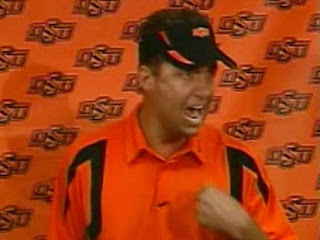 My team? Worthy of being a touchdown favorite over Georgia? THAT AIN'T TRUE!!!!

Last season: Romped to 7-0 and a #7 national ranking before incurring a respectable 28-24 loss to then-#1 Texas in Austin. From there, the Cowboys' only wins came against Iowa State (who would finish 2-10) and Colorado (5-7); they got blown off the field by Texas Tech and Oklahoma, then lost by 11 to Oregon in the Holiday Bowl to finish 9-4 and #16 in the sportswriters' poll, #18 in the coaches'.

Hate index: Four and a half. It's not like Oklahoma State has ever been one of Georgia's natural rivals, and an OSU grad I worked with in my first job out of college helped me stay sane in Lynchburg, Virginia, for the better part of a year, which was no mean feat. But I'm getting just a leeeetle bit tired of some of the B.S. I've been hearing out of Stillwater lately, such as the "Georgia's the one that has to be scared" talk from linebacker Andre Sexton and the silly score predictions from über-booster T. Boone Pickens. We beat y'all by three touchdowns last time we met, kids. T. Boone, you couldn't even bring yourself to stay for the whole game. Show some respect.

Associated hottie: Ashley Grinols is a native of the Oklahoma City area, an OSU senior, and a model who could be described as "not difficult to look at." 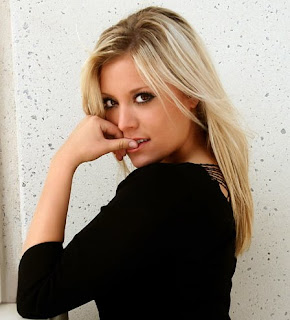 What worries me: Let's throw out the "Were Big XII offenses that good, or were Big XII defenses that bad" debate here: When your offense averages 488 yards a game and finishes sixth in the nation, as Oklahoma State's did last year, it's pretty good no matter how bad the opposing defenses were. And a trio of extremely talented skill players return for another go in '09: quarterback Zac Robinson, who threw for more than 3,000 yards and a 25/10 TD/INT ratio; tailback Kendall Hunter, who rushed for 1,555 yards at a 6.5-ypc clip; and receiver Dez Bryant, who caught for 1,480 yards and 19 touchdowns. Can you picture Georgia's defense from the second half of last season going up against an arsenal like that? I'm going to try not to if I can help it. 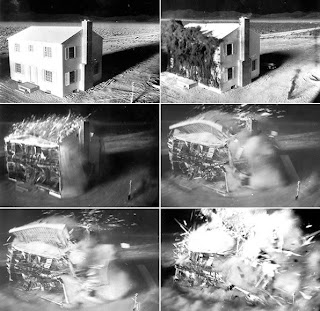 To keep the Pokes from running wild on us, the Dawg defense is going to half to demonstrate phenomenal improvement in two particular areas. One is our rushing defense, which allowed an average of 226 yards rushing over the last five games of the 2008 regular season. I'm cautiously optimistic that Mark Richt learned his lesson after backing off on full-contact drills due to injury paranoia last year; we did manage to hold Michigan State's Javon Ringer, who outgained and out-touchdown'd Kendall Hunter, to a mere 47 yards in the Capital One Bowl, and the reports I've heard seem to indicate that practices this summer have been altogether more intense than last year's. But even with six of last year's starting front seven returning, we've got too much to prove in this area to take anything for granted.

The other thing we've got to improve on is putting pressure on the opposing QB, and there's a lot of lost ground to make up there as well: After notching 35, 33, and 42 sacks the preceding three years, we took down the quarterback only 23 times in 13 games in '08. This year's top four defensive ends totaled only five sacks last season. This is another statistical category in which we deteriorated markedly over the latter half of the 2008 regular season -- only four sacks in the last six games, which is absolutely pitiful from the program that very recently produced David Pollack, Quentin Moses, and Marcus Howard -- so maybe increased aggressiveness in practice will pay dividends in this category as well. But again, we're way too far behind in the numbers to be assuming anything here.

What excites me: I don't think it's unfair to say that Oklahoma State's defenses have been as bad under Mike Gundy as their offenses have been good. Here's a series of numbers that should be keeping T. Boone Pickens up nights: 97, 89, 102, 94 -- the Cowboys' ranking in total defense among all D-IA teams the past four years. Pass defense has been a particular problem for the Pokes, who have allowed at least 200 yards per game on average and a 60-plus pass-completion percentage during that span. Even last year, when they brought back all but one of their starting DBs, they finished 110th in the country in passing yards allowed; this year the only returning starter is senior cornerback Perrish Cox. (Yes, Cox was arrested last week for driving on a suspended license, but you're crazy if you think Gundy's going to suspend him for so much as a series for something like that.)

In addition, the Cowboys are even lighter than the Dawgs in the sacks department, having taken down the opposing QB only 15 times last season. This all spells a relatively favorable situation for Joe Cox: If our offensive line -- probably the most experienced in the country after USC's -- can keep him upright, which they should be able to do, he'll have plenty of time to throw and a fairly porous secondary to throw against. Their defensive line loses two starters from last year, and our average offensive lineman outweighs their average D-liner by more than 20 pounds. 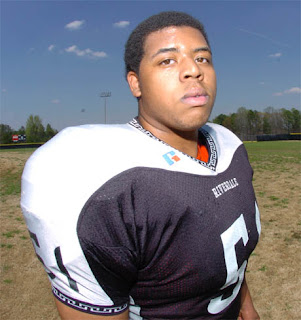 The wild card here is OSU's new defensive coordinator, Bill Young, who takes over at his alma mater after successful stints at Kansas and Miami. On paper, Young can only bring improvement to the Cowboys' ragged defensive situation, but how much improvement is, as Senator Blutarsky points out, open for debate -- he's got a much longer way to go in Stillwater than he did in Miami, and he's got to make up that distance against much tougher offenses than he faced in the ACC. Even for someone with Young's pedigree, it's a little much to expect him to spin a lockdown unit out of one that gave up an average of more than 500 yards to each team with a winning record it faced last season.

On the other side of the ball, as good as their offense is, the Pokes are not without their problems. Yes, Zac Robinson is a terrific quarterback, and yes, Dez Bryant is a superb receiver, but . . . beyond Bryant, who's Robinson gonna throw to? Here's what's happened with all the receivers not named Dez Bryant since the end of last season: