Poll dancing, week 4: I'm handing the rankings over to Leonard Shelby this week. 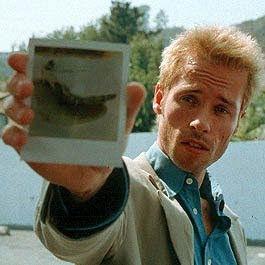 Four teams in the top 10 got whacked in the past week, and two more did everything they could to look lousy. Miami and Florida State, who looked invincible the week before, both got their asses handed to them. And that's even before you get to the LSUs and Michigans (and Georgias) of the world who keep winning in skin-of-teeth fashion. I'll reiterate a Twitter I did Sunday morning and say that coming up with a top 25 this week is like being the main character from "Memento": Trying to reconcile past events with more recent revelations will only lead to confusion and despair. And potentially the realization that you may have murdered someone.

Games watched: South Carolina-Ole Miss; divided attention between South Florida-FSU, Georgia Tech-North Carolina, and Michigan-Indiana; Virginia Tech-Miami; the first half of Florida-Kentucky, and the part where Tebow got concussed; Georgia-Arizona State; and a little bit of Houston-Texas Tech.

· First things first: Yes, Florida drops out of first place despite a 41-7 win. I don't feel great about doing that, and it may just be a delayed reaction to the Gators' less-than-impressive non-blowout of Tennessee. But with everything else as confused and up-in-the-air as it is, that might be as good a reason as any to doubt the proposition that Florida's still the best team in the country -- particularly if the concussion Tim Tebow sustained against UK keeps him out of action for any length of time. The past couple weeks, Florida has exhibited next to nothing in the vertical passing game; if that element and Tebow's rushing threat are removed from the equation, the Gators suddenly look like only a pretty good team.

· Then again, the way the rest of the Top 10 looked, "pretty good" is still enough to qualify as a title contender, apparently. And I know there's not much consistency in the way I treated the four top-10 squads who lost -- Miami only fell one spot after getting crushed by Virginia Tech, while Penn State's, Cal's, and Ole Miss's rankings plummeted by double digits (with the Rebels crashing out of the poll entirely). I guess I'm giving the 'Canes credit for playing a ranked team (and in horrendous weather conditions), as well as their stronger body of work leading up to that loss. The I-A opponents that the Nittany Lions, Golden Bears, and Rebels had played coming into last weekend are currently a combined 9-14, and there isn't a ranked team among them. 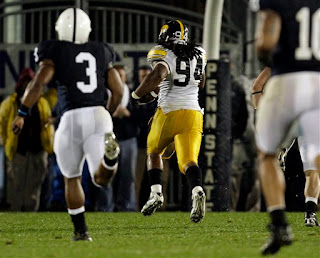 · Oregon, and Iowa, meanwhile, leap back into the poll by double digits themselves, while Cincinnati soars into the top five. Overreacting? Probably, but where else would you put them? The Ducks and Hawkeyes look almost nothing like the teams that slogged through such embarrassing games during opening weekend, and after knocking off high-ranked teams that had been gathering a great deal of conference-champion buzz, they both currently have as much reason to believe they'll win their respective conferences as anybody. The Bearcats, meanwhile, are probably the beneficiaries of another delayed-response correction, but they're 4-0 and have dominated a pair of BCS-conference opponents on the road. Who's to say they're not top-five caliber just because the conference they play in has a shitty reputation?

· In addition to the Rebels, everyone from #22 south drops out. Of those, Notre Dame at least had the decency to win, but needing a last-minute escape from a team Northern Illinois handled pretty easily is not the mark of an elite team. Texas Tech lost to a good Houston team on the road, so they at least get to hang around in the "next five" category. As for FSU and North Carolina -- get out of here, I can't even stand to look at you right now.

· Replacing those fallen teams: Iowa and Oregon, obvs; Georgia Tech, whose defense bounced back in a big way against UNC; South Florida, who can now lay solid claim to being, at worst, the third-best team in their state; and . . . 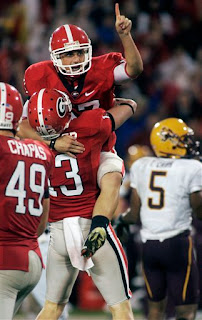 · . . . Georgia. Didn't feel any burning desire to rank them after yet another sloppy outing, but the vacuum in the 22-25 spots pulled them up despite their best efforts to gack away a win to Arizona State. I'm praying this hubris doesn't hurt us against LSU, but seriously, Dawgs, if you can't stop handing out turnovers like Halloween candy, the overly prideful prognostications of random jagoff bloggers are gonna be the least of your worries.

1. Alabama -- Absolutely crushed the same Bobby Petrino aerial attack that looked so unstoppable against Georgia. Clearly has the most impressive body of work of any of the SEC's top contenders so far.

2. Florida -- Blew Kentucky off the map for the first 15 minutes, then switched on the same autopilot they used against Tennessee -- which still wasn't enough to keep Tebow out of an ambulance, apparently. The Gators' passing attack wasn't operating at a very high level even with Tebow on the field; if he's less than 100-percent for the next few weeks, I'd almost be tempted to wait for Urban Meyer to just go triple-option until he gets healthy.

3. Auburn -- Gave up more points than they should have against Ball State, but the vast majority of those yards came in the second half, by which point the game was well and truly put away. Now comes the big test: whether Malzahn's spread attack can survive the meat grinder of a Monte Kiffin defense. 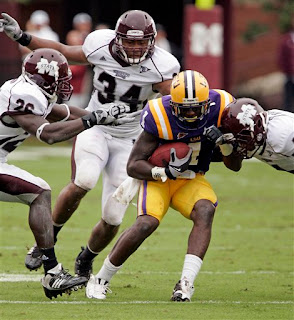 4. LSU -- I can't think of any team in the major conferences who's strung together four less impressive wins. And what the hell is going on with their running game? Only 30 net yards in Starkville?

5. Georgia -- Another win, but the pessimist in me is just sure that Georgia's turnover habit will result in a meltdown game sometime in the next month that causes call-in shows, newspaper columns, and comments threads to spontaneously combust with calls for various coaches to get fired. Seriously, just how long do we expect to keep getting lucky like this?

6. South Carolina -- Made the most of an obvious opportunity to be a trap for Ole Miss, but the fact that Spurrier resorted to touting victories over Kentucky in his postgame chat with Erin Andrews had to have been a little deflating for Gamecock fans just the same. 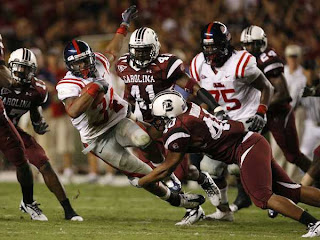 7. Ole Miss -- Way to erase that "Collapses when expectations are high" stereotype, Nutt. They kept the final score close, but otherwise that was about as bad a performance as the Rebels could've delivered in their first big test on the national stage.

8. Tennessee -- Somewhat ragged performance against Ohio on both sides of the ball, but the last time they played a MAC team they only scored 13 points. So that's progress, I guess.

10. Mississippi State -- Is Dan Mullen's rebuilding project a lot further along than any of us expected, or is LSU just that mediocre? Can I go with "all of the above"?

11. Kentucky -- Well, you did succeed in putting Tim Tebow in the hospital, Wildcats. You'll always have that.

How are Mizzou and Kansas ranked above Nebraska? NU has three blow-outs over weak teams but their only loss came at your #7 ranked team in the final seconds. Just curious.

I'm going to take the overly-optimistic approach and hope that Richt's squad won't have two underachieving years in a row.

Instead of waiting for the meltdown that will result from turning the ball over, I'm going to ask when will the Dawgs stopping coughing up the football so that they can achieve their true offensive potential, therefore giving the D ample and adequate time to rest and field to work with in order to begin shutting down opponents in the normal fashion (ie, after a kick-off instead of a pick inside the Dawgs 30).

Yes, that's how I'm going to choose to live this week.

Ohio State beats Illinois 30-0, and they don't move up, despite 4 teams you had ahead of them falling below them? Meanwhile, USC beats Washington State 27-6 and moves up 2 spots, Oklahoma plays nobody and moves up 2.

For that matter, compare the resumes of OSU and Oregon.....both are 3-1, OSU's only loss is by a FG to your #9 team, Oregon's was a whooping by the #6 team. Seem pretty similar to me, yet you have them separated by 4 spots in the poll.

What was the reasoning behind this?