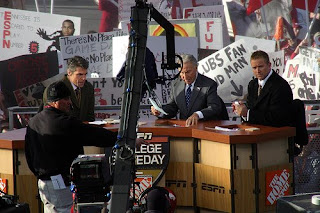 CHRIS FOWLER: We're back with "College Gameday" live from the Mall in our nation's capital, and it's time for Tuesday Selections. Let's start just to the south of us in Virginia, where it's a battle of two former governors, Republican Jim Gilmore and Democrat Mark Warner. Fellas, who do you like?

KIRK HERBSTREIT: Well, it's really no contest here, the Democrats have been fired up to take this seat ever since John Warner announced his retirement, and I think what you're gonna see is Mark Warner reaching across the line to stress his moderate credentials and his record on education. Gilmore really hurt himself during his term as governor by focusing too heavily on eliminating the state car-tag tax at the expense of a lot of other things, so I think Warner wins big today. Big.

LEE CORSO: Forgettabouttit! Here's a stat that'll blow your mind -- you know how much of a budget shortfall Gilmore left behind when he left office in 2001? Five hundred million. That's half a billion dollars, my friend. It ain't gonna be close. Warner, all the way.

FOWLER: All right, so we've got a consensus pick on that one -- let's head down to the 21st District of south Florida, the Fightin' 21st, where incumbent Congressman Lincoln Diaz-Balart is in a dogfight with Democrat Raul Martinez. Guys, who's your pick?

HERBSTREIT: Martinez has one of the better ground games in that part of the country, and he's done an excellent job of turning out early voters in Miami. It's gonna be close, because Cuba has remained a big issue down there even with Castro fading off into the sunset, but Martinez has energized a lot of people, and it's been a down year for the GOP in general -- Martinez, close. Close.

CORSO: Not so fast, my friend! Listen, I grew up down there in Florida, and let me tell you something, they haven't forgotten about Castro down there, and they ain't never gonna forget about him. Now, this district's changing, but a hard line on Cuba is still the way to go, so I'm saying Diaz-Balart hangs on against the challenger.

FOWLER: All right, both of you see a close game down there, but you're picking it different ways. Out in Minnesoooota, we've got another bar-room brawl of a Senate race between Republican Norm Coleman, the incumbent, and former "Saturday Night Live" writer and cast member Al Franken. Lot of bad blood between these two, and Franken has definitely been stirring the pot over the past few weeks. Will his celebrity be enough to get him over the top in this one?

CORSO: You bet! See, the problem with most challengers in Senate races is nobody knows who they are. But Franken's got great name recognition, plus he's riding those coattails of Barack Obama out in a state that Republicans haven't taken since -- hel-lo! -- 1972! Hel-lo! You wanna know how long ago that was? I was coaching at Louisville then. Al Franken's gonna ride those Obama coattails and upset Coleman in Minnesota.

CORSO: Coattails, baby! You got it!

HERBSTREIT: Well, he's definitely got some coattails to ride in that state, but if I'm in the Franken campaign, what I'm worried about is a kind of variation on the "Bradley effect" where people tell the pollsters they're voting Democratic, but then they get into the voting booth and they start thinking, "Jeez, you know, can I really vote for a guy who played Stuart Smalley on 'SNL'?" This is another close one, this race has been neck-and-neck almost ever since Franken announced, but again, his opponent has that bipartisan record, and I think Coleman hangs on to win a second term.

FOWLER: "Bradley effect," huh? Whipping out a little bit of that poli-sci knowledge you picked up at The Ohio State University, I see. OK, here's one that's been flying under the radar a little bit: the at-large House seat in Alaska.

FOWLER: Now, all the talk in the 49th state has been about two people: Sarah Palin, who of course was named John McCain's vice-presidential pick back in September, and Ted Stevens, the sitting U.S. Senator recently convicted on corruption charges. But Representative Don Young has been under investigation himself for taking bribes from an oil-pipeline company, so there's a lot of distractions swirling around as he goes up against Democratic challenger Ethan Berkowitz. Can Young fight through all the distractions and win for the nineteenth straight time?

HERBSTREIT: Well, you're right, there have been a ton of distractions in this race, not just the FBI investigation but the whole "Bridge to Nowhere" thing that he was right at the center of. Even with Palin being selected to the VP spot, all of Young's off-the-Hill issues have really become an embarrassment to this state and this delegation, enough that I think the Democrats finally break the streak here and pull off a win. Berkowitz's poll numbers have been phenomenal down the stretch.

CORSO: Lemme tell you something I learned many, many times as both a player and a coach: Never mess with a streak. You just don't do it! Now, Young's got problems, but that "Bridge to Nowhere" ain't one of 'em -- people up there in Alaska love their pork-barrel projects! They love 'em! And they see Young as an independent, stick-it-to-'em kind of guy, and they like that. This'll be the closest race Don Young has fought in a long, long time, but I ain't messing with the streak, I'm goin' with Young, nineteen in a row, over the Democrats.

FOWLER: All right, some nice disagreement on that one, and Coach, you're saying Young's problems, he might actually be able to turn them into a positive up there in the Last Frontier. All right, we've come to the big one, the reason we're here in Washington today, the presidential race, Barack Obama versus John McCain. Both of these guys come into this race battle-tested: They fought off very tough primary challenges -- Obama from Sen. Hillary Clinton, McCain from a pair of governors, Mike Huckabee and Mitt Romney -- and this race has gotten nasty down the stretch. The general consensus seems to be that Obama's going to be in control here, but things have tightened up a little bit these last couple weeks -- guys, time to make your selection: Obama versus McCain. Who's your pick?

HERBSTREIT: Well, these are two very talented, very well-liked guys, and they're pretty equal in their strengths and weaknesses -- Obama is young, he doesn't have a lot of experience, but that may not end up being that big a problem in what, again, is a really down year for the incumbent party. And when two candidates are this close, you go to matchups, and I think one of the biggest mismatches that Obama has been able to exploit in this campaign is at the VP position, Senator Joe Biden versus Governor Sarah Palin. Palin was one of the top recruits in the country when McCain tapped her to be his "running mate of the future," and there was all this buzz about her in the beginning, but she's really fallen off over the last few weeks, and you're starting to see some of her weaknesses exposed. She's not good in one-on-one interviews, she's been slow to pick up McCain's playbook on foreign policy, and her attempts to attract female voters, surprisingly, have backfired because those voters don't see her as qualified. Now, Biden isn't a guy who's gonna win a lot of races for you, but he's not gonna lose a lot of them for you, either: He's experienced, he attracts those voters who would otherwise be hostile to Obama, and his mistakes have been a lot less costly than Palin's. That's a big part of why I'm picking Barack Obama to win today -- I'm gonna say by at least seven points, maybe even more.

CORSO: Double-not-so-fast, my friend! Palin's still a raw, untested recruit at the VP slot, but she's already become the emotional leader of that ticket, getting the base fired up and really sticking it to Obama on some of his positions and his prior connections. But the matchup I'm really looking at here is tax-cut proposals. Barack Obama has been coming out fast and furious on this one, proposing a tax cut that would benefit 95 percent of American households. Ninety-five percent! Man! Now, on the other hand, McCain wants to continue the Bush tax cut for top wage earners and throw in an additional coporate tax cut. You kiddin' me? At a time when everybody's mad at Wall Street for the bailout? Forgettabouttit! I know who I'm pickin' . . . 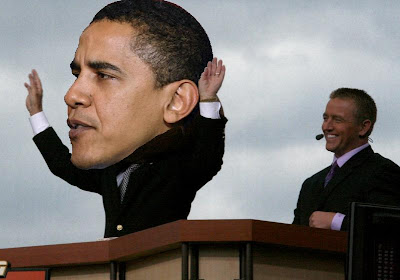 FOWLER: Coach Corso, with the surprise pick, as always. Folks, that's "College Gameday" for this Election Day morning, stay tuned to Mark Jones and Bob Davie with the Elizabeth Dole-Kay Hagan Senate race, plus Bachmann-Tinklenberg, live from Minnesota on the Deuce. We'll see you later on tonight -- don't forget to vote.
Posted by Astronaut Mike Dexter at 7:00 AM

Ha! Josh, I had the same reaction but from the other side of the aisle, which might explain the slight sheen of sweat on my forehead.

I wonder if Doug's got his opposition colors sorted out today.

God willing, Dole goes down in NC today... But the same retards who kept Jesse Helms in the Senate are the same yahoos who will likely keep her in office. If only Charlotte and Raleigh could beat the eastern part of the state into submission.

Speaking of, Charlotte's mayor is running for governor, and in a move McCain would love, has shifted from a very centrist Republican to a conservative nutter in less than a year to win votes.

I'm just hoping the Libertarians can muster 2 percent of the gubernatorial vote so the Democrat-led stranglehold on third party ballot access will finally end.

I was hoping you'd do something like this Doug. Hopefully I'll have something happy to write about in the morning.

Corso's usually wrong...but I remember that bastard putting an elephant head on in Athens this year too...
The two nasty losses will be a lot easier to take if Cotton Hill and Caribou Barbie get sent packing...

I totally Baracked the vote today.

You are just toooooo good.

You get me soooooo wet.

Oh, and the elctoral votes coming in not looking good for the McCain.

I'm a small business owner and if Obama is elected he's going to totally fuck me up. I don't care if hes white, black, purple, orange. I just hope he doesn't become President.


Yeah, both will seem rather odd. Not meaning that this is bad. But we do have to accept this.

CORSO: Coattails, baby! You got it!

On a serious note. I do hate Herbstreit. He's a back stabbing bitch. I do remember.

OK trish, lets just get nasty and have wild sex tonight. You did come on to me the other night.

I forgive you for voting for McCain.

I think I need to change the channel

Don'ts I gets a check too? Where be my dam check!

We'll just go ahead and leave you out of the progress. Enjoy your gay marriage bans - should be good for tourism.