Poll dancing, week 12: One of those "just glad it's over" weekends.

· Another shuffle in the top three sends a couple teams down a notch apiece -- despite the fact that neither of them actually lost last weekend -- but Tony Barnhart is right: At the rate they're playing right now, Florida is capable of beating anyone in the country, and badly. Here was a South Carolina team about which everyone and their brother (including me) was like, "Plus-21? Oh, that's way too big a spread," but the Gators had that covered by the end of the first quarter. Woe be unto any Bama fans who think that any of Urban Meyer's guys are going to be intimidated by a #1 ranking.

· Other than that, the top 15 is pretty quiet, save for Boise State and Georgia switching places (sadly, I had to do something to the Dawgs after barely escaping Auburn with their lives) and Oregon State moving up after dispensing with California. Seriously, how awesome would it be for someone other than the Trojans to win the Pac-10 this year? (The mere fact I said that, of course, means the Beavers are going to lose 54-7 to Oregon this weekend.) 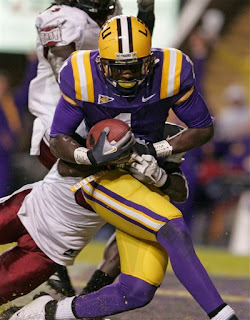 · Below that, it's the usual muddle: Maryland rockets up way more slots than they probably deserve, but the fact remains that they're 7-3 and have been knocking off ranked teams like it was their job; Boston College gets back in after whacking Florida State; and LSU drops five spots after spotting Troy a 31-3 lead on Saturday, a feat so dubious that even Troy's Sun Belt opponents have been hard-pressed to match it. (Of the SBC teams they've played, only hapless North Texas ever trailed the Trojans by 28 points or more.)

· Newcomers: Maryland, BC, Connecticut (who apparently forced Syracuse to finally fire Greg Robinson already), Da U, and Oregon. I've gotten a few comments asking why 10-0 Ball State isn't in here, and that mainly has to do with the not-exactly-earth-shattering revelation that the MAC sucks, but I'll cut you a deal: If the Cardinals beat Central Michigan on Wednesday night, whether it's by one point or 30, they'll be in my next ballot. Promise.

1. Florida -- In my neck of the woods, some Alabama fans -- certainly not a majority of them, but they're there -- are already looking ahead to the national title game. Oh, what fools these mortals be. 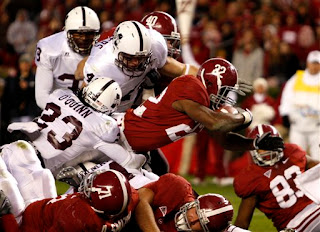 2. Alabama -- They're not really taking anyone out behind the woodshed and just beating the crap out of them from the opening gun these days, but then again, that was a complaint frequently lodged against the '92 team, too.

3. Georgia -- Sloppy play and ill-timed defensive breakdowns are turning what should be blowouts into close games. Georgia Tech is good enough to make them pay for this in a couple weeks if they don't get it straightened out.

4. LSU -- The fact that they still rank this high after nearly being humiliated at home by Troy tells you just how much of a step the SEC as a whole has lost compared to last year. 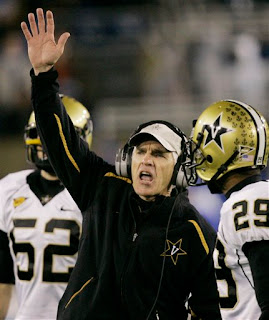 5. Vanderbilt -- Bowl-eligible for the first time in more than a quarter-century -- honestly, I was starting to think they didn't have it in 'em -- and they've still got a chance to pad their bowl résumé against Tennessee and Wake Forest.

6. Ole Miss -- Total offensive domination, and yeah, it was against ULM, but a sixth win is a sixth win.

7. South Carolina -- From very early on against Florida, they looked desperate in a way that you don't usually see Steve Spurrier teams look, and I'm not just talking about the dumbass throwback attempt on the kickoff return.

8. Kentucky -- Wonder if Rich Brooks is already trying to come up with ways to drop 50 on Tennessee in his final regular-season game.

9. Arkansas -- I kind of figured their loss to South Carolina did 'em in as far as bowl eligibility, but would you really be that surprised to see them knock off LSU at this point? 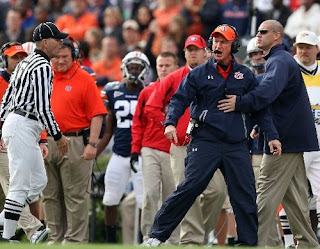 10. Auburn -- Played with a ton of heart against Georgia but managed to match the Bulldogs stupid mistake for stupid mistake. If I were Alabama, though, I'd be wary of a team that's playing for both bowl eligibility and, potentially, their coach's job.

11. Mississippi State -- Couldn't depend on John Parker Wilson to hand the game to them this time around. Hey, it happens to the best of us.

12. Tennessee -- If they can't get up off the mat any better than they did against Wyoming, then a 3-9 record and the title of "Worst Team in Tennessee History" are all that await them. Does anyone in Knoxville even care at this point?
Posted by Astronaut Mike Dexter at 2:59 PM

As I understand it, if Oregon State and USC win out in conference - which would require Oregon State to beat Arizona and then Oregon, and USC to beat UCLA - then they will be co-champions of the Pac 10 and Oregon State will go to the Rose Bowl because of the tie-breaker of having beaten USC.

This isn't unusual - USC split the conference championship with Arizona State in 2007 and Cal in 2006, but proceeded to the Rose Bowl in both cases due to victories over the co-champions.

If that proves to be the case, then SC fans might be able to enjoy something different in the form of an at-large BCS bowl bid. It would certainly mix things up a bit.

I agree with you that Florida might be the best team in the country, but by placing them above not just one but two legitimate unbeaten teams (one of those being a team that beat the team they lost to) shows that you are placing value on what might be rather than what is. Should Alabama or Texas Tech lose now there will be no redemption. Why does Florida deserve that? Because they are playing better now? They could run up three-hundred points on someone but that would not change the fact that they lost to Ole Miss.
In the power poll that's one thing - it's a subjective thing. But in an actual ranking I believe you have to give credit of the whole body of work and reward style points only after looking at wins and losses.
Between Alabama and Florida that will work itself out in a couple of weeks so ultimately it won't matter, unless you consider that if Alabama loses it will fall farther down the poll than Florida would relative to the top spot. Then again Alabama has to get past an Auburn team that gave Georgia everything they wanted.

In the SEC championship game Florida will do to Alabama what Alabama did to Georgia except Alabama won't score 30 points in the second half to make it close.

Florida is the best team in the country right now.

Alabama just thinks they are.

For the past few weeks it's been like a mantra for most sports reporters: "Florida's playing the best football right now." I was a little disappointed that you had to fall in line with that assumption. Just because they've beaten the crap out of mediocre (counting LSU) teams with the exception of Georgia does not make them a great football team. They play Citadel (!) next and then FSU. And we're all going to say they're great because they will more than likely rack up 50+ points in each game.

I know we can just wait a few more weeks before all this gets sorted out - so why bother jumping them ahead of the top 2 teams based on assumptions?

Finally some Mid-Major (low-major?) Love! Go Cardinals! Why do I get the feeling that once you put Ball State at #25 I will feel an empty sense of self? I'll get over it.

Georgia would beat the 6 teams you have ranked above them over half the time on a neutral field. Do you really think Boise St. is better than the dawgs? While we have had some of the most ugly wins I have seen, a road win at Auburn is never something I am going to bitch about. We are currently 9-2 with losses to the #1 and #3 teams in the nation. It could be a hell of a lot worse.

Florida is going to kick the shit out of a mediocre and #1 ranked Alabama team in Atlanta.

Who is going to beat Florida? Texas Tech?

Wait, was Quantam of Solace good? I want to see that sooooo bad! I'll have to wait for it to come out on the cheap Chinese DVDs.

If Georgia were a Bond villain, which one would it be?

Boise State's strength of schedule is south of 100th and, Utah's is about 75th. Georgia's SOS is currently 6th. (Sagarin)

Boise State has (1) BCS school on it's schedule and Utah has (2). If these teams want to play the big boys on bowl day they need to play a schedule with at least 5-6 BCS schools.

There's 20 teams in America that could easily run either's schedule.

just because alabama isn't putting up the same numbers as florida doesn't mean florida is better. how can you put them ahead of undefeated alabama? or do you just think they're better because of the ass beating they gave you in jacksonville? in case you forgot,
41-30(31-0 halftime)ROLL TIDE!